Zola 2020 is an American biographical comedy-drama film directed by Janicza Bravo and written by Bravo and Jeremy O. Harris. It is based on a viral Twitter thread by Aziah “Zola” King and the resulting Rolling Stone article “Zola Tells All: The Real Story Behind the Greatest Stripper Saga Ever Tweeted” by David Kushner.

Zola is about a stripper name Zola, who embarks on a wild road trip to Florida with a new stripe er friend Stefani. It might be based on a Twitter thread. That could be true. Could not be who knows?

But the thing about it is it’s played out in fantasy, fairy tale type light all taking place in Florida. And the way that they were able to do those dynamics will bring these characters, the lights just to score the cinematography and all the different moments that they have within one another.

It feels like a really messed up storytime that you would hear from, like, your friends. It was quite interesting what the director Janicza Bravo was able to bring in here and the way that she was able to leave it and really bring it to life here.

But that fantasy element to this and the way that the score in the cinematography kind of all infused into here, were some of the best parts about this movie and really one of the reasons that it kind of worked for me in its tone.

This is kind of a hard movie to watch. It is a dark come comedy, and at times it’s very dark. And I have to give a major shout-out to the performances in here because they go places that are very outlandish and out there. And I was just sitting there going, God, what are they doing?

One of the performances you must highlight here is Riley Keough, who’s really had a phenomenal time within Under the silver, like really looking forward to seeing her in the Lodge, and Zola she takes it in such ways.

She does stuff in here that I’ve rarely seen actresses do, and it’s disgusting. It’s straight-up disgusting, but you have to give her a shout-out. And that performance in the way that she is able to play off this role as Stefani so greatly.

Of course, Taylour Paige as our main character, Zola is able to intertwine into this story in such a way, feeling like she belongs there, but at the same time, also feeling like she doesn’t think she needs to be there.

And she doesn’t. She gets herself mixed into this whole thing because of Stefani, and it really turns into a really dark ride. And Zola is able to take it into different dynamics.

And the chemistry between her and Stephanie is great. And the way that they were able to play off one another, it’s just Super.

This feels very original, but at the same time, feeling real. Even though it does feel like a fantasy at timesing, we don’t truly know what was real, what wasn’t.

The way that it’s able to play off in those lights and really take to it was some of the most impressive things that I think the director in here was able to grab onto.

It’s a fantasy made to feel like a messed up fairy tale that I kind of ate up every single second of it. It’s audacious and has you grossed out at times laughing at others, but all at the same time, you’re saying what? The F.

Janicza Bravo showcases her amazing talents here. And really, the performances here bring this movie to life with its eccentric characters.

This is a very different type of movie. It’s not going to be for everyone. I feel like this is very much more for millennials and Gen Z type stuff, which can work for that light.

And really, my only issue with the movie was quite the ending. The ending was a little bit too abrupt, and I knew it was gonna end there.

I was just hoping that they would add more to where all these characters were by the end, but still, it’s abrupt. It’s based on a Twitter thread. What more can I say about that?

I thought The way that they were able to infuse all that worked perfectly. And really taking a little bit of a two-hour venture into this messed up fantasy, or, may I say, Messed up Fairy tale was quite an impressive feat.

So I am going to give Zola a C. 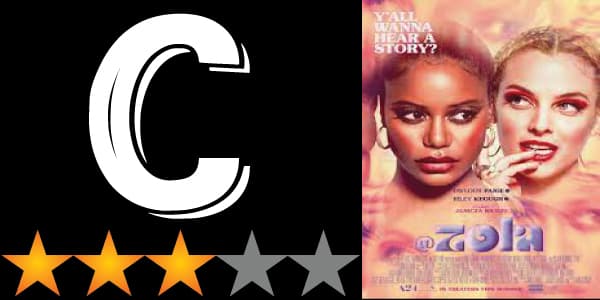 Zola movie’s release date in Theaters is on Jun 30, 2021. So if you got the chance to watch it comment below with your opinion about this movie.

Guys thank you so much as always for reading the review of Zola 2021. See you next time.

Check out the trailer of the new mystery, thriller, comedy, drama film Zola 2021.