Today I’m gonna be reviewing this series that has been heralded as a cult classic by many. It’s called Xavier Renegade Angel, which came out back in 2007 run for two seasons, and it ended its 20 episode run in 2009.

And it wasn’t necessarily a series that was appreciated when it came out. I think a lot of people who really praised the show probably discovered it afterward of its release, and maybe also some people start to appreciate the uniqueness of the show in retrospect.

So Xavier Renegade Angel is a comedy show which is done in 3D animation. There’s also a combination of different types of animations that you will be seeing in the series.

But mostly 3D, which reminds me of Second Life, and it’s really a random or someone the second live clips and randomness that I’ve seen in the past.

But one of the very key things about Xavier Renegade Angel is when we compare to other American comedy animation is that it is deeply ingrained into Internet culture.

While I don’t think the themes or subjects are necessarily Internet-related, but it has definitely a key connection to this sort of Internet type of humor of Fortune and I’ve more places than any type of show that has ever made.

I guess South Park is pretty much the closest thing that you can come to internet culture, but that is even, like, very milk toast.

Which is I guess they take their stories, which would be, like, told on Twitter or Facebook. And you know the conversations that happen on different social media are very different.

What is talked about in Twitch versus YouTube versus Fortune. The everyday topics are very different, and the language and they’re kind of like the proper language that people use.

There are a lot of age caps and stuff like that. And Xavier Renegade Angelis definitely, like, a manifestation of the Internet’s dark side of things and all of the subjects that it’s really going through.

And the episodes are only 11 minutes long, and there are 20 episodes in total, and there’s not really I guess in each season there’s a bit of a path that Xavier Renegade Angel is going through in the world, it’s episodic.

There are connections between the episodes in a loose space, but it’s more so like there’s maybe, like, a general theme in the first season is finding who killed Xavier’s father at the conclusion of that was totally ridiculous.

So I guess I should explain what type of humor we are talking about and what type of character Xavier is. What is the kind of the premise of the world.

So this takes place in America. At least some of the episodes do. Some of them might take who knows where. The series is extremely like a big combination of different types of comedy themes.

It is by far, like, surreal comedy, like, really extreme serialism mixed with black comedy and absurdist humor. And there is a lot of these sort of psychedelic type of elements too.

Because the character is sort of a weird humanoid, which is a pseudo shaman in a path of not really enlightenment.  Well, I guess this is seeking what is life and his own path.

And he’s extremely self-absorbed, and most of the places he goes to, he goes to kind of, like a different town or a city in each episode, and then he just fuck around there and gets into trouble.

There are so many episodes where he can get beaten up. It’s a very nice gimmick, which wasn’t that used in the season, too, but many scenes where it just gets randomly beaten up. But I truly enjoyed those.

And he just like, he goes into the city, he sees some things happening, and then he’s like, I’m gonna help these people into this real path, and then he ends up messing up things most of the time.

It’s really hard to describe these themes because they are so absurd in so many levels. There are subjects about bestiality, anarchism, very philosopher series, pedophilia, medicine, abuse, necrophilia, incest, racism.

If some of the episodes do have kind of, like, a deeper meaning to them, and it’s not necessarily very clear to see what is the meaning of each episode per se.

It’s something it’s just trying to be as very absurd as possible. And that’s why it has all of these, like, edgy scenes without feeling really edgy. Some of the staff is just really, really crash and legitimately laughed.

And many times at some of the scenes, it’s purely entertaining. Some of the things are, though, kind of like borderline creepy. It’s really, like, going in the surface of creepy.

And, like, at some point, it just gets super creepy and it’s not laughing anymore. And I really like, what’s really on the edge? And some of those episodes where I get like, okay, I’m not sure is this funny or creepy.

And it’s just an interesting show to me because it kind of reminds me of, like, Second Life and some of those Johnny Quest ready scenes and the animation style it looks kind of bad to a lot of people, but I think it was actually really well made.

But the backgrounds are just kind of like random and put out there, and it’s really focusing on the comedy of things rather than being visually impressive.

But I got to say that word like segments, which kind of like our been buying, bending and interesting even in the modern-day standards.

And I would really love to see a return of this sort of Treaty animation in comedy style. I think it’s probably to a degree to kind of affordable to do.

I don’t exactly know. I think because you can store animation and face movements and save them and play them again afterward.  So you don’t have to reanimate stuff later on.

So I think there’s a lot of aspects to 3D animation with this sort of game-style type of graphics, which allows you to repeat frames.

And things like this, which can be very convenient in terms of producing the series and a faster pace or more cost-efficient way.

Xavier Renegade Angel while it may seem like an absurd meme Fest, I guess it makes its own memes. It’s not really like borrowing stuff like South Park is from the mainstream.

I think a lot of the objects that it has no parallels to modern-day events that happened back in 2007. There are just general themes that I mentioned about bestiality anarchism Christianity philosophy.

And I guess all of the episodes are philosophical in certain degree, and in some of them the main character is very philosophical. But it’s just it’s a very entertaining show, but it’s not for everybody.

It takes a certain type of person to appreciate this level of humor. It’s tailored to a very big nation, that’s why. It probably hasn’t gained the mainstream appeal that it has.

But in terms of, like, everyday episode quality, it was pretty high level compared to any other comedy that I’ve seen. While I do appreciate shows like South Park, it does have a lot of bad episodes, especially like the earlier seasons. were pretty garbage. Let’s be honest about that.

And Yeah, were there two types of humor that I disliked? Well, I’ve never been really a fan of toilet humor, but even Xavier Renegade Angel kind of like re innovated that type of humor and kind of made its own and packaged it. It has been a bit better sense that it was kind of like smarter or something like that.

And also, like, musically, it was pretty interesting. There’s this fluid music that is going on to start a spiritual thing, kind of like trying to give you the vibe that the spiritual mission going on, and in a kind of way there is.

But then it gets to the absurdities. And Xavier is an interesting character. I mean, his background story, what does he look like? That and all of that. There’s a lot of mystery around him.

And the zombies are very self-absorbed burst. And he has a lot of parental problems and kind of like the main plot of the first two seasons are very heavily related to the death of his father and also his connection to his mother.

And those are going to be something that kind of is touched upon on multiple episodes. But I wouldn’t say that this is the premise of the series whatsoever.

Whatever I am going to give Xavier Renegade Angel a C. 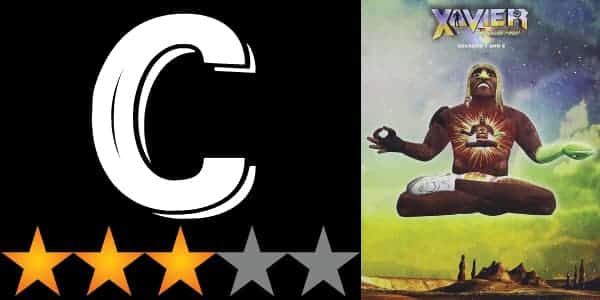 You can watch the Xavier Renegade Angel Series on Amazon, if you got the chance to watch tell us what you think about it in the comments below.

Guys thank you so much as always for reading the review of the Xavier Renegade Angel TV Series. See you next time.