Voyagers 2021 Movie is about a multi-generational mission among astronauts results into unnatural deaths that leads to suspicion of one another.

Voyagers 2021 is an American science fiction film that was directed by Neil Burger and its stars are   Colin Farrell, Tye Sheridan, and Lily-Rose Depp. And it is about a crew of astronauts on a multi-generational mission.

A character-driven story, set in the near future revolves around a group of people who are sent on an epic mission. They struggle as they explore new worlds and navigate uncharted territories while battling not only what’s outside their ship but also those within it.

This crew of astronauts descended into paranoia and madness as they weren’t sure what was real or not. They were on a multi-generational mission to explore other planets in the universe but there’s no telling how long their journey would take.

It’s hard to know what is real when you’re in deep space and everyone around you starts dying. One minute, your crewmates are happily chatting away about their day; the next they’ve stabbed themselves with a screwdriver or pulled out an air hose for no apparent reason. As people begin turning on each other as well, paranoia sets in and madness follow close behind – but can anyone be trusted?

The original release date of this film was set for November 25, 2020. But the film has been moved back to April 9th 2021 because of COVID-19 pandemic. I can’t wait to watch this movie and tell you my opinion about it.

Today, we are going over the new sci-fi film “Voyageurs”. The age-old question of nature versus nurture is pondered on a spaceship headed towards a mysterious new planet. But which one will prevail? And does voyagers explore this in a satisfying way? Let’s find out.

The film is written and directed by Neil Burger and stars Colin Farrell, Tye Sheridan and Lily-Rose, Depp and Fionn Whitehead.

A crew of astronauts on a multigenerational mission descends into paranoia and madness. Not knowing what is real or not.

Earth is drying out and becoming completely uninhabitable. So a group of scientists came together to race against time to find a solution. They found a planet that humans could survive on. But there is a problem and that is it’s going to take 86 years to get there.

Worried that a group of experienced astronauts would revolt because they missed Earth, they have taken a group of babies at their inception, isolated them, and trained them as they grow older to become pioneers of this mission.

Voyageurs follows this group of teenagers as they head out into the unknown, trying to grapple with the fact that they might not ever live to see this planet that they are headed to. And if that’s the case, does their life even have a purpose?

Going into Voyageurs, it had become one of my most anticipated films of the year. The trailer absolutely blew me away. The young cast was stacked with talent and Neil Burger, who gave us two films I adore in Limitless and The Illusionist, was helming it. So to say that my expectations were sky high would be an understatement.

Voyageurs is really quick in explaining this premise to its audience. It really feels like the filmmakers were just trying to rush through the exposition because they just wanted to get to the good stuff. Because once we get on that ship and start our voyage with these kids, the pace never lets up.

Two boys on the ship who become our leads. Played by Tye Sheridan and Fionn Whitehead discover that the blue liquid they’ve been drinking all of their lives is actually a medication that controls their impulses, curbs their sexual desires, and it numbs their mind.

In curiosity, these two boys decide to stop drinking the blue and in turn, this sets off a series of events that could quite possibly destroy the mission at hand.

As our voyagers start to feel things and discover their true selves, the question of nature versus nurture becomes the overarching theme of this movie.

Will they continue to follow the rules and stay civilized because that is how they were brought up? Or will they let their primal instincts and their ID take control because that is who they truly are?

Voyageurs takes this and runs with it, creating an intense and visceral experience that revels in psychological warfare.

The young cast is all good here, especially Fionn Whitehead, who once again after this and don’t tell a soul, proves that he can play one hell of a nuanced and terrifying villain.

Some people are going to complain that the characters lacked depth. The acting is bland, and some of the characters, motivations, and decisions don’t make much sense.

But you have to take into account the plot of this film and why that makes sense.

These kids have pretty much-been robots their whole lives and are just now experiencing the world for what it is for the first time. These characters are not going to be overly complex because they were bred not to be.

I was so on board for most of this film. It is beautiful to look at the sterile white production design juxtaposed with the neon lighting, the fervent tracking shots that really escalate the action. And Neil Burger really knows how to create a slick and polished final product.

I was also transfixed by this film’s meditations on morality, social politics, and the eternal battle of good versus evil.

But as Voyageurs came to a close, I couldn’t help but feel let down by it, disappointed that Berger had such a cool concept and ideas but didn’t really take them anywhere.

I also feel like Voyageurs didn’t take any chances. This could have really worked as a hard, R provocative, and racy film. But as is, it’s so sanitized that all of its fascinating concepts get lost in translation.

And the end really could have left us with an impact-full gut punch for a conversation about these topics to really flourish afterward, but what we get here, in my opinion, is a total cop-out. 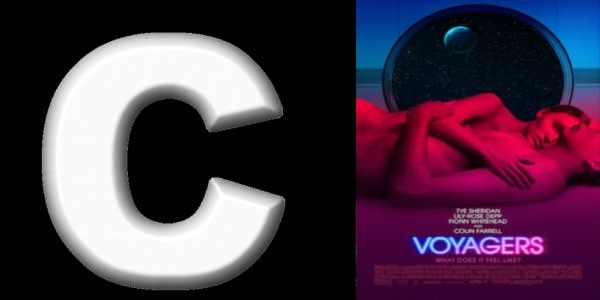 With an intriguing premise heavy themes and a fantastic cast of Up and Comers? Voyageurs should have been an all-out instant classic, but unfortunately, it is far from that.  So we’re just going to have to settle for the entertainment that this little sci-fi popcorn thriller provides.

Guys Voyagers 2021 film will be released in theaters this Friday, April 9th.  So don’t forget to check it out and tells your opinion about it.

Thank you so much, everyone, for reading the review of the Voyagers 2021 film. See you next time.