Check out the review of the new Horror Comedy film Vicious Fun. This film feels like it will live on as a cult classic or even something more.

Vicious Fun is a Horror Comedy film that is directed by Cody Calahan and written by James Villeneuve based upon a story by Cody Callahan. It stars Evan Marsh, Amber Goldfarb, Ari Milen, Julian Ratings and David Kostner.

Can he match wits with five killers and make it through the night alive? Stuck with only two options kill or be killed. Joel will have to find his inner serial killer and muster a hidden strength to defeat the maniacs in his midst.

Remember that film that came out a couple of months ago called Willis’ Wonderland that caused a huge commotion within the horror film community and the hype train kept growing and growing?

Well, I see this happening for vicious fun and no shade at all to Willie’s wonderland, as I quite enjoyed that movie. But this is a far better crafted and crowd-pleasing film than that one.

As the movie started, I was completely enraptured by the incredible 80s synth score, which continues to impress throughout the film and really transports you into the era.

I was a bit worried at first glance, however, because the lead character, Joel, played by Evan Marsh, came off as a bit of a fanboy in cell and I don’t normally like characters like that.

But after a few minutes and multiple jokes landing from his end, I realized that Marsh was completely in control of his craft here.

His comedic timing is so on point and natural that even though the character starts off as an annoying move at first you cannot help but fall for the guy.

We are quickly introduced to this group of serial killers who are at this self-help meeting because of their addiction to killing.

This is such an ingenious setup and rife with possibilities and vicious fun film luckily take advantage of all of them. Joel ends up joining a sort of alliance with sole female serial killer Carrie, played by Amber Goldfarb. And this is where the film really starts to grow.

As the chemistry between the two actors is fantastic. They really are able to bounce off of each other so well.

It also helps that Goldfarb is absolutely perfect in the role, creating one of the most badass female horror characters in recent memory.

She’s funny, brutal, mysterious, and has a fascinating backstory that we get just enough of but yearn for more.

What I also really appreciated about this film, that popcorn a horror rarely seems to deliver on is a full character arc for our lead Joel.

We see him grow and change throughout this one insane night to become someone fully different than when we first met him.

He is able to find something that he never knew existed within him to reach his full potential and become a hero you can root for.

The serial killer characters. Here are all tropes of the genre, but are distinct and different enough for you to enjoy watching them take their wrath out on Joel and the unsuspecting victims that get in their way.

We have a Chinese ninja like a cannibal, a Jason Voorhees campground killer, a soulless accountant type who’s cold and calculating and also enjoys dressing up as a clown.

And last but certainly not least, we have Ari Millan’s Bob, a slimy, twisted chameleon who impersonates others to take his vengeance out on young women.

Milen, who shined as the villainous male clone in the outstanding sci-fi series Orphan Black, steals every scene that he’s in.

Bob is a vile piece of work and you can see what a blast million is having portraying him, especially in a scene where he is dancing or more like contorting to jukebox music. It’s like the actor was born to play the villain.

Every moment of vicious fun. You can feel the passion for the project in front of and behind the camera. For such a low-budget film, the movie is so slickly shot and let the performances are all outstanding from top to bottom and the Gore effects are impressive as hell.

The only complaint I have with the movie is that it definitely drags in pacing around the halfway mark. When our protagonists are stuck at a police station.

It almost feels as if the film completely loses its momentum for a few scenes before jump-starting back again with a vengeance.

Also. The Vicious Fun movie is completely self-aware and exists in this meta-universe that might turn off some people who aren’t fans of the genre. So please keep that in mind before you decide whether or not to watch it.

There is a feeling that you get while watching this flick that it was made by fans for the fans in the best way possible.

The images and Easter eggs to classics before it and just for the horror community in general, show you that Vicious Fun knows exactly what it is and who it’s for and delivers everything that it promises.

The movie also lends itself well to a number of different ways to expand this universe that even further my excitement and commitment to this property.

There is no chance in hell that this does not become a cult classic. And I am so elated for all of my other Greyhound horror fans and movie nerds alike to come together to celebrate vicious fun.

So I am going to give Vicious Fun Movie a C. 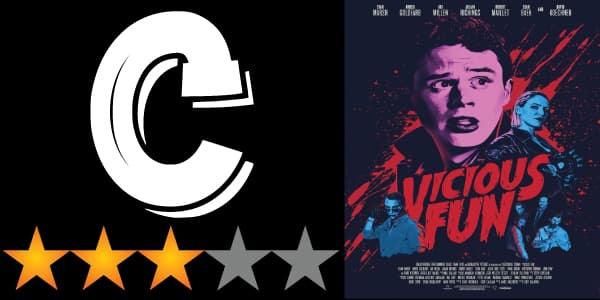 Vicious Fun does not have a release date yet in the US, but it will be playing at numerous film festivals in the weeks to come. I will update this page once the release date has been set.

This is a popcorn horror movie through and through that was made for the fans and delivers on all of the comedy Gore thrills and scares that you could ever ask for.

Thank you so much, everyone, for reading the review of Vicious Fun. I will see you soon.

Check out the trailer of the new Horror Comedy film, Vicious Fun.