Vanquish Movie 2021 is an American action crime thriller film. The film is an hour and 36 minutes.

A woman, Victoria has a complicated past. She is trying to put her dark life as a Russian drug courier behind her but she can’t escape the clutches of retired cop Damon who forces Victoria into doing his bidding by keeping hold on his daughter’s hostage.

You won’t want to miss out on all the action in this film as Victoria tries to escape Damon’s clutches while trying to keep her daughter safe.

It’s no secret that most of the best actors of all time have been in some really bad movies, but it doesn’t mean that they don’t care about their craft.

This movie is talking about a mother named Victoria who was played by Ruby Rose. She is a person that used to be a Russian drug courier.  So she has a certain set of skills. She’s very feared by a lot of people, but she’s been hiding.

Now she has a daughter and she’s been living with this guy named Damian, who, of course, is played by Morgan Freeman, who is actually a detective or a cop who used to work on the force. He was a police chief and stuff like that. He got her. So now he’s on disability. He’s retired.

Basically, she wants to kind of disappear with her daughter and be on her own. And she’s kind of just tired of everything.

And, of course, Morgan Freeman’s character, who is a corrupt and very vicious individual, has basically kidnaped her daughter and forced her to go and basically pick up five couriers or five packages. I guess you could say.

And in the process, we also have a bunch of corrupt cops who are trying to find a wiretap to keep themselves from getting in trouble.

And it basically involves her picking up these packages, taking down a bunch of people, as well as this other story that doesn’t even really have any purpose to the entire movie, to be fairly honest.

And so it’s basically an hour and twenty-nine minutes of Ruby Rose picking up packages of money and stuff like that.

And so when it comes to a movie like this, it doesn’t have a lot of buzz for the simple fact there’s a trailer. There’s not really much, you know, the marketing behind it. It’s kind of released like a theater a couple of days before it releases digitally.

But because it has George Gallo as the writer-director of the movie, I was really interested, intrigued by him doing an action movie.

He’s known for doing stuff of course like Bad Boys. And of course, one of my favorite action comedies The Midnight Run with Robert De Niro and Charles Grodin.

And so it’s a movie that I was really intrigued by, because if he can do and write those types of movies, maybe he can do something fun.

And the kind of atomic blond or John Wick or, you know, of course, in the movie, nobody is like that and see what he can do with it.

On top of that, he’s worked with Morgan Freeman before and the comeback trail, which I thought was a pretty interesting movie.

And so I was pretty, pretty interested in this movie, you know, thanks to the people at Lionsgate for allowing me to see this early.

I’ll say this right now, as a reviewer, it’s sometimes hard to really bash a movie. And you see where I’m going to go with this, because, you know, people put a lot of blood, sweat, and tears into these movies. You know, there are very hard to make. You know, sometimes they, you know, are successful, like the Marvel movies. Sometimes they’re not successful. Like Slenderman is like that.

But, you know, people really try to make decent, halfway good movies. And when one is put out, it’s entirely unsuccessful. You hate being a reviewer because you love the people involved.  And so it’s the unfortunate nature of, you know, having to be truthful and honest when it comes to a review.

This movie from aesthetic of camerawork, esthetic of lighting, esthetic of editing, basically the below the line work, as is called completely to impose upon itself, because it is so bad.

This is college-level, amateurish type material that is being presented on-screen with people that are very famous, people like Ruby Rose and Morgan Freeman, and George Gallo. To an extent, I am so baffled after watching this movie on what exactly happened.

But to present this schlocky crap that was presented on screen is an injustice to everyone who was involved. You know, I hate to say it, but it’s just a bad movie. It really is.

It has no redeeming values. Nobody’s interested in this movie. I believe Morgan Freeman looks like he’s the most bored I’ve ever seen him. In any movie, I’ve ever seen him in. And he’s pretty bored in a lot of movies. He’s in the recently. But he does these films because he probably likes working with the director and whatnot.

But is a movie that is just weird. It’s strange. It’s so one. No, in every performance that shows on the screen, it’s you know.

But it’s something that happened here, something like terribly wrong. I don’t know if George Gallo when he was watching the editing of this film, was like  “oh, I think we messed up” or he just doesn’t care enough that he’s released a terribly, awfully put-together movie.

You know, going through film school and college. I’ve gone back and watched some of the films that we worked on, which had some decent, you know, people involved.

Sometimes you just get like these weird angled shots that are like looking up and like trying to do Michael Bay’s type stuff, which I think was what George Gallo was trying to do.

He was trying to do like a Michael Bay-type movie, but it feels like he was one of those directors that have given his first project, and he’s never going to get above all the seed-level material.

That’s how bad this movie is. It’s just I was it’s so ugly to look at and so awful to watch that you’re just completely revolted by what you’re watching. You almost want to go like Dharawal because it’s so bad.

But this is a movie that’s full of have nots. There’s no haves in this movie. It just has not there’s nothing there. This movie is blank slates, completely empty and you get what you deserve. 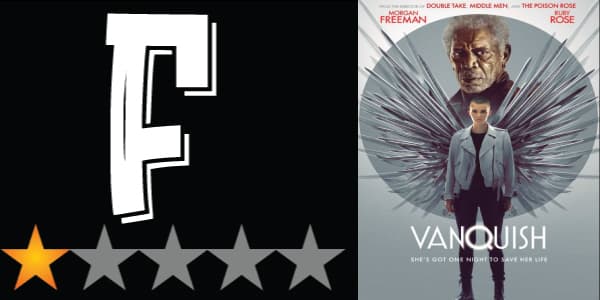 Guys, thank you so much for reading the review of Vanquish movie 2021. See you next time.

Top 10 Banned Movies Ever Made