Trollhunters: Rise of the Titans is colorful action animation that airs exclusively on Netflix on July 21st, 2021. The movie is an hour and 46 minutes.

Trollhunters: Rise of the Titans Review

I had the opportunity to watch a Press screener of this new DreamWorks movie. And even though I’ve never seen any of the other films in this series, I was intrigued by the movie poster and the name. And so I wanted to check it out, and I’m so glad I did.

Plus, I was curious to see what Academy Award winner Guillermo del Toro would do with an animation based on his imaginative book.

For more than 10 years, team Trollhunters has worked to push the boundaries of 3D, CGI animation for television across three distinct yet interwoven and award-winning series and endeavor that knows no precedent in animation.

So with Trollhunters: Rise of the Titans 2021 we’ve sought to break new ground yet again by combining the casts of all three series to give the tails of arcadia trilogy and epic and fitting and as a feature film as an introduction of this expansive mythology to a brand new audience.

And that’s absolutely what happened with me. I didn’t even know that this existed, and now it makes me want to go back and watch what I missed.

Hundreds of artists and technicians worked for years all around the globe to deliver a finale that we are immensely proud of and eager for you to experience. So that’s so awesome.

Here’s the story synopsis, Arcadia may look like an ordinary town, but it lies at the center of magical and mystical lines that make it a Nexus.

For many battles among otherworldly creatures, including trolls, aliens, and Wizards. Now the heroes from the hit series Trollhunters three below and Wizards team up in their most epic adventure yet where they must fight the arcane order for control over the magic that binds them all.

So obviously, this is a fantasy, and it definitely feels fantastical. So there were a lot of things that I really liked about this.

First of all, the voice cast is really great, and it includes names like Emile Hirsch, Lexi Medrano, Charlie Saxton, Steven Yeun, Nick Offerman and the list goes on and on, and they did a fantastic job.

The animation itself is gorgeous. The movie is simply beautiful to look at with rich details. And this movie, to me, kind of looked like a tone-down PG version of some of those video games for children.

In that, the World of Warcraft fantasy world has kind of almost a fluoride recent blue and green and purple and just a certain look to it not the scary part of it, but they’re really pretty parts of it. And I felt like this movie incorporated some of that animation design.

The movie itself is extremely stylish and smart. It feels fresh, and it makes you want to watch this movie over again as well as all of the other ones that you missed.

There’s a lot of visual and spoken human, lots of action sequences to keep everybody interested. And the design of the Titans, I thought was really great. They’re Super creative and terrifying all at the same time, and yet beautiful in their own ways.

The dialogue is very sophisticated. so that young children won’t understand a lot of the vocabulary and a lot of the plot where people are making decisions to do certain things that might just be confusing.

However, visually, there’s plenty to enjoy, and so even young kids can enjoy it while their parents are appreciating it at a different level.

Each of the characters seems to be very fleshed out, and indeed they are because this is 10 years of character and world-building in the makingز

And you can learn lessons from each of these characters as well. Some plotlines occur in the story that I didn’t quite expect, and I love that I hate it when I watch a movie, and I know exactly what’s already going to happen in the end. Right?

Not so with this story, I had no idea where it was going to go. Far because I didn’t know the characters. I didn’t know what powers different characters had, who could do what I didn’t really know the possibilities within this world.

And what’s nice is the characters don’t either. They do to some extent, but they’re still learning about this world. And so I felt like I enjoyed exploring it with them rather than feeling like I was being completely left out.

But along those lines, there were some things I didn’t like. The first one is that I did feel a little bit left out, and I knew that I was missing a lot of backstories.

I knew that I wasn’t fully appreciating the movie because I didn’t fully understand or really know those characters. And so I’m really glad that I know at least some of them now.

There are some cliches in the characters as well as in this story. And while Guillermo del Toro is extremely inventive, he also has a reputation for borrowing ideas from other films. And you can absolutely see other work that has influenced the writing and the telling of this story.

That the vocabulary of the film is very advanced for young kids. There’s also a bit of science and technology in the story. And despite many explanations by characters, some kids still won’t quite understand what’s going on. Some adults won’t either, but I love that they celebrate the science and the physics the characters do. And so I love that that teaches kids to pay attention.

There’s a lot of humor that will go over the heads of young kids because it’s very sophisticated and complicated.

There are some elements from other movies, such as The Lord of the Rings, King Arthur, The Legend of the Sword Excaliber that young kids won’t recognize or are being borrowed.

So there are some themes that are introduced in the movie and done well, such as family, friendship, hope, loyalty, believing in yourself, believing in others, teamwork time, and having courage.  So overall, I thought the animation, the story, the characters were just done

So I am going to give  Trollhunters: Rise of the Titans a B. 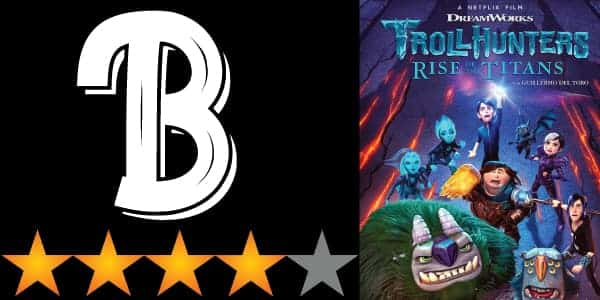 And so I think this could possibly be one of the feature film animations that gets nominated for an Academy Award or Golden Globe or certainly Critics Choice or People’s Choice Awards because it’s that good. And it obviously has a very strong fan base.

Guys thank you so much as always for reading the review of this movie. See you next time.

Trollhunters: Rise of the Titans Trailer

Check out the trailer of the new action, adventure, animation movie “Trollhunters: Rise of the Titans”.