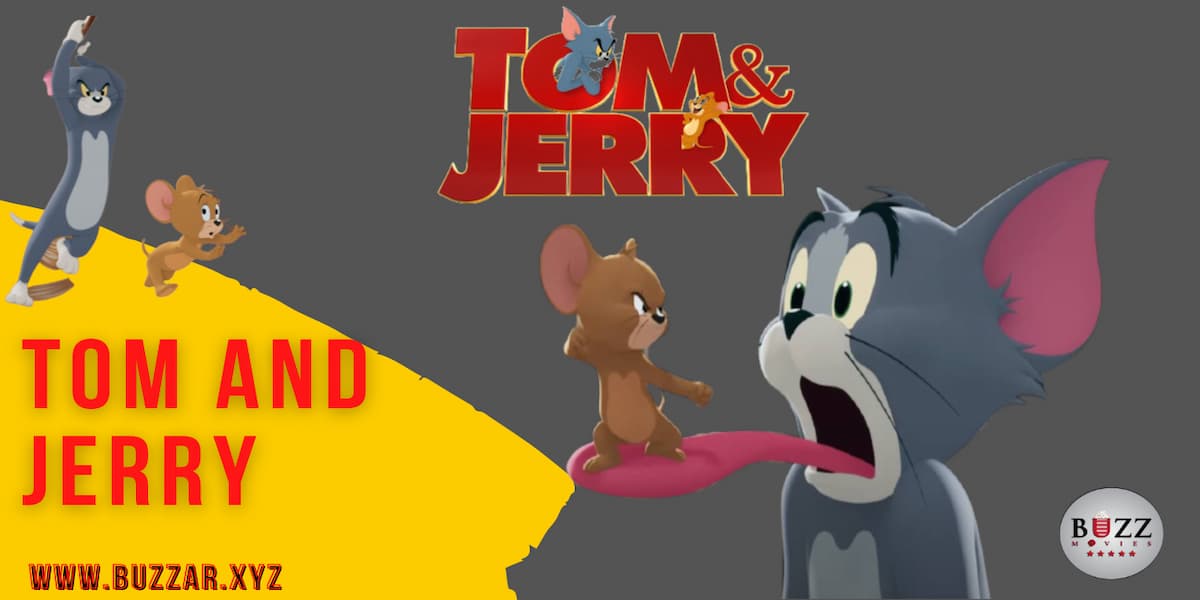 Tom and Jerry Movie is a 2021 American live-action/computer-animated slapstick comedy film. The film is one hour and  41 minutes.

Tom and Jerry it’s directed by Tim story the man behind the barbershop, taxi, the first 2 Fantastic 4 films most recently shaft.

This film finds Tom the cat and Jerry the mouse running into each other in New York City eventually meeting Chloe Grace Moretz, who’s trying to work at a fancy hotel hoping that a wedding between 2 insanely rich people goes well, and it kind of sucks for her that a cat and mouse keep getting in the way.

Tom and Jerry follow the formula of just about every one of the older cartoons that have been adapted to a film. It takes place in New York City. It has a lot of human characters we don’t give a hang about and really terrible slapstick that isn’t funny.

Recycle jokes for 1000000000 other movies involving poop and farts. All we really came to see is Tom and Jerry and they’re barely in the movie because Tom and Jerry are 2 animals that don’t speak that run around for 5 minutes or so and hit each other with heavy objects.

The old cartoon is fun. I used to watch it a lot as a kid. It was the kind of thing that would be on when I’d be eating breakfast.

It’s not like I cared about the plot of Tom and Jerry was just entertaining, it wasn’t like I was excited every single week to find out what happens next time on Tom and Jerry.

It was just Tom and Jerry and they ran around and hit each other with things. Supposed to make a whole movie out of it and a 100-minute movie at that you can really feel them straining to come up with ideas as the film plays out.

These birds routinely appear throughout the movie to break the fourth wall and remind us of what is going on in the plot.

I’m not exaggerating. There are scenes with the birds where they stare at us and give us a recap of what has recently happened just in case we forgot.

When we meet Kayla played by Chloe Grace Moretz she’s on the best quality face time call ever quitting her job so she walks into this very fancy hotel finds a woman there that’s applying for a job.

This woman is very excited about this job it means a lot to her and Kayla convinces her to not even applied. she lies and manipulates her to the point where she scares her and this woman just leaves without applying for the job.

Then Kayla steals this woman’s resume and applied for the job and gets it. And for some reason, I guess this was the film’s way of making me like that character. Well, it didn’t work.

Now obviously the film is trying to set up an arc for her where she starts out a terrible person along the way Tom and Jerry and their cat and mouse-like antics will make her realize that she should have been a better person and hopefully admit her faults.

But to have that be the introduction to what is essentially the protagonist of your movie. It was strange because this is a film for kids and this film is saying that to get to the top you have to lie and cheat and steal and step over someone else’s hard work to get a job you want.

Yep, it’s definitely a big Hollywood movie. They love that shit which brings me to the main thing I couldn’t help but think about throughout the whole movie.

This is a film where people got paid. There’s nothing in the movie that reminded me of the cartoon, except for the fact that Tom and Jerry are in it and occasionally they hit each other with things.

This is a movie about a socialite wedding with 2 super-rich people who want elephants and Tigers and drones DJ I drones specifically because we get a lot of product placement with those drones.

They want all that shit at their wedding and they’re having marital problems that Chloe grace Moretz can maybe help her with because she lost the ring and he’s kind of clueless, and Michael Pena who runs parts of the hotel is annoyed that this woman has gotten this job and he doesn’t think she’s qualified and all of that is happening for the majority of the movie.

Occasionally Tom and Jerry appear for the most part though it’s everyone else. But maybe the company could save it. Maybe could be funny Michael Pena is really hilarious.

This movie has a lot of people in it that are good with comedy. Unfortunately, they went for embarrassing awkward cringe humor.

Like people just talking talking talking a scene until they realize they’re being embarrassing but they’re not saying anything funny while everyone stares at them and then they go sorry and walk away from that kind of humor.

Constantly over and over again people do very embarrassing things in public in front of crowds you know like fish that’s animated has a little thought bubble and then the thought bubble as the poop emoji.

That’s the level right here guys and I understand that it’s a Tom and Jerry movie. I do not go into this movie expecting highbrow entertainment.

I just would love if movies like this respected children. If they seem to even remotely care about children and not pandering to them and not treating children like they are idiots.

This is a movie that parents can turn on to make their infants not do anything for 90 minutes well 100 minutes, but your kids are going to retain anything from this.

If anything they’re going to learn to lie cheat and steal to get to the top which isn’t exactly what you want your kids to do I’m sure.

It’s actually kind of shocking how much of the film is about people in this plot about a wedding with two super-rich people at a hotel that we genuinely don’t care about.

Because they’re actually being faithful in that Tom and Jerry do not speak and so to make a feature film out of this P they obviously had to populated with people and get a lot of actors who made some money.

It is about these films where the studio just things well we have this IP, this old cartoon let’s just throw me in New York City, let’s just have a go-to the Big Apple, we’ll have some antics with some people and it plays like a series of awkward embarrassing cringe humor sketches from SNL and they even hired an SNL actor this time so that’s cool.

Like I didn’t expect anything going into this movie. I was just going to watch it and review it. I am honestly really shocked though that these films that just don’t really care about kids. Just keep getting made.

There’s nothing in the film that a kid can watch and think oh that was special or that man so it’s just a thing that can be on while they’re sitting there eating their Alphabet soup.

The best thing I can say about the movie is that they released it got made. It’s a real movie that’s out. And I guess it probably employed people. Which is really cool people may money to pay the bills.

I’m gonna get Tom and Jerry an F.

It’s basically like the Smurfs and yogi bear and you know it’s right in there guys. It’s like all that. I don’t know why they can’t make a good one yeah they’re just they’re struggling.

Thank you guys so much as always for reading  Tom and Jerry’s Movie Review. See you next time with another Movie.