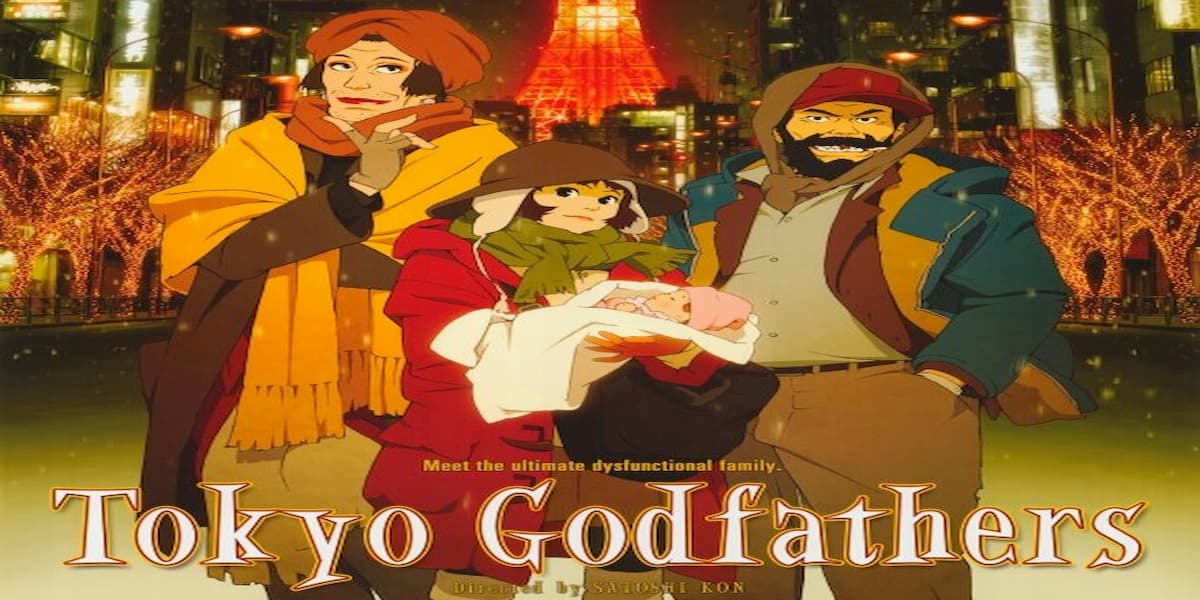 Merry Christmas! Happy Holidays! Seasons Greetings! all of that. If you don’t celebrate, I hope you’re having a good time off from work or school.

I’m excited to talk about a film called Tokyo Godfathers today. This was directed by the late Satoshi Kon a master.

Honestly when it comes to anime Satoshi Kon was my favorite filmmaker. Perfect Blue, Millennium Actress, Tokyo Godfathers, The Show Paranoia Agent, and Pap Rica showed a versatility unseen in most filmmakers.

He had a knack for Hitchcockian suspense, drama, comedy. This is a Christmas movie for god sakes and paprika is a cerebral science fiction film about dream technology.

The guy knew no bounds when it came to filmmaking. His loss is a true tragedy to people who love art everywhere. But I want to talk about happy things.

Tokyo Godfathers is a beautiful beautiful film. This comes about 3 homeless people Gin, Hana, and Miyuki.

One night during the Christmas season while dumpster diving, they find a baby thrown out in the trash. With just a handful of clues, pointing them to this baby’s parents they set off on an adventure to find them.

Christmas themed anime is rare and Tokyo godfathers is probably my favorite. There’s not that many and this is easily the best of the bunch for me.

This film is not just heart warming. It’s very realistic the film. It doesn’t pull any punches when it comes to the depiction of 3 homeless people who are trying to do something that’s pretty much impossible.

Each of these characters are fleshed out. Considerably Gin is a former bicyclist who fell into alcoholism and gambling.

Hana is a trans woman who dreams of being a mother, and sees this baby as a blessing and so for her it’s really difficult that they’re on a journey to find the baby’s parents because this is what she’s always wanted.

And the fact that she found this baby on Christmas seems like it was destined. But she also knows that she has a responsibility to get this baby to its real parents unless of course her real parents really did just dump her in the trash.

Which provides some really great arguments amongst the 3 of them throughout out the film. Because they all have different viewpoints about what should happen to this child. Even though they all have the same goal.

Miyuki is a younger girl who’s run away from home after a violent altercation with her father. So none of them are related.

And they don’t really have that much in common, except for the fact that they’re homeless.

Something over the course of all of their lives has led them to get away from society, and for this reason they have a family unit. It’s a dysfunctional family. It’s certainly not a traditional family, but it’s the family that’s going to save this baby’s life on Christmas.

The film also deals with coincidences a lot. For instance, they find a very large man trapped underneath his car. Because he forgot to put the parking brake on and he’s trying to keep this car from crushing him.

After helping him out of the situation, it turns out that he’s a your cruise a boss which leads them to an extravagant party where they can eat a ton of food get access to things that are extremely necessary for this baby to survive as well as get in the middle of a hostage situation.

Which would have happened had they not run into a crime boss. This leads Miyuki to a house with a baby can be breast fed. This is early in the film I’m not gonna get into any spoilers for those who have not seen Tokyo Godfathers.

But the film continues  with series of events that feel coincidental. That feel sort of like movie logic and then I would say well that’s not gonna happen in real life. If the entire film wasn’t about Christmas miracles.

You can tell that Satoshi Kon perhaps wanted to make a film about coincidences and chose a Christmas themed narrative to strengthen there.

Because that’s one of the few things in films, where you can kind of feel like “all right there doing a Christmas miracle things deal with that it’s heartwarming and it makes you feel good just let it happen”.

The film is also really funny. These three characters have excellent banter with one another and they’re extremely likeable. And again I must reiterate that they’re all so fleshed out.

It’s easy to understand why they’re in this position and it’s easy to comprehend why they all fled their former lives. As a similar with also satoshi kon work the film is animated gorgeously.

The characters are so expressive an instantly recognizable as part of the satoshi kon’s filmography.

I also love it is a few moments in the film, where it seems like a Christmas miracle is taking place.

Someone shows up wearing angel costume and they appear to be glowing but later you realize that’s not exactly the case.

So there’s moments in the film that play with your perception of a Christmas miracle or if someone nice is just helping someone out.

The film also doesn’t back pedal from showing what is a daily occurrence for many homeless people.

When a group of kids beat get up and even drag the body of a dead a homeless man out of a tent which is actually really disturbing.

And where other films might show those kids in hand cuffs later, because they’re being reprimanded for what they did. This film does not give those characters any repercussions. Because that’s an everyday occurrence for many homeless people.

Satoshi Kon was in every way, ahead of his time. It is a true tragedy that he died as early as he did and I often just dream about what else he could have made.

But Tokyo Godfathers stands as an excellent anime film and a really fun Christmas movie. If you’ve never seen it I would recommend it highly.

I’m going to give Tokyo Godfathers an A. Guys thank you so much as always for reading my reviews. I hope you guys have a really great holiday. If you missed my review for jingle all the way a considerably different Christmas movie that one ‘s on my website right now and I hope you check it out.

Guys thank you again for being here. Have a great rest of your year. See you next time.

Trollhunters: Rise of the Titans 2021 Review