Megan Fox, Callan Mulvey, Eoin Macken, Aml Ameen, and Jack Roth stars in the new American horror-thriller film “Till Death 2021.”. The movie comes out on-demand and in theaters on Jul 2nd, 2021. You can watch the trailer and check the review of this horror movie.

Till Death 2021 is an American horror thriller action film directed by S.K. Dale in his directorial debut, from a screenplay by Jason Carvey. It stars Megan Fox, Callan Mulvey, Eoin Macken, Aml Ameen, and Jack Roth.

So Screen Media presents a very bloody horror movie about a woman who is left handcuffed to her dead husband as part of a sick revenge plot. Unable to unshackle, she has to survive as two killers arrive to finish her off.

Emma is played by Megan Fox, and she’s stuck in this stale marriage to Mark, a wealthy man who got himself into some financial troubles and is surprised when he whisks her away to their secluded Lakehouse for a romantic evening on their 10th anniversary.

But everything soon changes and Emma finds herself trapped and isolated in the dead of winter, the target of a plan that gets more sinister at every turn.

let’s talk about the things that I liked. First of all, I had heard that Megan Fox was blackballed from Hollywood because she was very difficult to work with, but she’s still been pumping out a lot of movies recently.

In this movie, her character is intentionally very robotic in Act one. So I was happy to finally see some emotion out of her moving forward.

There are some jumps and scares that will make you laugh because they’re just expected and yet not expected at the same time.

The things that I didn’t like about this movie. You spend the majority of the movie looking at a gory dead man being dragged around by a bloody Megan Fox.

Most people would immediately wipe off the blood splatters that they got on them. Right. Well, she spends a lot of Act one before she wipes all the stuff off of her face.

But she’s still wearing bloody clothes. She can’t change her clothes because, you know, how do you take clothes off when you’re handcuffed to somebody anyway. So that’s just kind of gross.

The timeline might be a little bit confusing at the beginning for some viewers. And is it me, or do the two leading men kind of look a lot alike?

Actually, even some of the bad guys look like the leading guys, too. There wasn’t a whole lot of diversity in this.

One thing that’s very similar to all the characters, and it drives me nuts about horror movies is why are people so dumb in horror movies?

There are a lot of plot holes, and it’s really, really hard to relate to the main character because she’s ridiculously rich, beautiful, and an adulteress. So you kind of don’t feel sorry for her.

I mean, you do, because nobody should have to go through what she goes through. But then you also kind of feel like there aren’t any good people in this movie, nobody that has integrity at all.

This is a Super bloody movie. A couple starts to go at it on a bed, but they’re clothes, so you don’t see anything. You do, however, see lots of cleavage and skimpy clothes, mostly on Megan Fox. There is profanity and a lot of F-bombs and, of course, lots of violence.

The themes that are illustrated in the movie are control and power, revenge, marriage, loyalty and infidelity, greed, tenacity, and the will to live. 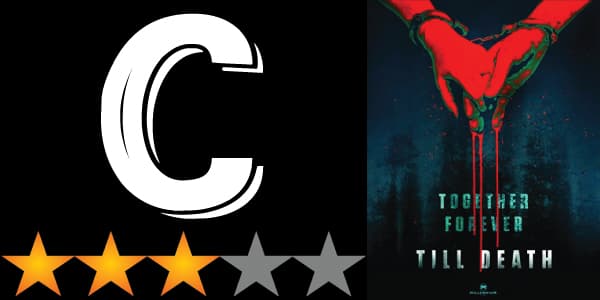 Till Death will be available in theaters and on video on demand on July 2nd, 2021. So if you got the chance to watch it, comment below with your opinion about this movie.

Guys thank you so much as always for reading the review of the new horror movie Till Death 2021. See you next time.

Check out the trailer of the new American horror thriller action film “Till Death 2021”.