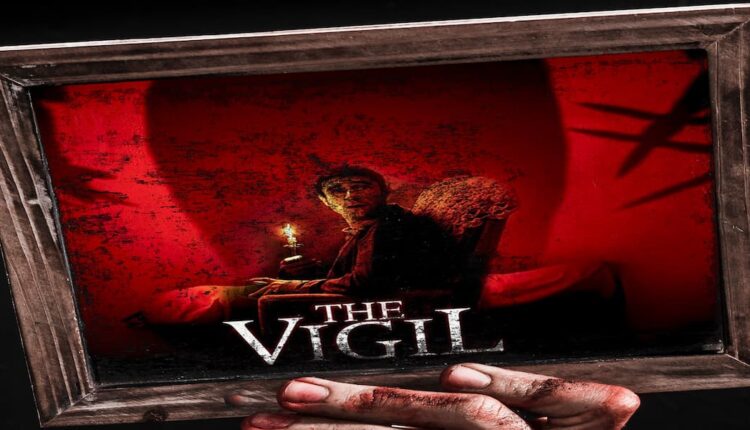 The Vigil 2021 is a really good horror film made on a tight budget with almost one location only, and it never drags. They find really exciting ways to use this location to their advantage.

The Vigil 2021 Movie Cast and Crew

The vigil was written and directed by Keith Thomas and is about a young man who is assigned the task of watching over a recently deceased person overnight in their home.

As an opening text informs us, this is a common practice in the Orthodox Jewish community. When a loved one passes away, someone close to that person may sit with the body, but when a close loved one is not available, sometimes someone will be paid to perform the services.

And our lead character, played by Dave Davis, is a sign of that difficult task. And as you can imagine, sitting in a house all night long with a dead body is ripe for horror.

I’m a little late to the party on this one. I’ve heard a lot of people talking about the vigil over the past few months and it showed at a few places and some critics were buzzing about it.

But mostly it’s actually been filmmakers who’ve been excited about this movie. And I can completely understand why.

This is a really damn good horror film made on a tight budget with almost one location only and it never drags. They find really exciting ways to use this location to their advantage.

Keith Thomas and his cinematographer Zack Cooper Stien, light the house on a very thrilling way. They use shadows to their advantage. You often don’t know what’s going to appear out of them.

And this is a major challenge for indie filmmakers, especially in the horror realm. It’s a lot easier to get a film financed when you can tell your financiers or the studio or whoever it is that you’re working with.

The film takes place in one spot with only a few cast members. That’s a very reasonable approach to making a horror film and making it on a budget.

And oftentimes you can feel a script pulling and pulling until it breaks apart because they don’t know where to put these people anymore, because they’ve gone in every room and they’ve explored every area of the house. And where do we go from here?

The vigil only rarely encounters that kind of strain because the director and lead star Dave Davis do such a good job of setting up a compelling character that you really care about.

It makes for a great character, for a horror film, especially for this plot, because what he’s been assigned to do is technically a religious practice, something that he might have done a little more easily in the past.

But since he’s been feeling doubt and having complications with his faith, it’s not just about a dead body in a house. There’s a lot of deep themes to the film.

And through careful flashbacks at just the right times, you can understand why he’s having a slight crisis of faith and how he might have to overcome that over the course of the night to survive once things get really scary.

There’s also a terrifying older woman in the house played masterfully by Lynne Cohen, who is a really creepy in the movie. She plays the wife of the deceased who is not exactly in the right state to watch over a dead body. And that’s why we have our lead character there.

She often appears to scare the shit out of us throughout the course of the movie, but also at times be a bit of an expository mouthpiece for things that we’re supposed to know.

The film also has a really great way of sidestepping we have to keep them in a house thing that often happens in lower-budget horror.

And then when our hero tries to leave the house, it feels as if this entity that wants to keep him there has overcome his body with a debilitating feeling that every bone is breaking.

It’s a very clever way to not let him get too far away from the House and keep the budget tight. And I’m talking a lot about that.

But I think that’s one of the reasons why so many filmmakers were excited when they saw this movie, because they saw somebody who understood the constraints that he was under and delivered a compelling story and a compelling film that was still really exciting and thrilling regardless.

That’s what I think so many indie filmmakers are searching for. They’re looking for that story that they can get financed that hopefully has something to offer that feels deeper, that feels richer than your average horror movie about a dead body and a person.

There are very few movies that actually work with this type of setup. Another one could be the Autopsy Of Jane Doe’s film.

But there are tons of movies about a dead body in a building and somebody who has to watch over it or somebody who works in a morgue late at night and they’re stuck at the morgue for the whole movie. Very rarely do they work this well.

And, of course, there’s something to be said about the fact that in regards to religion and horror movies, Catholicism pretty much reigns supreme.

It’s very unique and refreshing to see a perspective of an Orthodox Jewish ritual that lends to a horror story.

Like I already said, there are a few times where the script can sometimes feel like it’s being strained a little bit by the fact that they pretty much have to stay in one house.

And you can tell that they’re doing their best to figure out exactly what to do with this limited location, but with the use of his phone as well and people he’s calling and strange messages he receives, they get. A lot out of that, and I was really impressed with the vigil.

I think when it comes to the independent horror film in a house, this is definitely one of the better examples in recent years.

Guys, thank you so much, as always, for reading the Vigil 2021 New Horror movie review. See you next time.