The new supernatural horror film, The Turning movie 2020, is a  drama,  horror, and mystery film that tells a story of a young governess is hired by a man who has become responsible for his young nephew and niece after their parents’ deaths. A modern take on Henry James’ novella “The Turn of the Screw.”New The Turning Movie 2020 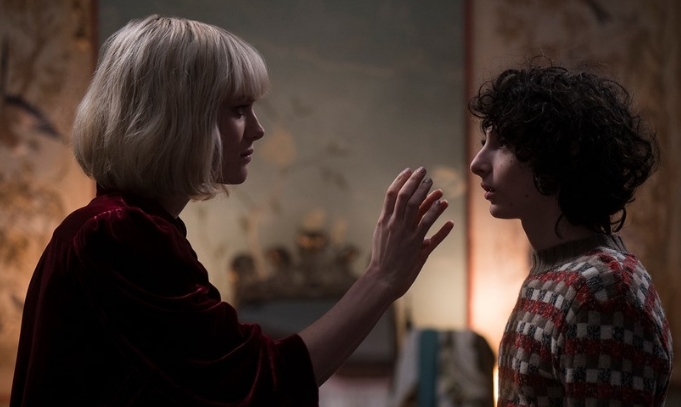 The Turning movie stars Mackenzie Davis, Brooklynn Prince, and Finn Wolfhard is the latest adaptation of the classic novel by Henry James the turn of the screw.

So Mackenzie Davis plays a nanny who gets hired by a very rich family, to watch over to kids the parents are gone and they’re very creepy. They’re very strange and they’re extremely annoying.

But once you start seeing odd reflections in merrors and ghostly shadows in the hallways, she begins to suspect that something more sinister is going on.

This one had a difficult production history starting in 2016 and went through a lot of different hands at one point time Steven Spielberg was an executive producer on this movie.

But he left. As various things happened and having seen the film I can’t blame him. This is a nothing movie. Nothing happens. It has no meaning. It barely has an ending and it leaves you cold wondering why you watched it.

I’d rather watch for the worst movies ever made then and nothing movie. In fact, this film is entirely build up. It feels like one really long first act and then an ending. If you want to call it an ending. I’m gonna have a hard time not spoiling things throughout this review.

But I’m gonna do my best not to, because I am completely baffled by the way this film ends. It doesn’t really have an ending. It’s about 70 minutes of pure setup.

She’s trapped in this house. The kids are getting on her nerves. She’s having really horrific visions and then something occurs and you think the movie’s ending and it felt very unsatisfying.

But I still felt the majority of the movie was rather mediocre at that point. And I was willing to just kind of give it a pass as this mediocre January horror movie. Then the film does the trick of sorts.

The final 10 minutes of this movie are unforgivable. I have not been this upset about the way the film ends since the open house. If you saw the open house on Netflix then you saw one of the worst horror movies I think ever.

It feels like the type of movie that would have lake 37 alternate endings on the Blu ray and like 10 deleted scenes that explain things that they just decided to cut out of the movie.

There’s a semblance of an idea of what is happening and there are about 5 different things you could choose, but none of them are concrete. And I know that a large portion of Henry James original novel is this sort of disorientation that you feel as a reader because certain things aren’t explained.

And in the great film the innocence which you should definitely see which is also based on that novel. There is a similar feeling of a misunderstanding of deception. You’re not always sure if what you’re seeing is real. And it’s awesome.

It seems like the writers behind this movie sort of reading the Wikipedia synopsis of that book and real. Like yeah, we can do something like that, let’s option it, and let’s just make it.

But we’re not going to end it. We’re just gonna like write a bunch of set up. We have no idea we’re going to take that setup, but we like to set up and it’s gonna be arts scene cool when people will appreciate it. I’m sorry, I was mind blown when the credits started.

The movie didn’t end. There’s no ending. It’s crazy actually. The musical score also is very strange when ghosts appear I swear I heard an electric guitar. Such an odd musical choice I commend Nathan bar the composer for trying to do something orthodox and weird.

But it didn’t work. The end credits music was similarly rock-themed. With a bunch of images that look like an anime music video. Look I I swear to god I’m not making this up.

Mackenzie Davis is a bit much in the movie actually. I like her a lot. I thought she was probably the best part of terminator dark fate her Linda Hamilton. But here, she over acts quite a bit. I think.

And Finn Wolfhard unfortunately really bad in the movie and I like him a lot. Brooklyn prince is not too bad actually. She does her role pretty well. The best performance in the movie is by Barbara Martin who plays the housekeeper.

She seems to have this disturbing knowledge of things that happened in this house in the past but she does want to talk about any of it. She gives the best performance in the movie.

She didn’t overact. She didn’t over salads, she was really good. It just feels like there wasn’t a sure hand on the page or behind the camera. It feels like a lot of different people had an idea for what this movie could be.

Nobody agreed and they just threw something together in the editing room and release it for all of us. I’m a give The Turning movie 2020 a D-minus.

First 20 minutes of the movie I was on board. I thought okay this is actually mildly entertaining in the gothic imagery is really beautiful. But halfway through the movie, it was such a regurgitated series of the same sequences over and over again.

One of the kids does something creepy. One of the kids pulls a prank and I was like this is getting really stale. But I was willing to pass it off as an average January horror movie.

By the end of the movie, I was so betrayed by the complete lack of trust in the audience, by the lack of respect for the audience that I have to give it that low grade because they just didn’t wrap it up which is like the kind of the most important part.

Guys thank you so much as always for reading my reviews. I’m gonna review The Gentlemen Movie probably tomorrow or the next day and look forward to seeing that. Thank you guys and See you next time.