A family man is drafted to fight in a future war where the fate of humanity relies on his ability to confront the past.

The trailers for The Tomorrow War did absolutely nothing for me. It looked like a convoluted CGI mess and really I had given up all hope on it being any good.

It also worried me that the director, Chris McKay, was primarily known for his work on the Lego Batman movie and Robot Chicken.

While quite entertaining, doesn’t really prove your cloud to helm such a daunting project like The Tomorrow War. So count me completely shocked when I was blown out of the water by this film.

The film stars Chris Pratt as high school teacher Dan, who’s going about his daily life as normal. When a televised soccer match is interrupted by an Army with a devastating message.

They plead to the people of the present to enlist and help them fight an unimaginable alien threat in the future. If they are not able to get the help that they need, the entire human race will be eradicated.

Dan ends up being drafted to join the war and because of his military experience, is thrust to the head of the pack to lead their Army to victory and to save the human race.

Although the plot is pretty simple, there are many nuances to the storyline that I would not dare spoil here, but the film is really brilliant in how it toys with the past, present, and future, that makes many of the story beats that would normally read as tired, feel unexpected and fresh.

The Tomorrow War also does something that so few modern-day blockbusters do. It gives a significant character development and lets its story breed amongst the action sequences.

Now don’t get me wrong, there are not a whole lot of lows in the two-hour 20-minute runtime, but when the film does slow down, it doesn’t feel forced and the development in those quieter moments are warranted.

Another aspect of this movie that took me by surprise is the strength of its emotional core. I’m not going to divulge which two characters this resonant poignancy comes from as once again that would be going into spoiler territory.

But what I can’t say is this, The Tomorrow Wars themes of the value of family, the bonds of which give us strength and the power to move forward rings honestly and authentically here.

The emotional beats that usually feel out of place in movies, like this those awkward, sentimental moments an Army of the dead come to mind, actually felt like they belonged in this movie, and it was all the better for them.

But of course, you all came here for the spectacle, not the sappy stuff, right? Well, The Tomorrow War is one epic piece of blockbuster filmmaking.

The alien beings are just terrifying and realized enough to make the stakes feel ever so high and forced the tension to hit the ceiling. The action is bombastic, love.

And spectacular, which makes me a little thumb that this film is being released to a streaming platform because it feels like it was meant to be seen on the biggest screen possible.

And while there are moments when the action started reaching mind-numbing levels and the CGI started to feel like it was all blending together, the film would pump on the brakes for a much-needed breather and hit the refresh button.

Pratt proves once again, while he is such an effective leading protagonist. Although his physique is that of a superhero, his prowess comes from being a charming, believable every man that feels at home, yet at the same time, out of his comfort zone in these incredulous circumstances.

At the end of the day, he is an actor who effortlessly creates characters that everyone can relate to and route for. It was also refreshing in this film that he toned down the smarmy sarcastic humor with Dan to give us a much more grounded character.

The rest of the cast is also excellent, the huge standout being Yvonne Strahovski, who effectively balances this air of mystery, deep-rooted anxiety, unwavering fortitude, and heartfelt compassion.

Her commander character could have gone off the rails so quickly, but it is because of Yvonne Strahovski deeply felt performance that what works about The Tomorrow War works so well.

My one gripe about the cast doesn’t have to do with the performances per se, but that Betty Gilpin was cast as the sidelined white character.

Betty Gilpin is one of the biggest badasses working today, and I yearned throughout the entirety of this film to see her in action. Such a disappointment.

The Tomorrow War is certainly not without its flaws. Like I said prior, there are moments in the movie that action seems to go on for too long.

There are only so many bullets that can be shot, aliens to be slaughtered and explosions to go off before the action starts to become wearisome, and the cheese factor in this movie is very high.

There are certainly some scenes that came off as silly and hokey, but I expect that going into any film like this, especially a dumb bun summer popcorn flick.

And Lastly, The Tomorrow War. Although in original concept, is a film that is derivative of so many films that have come before it. But Luckily it spins it all in a way that feels so fresh. And so new. 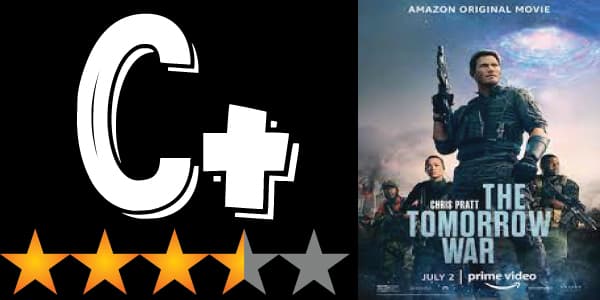 This film exceeded all of my expectations and blew them out of the water. Although it times cheesy and a bit mind-numbing, the Tomorrow War is the refreshing ingenious, and riveting big budgets summer blockbuster we’ve been waiting for.

The Tomorrow War movie is Released on Jul 2, 2021. You can watch it on Amazon Prime now.

Guys thank you so much as always for reading the review of The Tomorrow War 2021 movie. See you next time.

As years have passed, I’ve almost become disenchanted by the modern big-budget blockbuster.

We rarely get anything that’s not a sequel, franchise installment, or remake nowadays, and when we do, I’m usually let down by the barrage of cliches Wheat, character development, and overall laziness of these large studio productions.

And when I saw the trailer for Amazon’s The Tomorrow War, I thought it looked like the epitome of all of these shortcomings.

Check out the trailer of the new  Sci-fi and action movie The Tomorrow War.

In The TOMORROW WAR, the world is stunned when a group of time travelers arrive from the year 2051 to deliver an urgent message: Thirty years in the future mankind is losing a global war against a deadly alien species.

The only hope for survival is for soldiers and civilians from the present to be transported to the future and join the fight.

Among those recruited is high school teacher and family man Dan Forester (Chris Pratt). Determined to save the world for his young daughter, Dan teams up with a brilliant scientist (Yvonne Strahovski) and his estranged father (J.K. Simmons) in a desperate quest to rewrite the fate of the planet.