The Suicide Squad is a 2021 American Action, Adventure, Comedy superhero film. The film is rated R and it is 2 hours and 12 minutes. It is on HBO Max right now.

The film is based on DC Comics featuring the team Suicide Squad. Produced by DC Films, Atlas Entertainment, and The Safran Company, and distributed by Warner Bros. Pictures.

It follows some characters from David Ayer’s first film and brings some new ones back for another mission in which they’ve got a chip installed in their neck, and Amanda Waller played by Viola Davis, could blow up their heads at any moment if they go off course.

I had a lot of fun with this movie. Obviously, that’s what I’m talking about. Don’t plan on talking too much about big movies in the future unless I genuinely love them. And The Suicide Squad is the kind of movie that I wish more comic book films would like.

It’s extremely violent. It doesn’t seem to care too much about, you know, test audiences. There’s a lot of stuff in the movie that I could easily see offending people.

If you look at James Gunn’s previous films, like Slither or super, you know that he existed before Guardians of the Galaxy, and he has sensibilities that are seen all over this movie, a penchant for a reverent, humor, jokes that kind of make you feel bad for laughing.

There’s a great sequence, probably my favorite sequence in the whole movie for Peacemaker played by John Cena and Bloodsport played by Idris Elba are competing in this jungle to see who can pull off the coolest kill.

And I won’t get into spoilers. But when they reveal what was actually going on in this scene. It creates this sort of nervous laughter and then just this uproarious, hilarious burst of insane laughter when you realize what they were really doing.

And it’s a type of joke that takes guts. There’s a lot of jokes in the movie similar to Once Upon A Time in Hollywood, where Tarantino dedicated a lot of time in a film to one joke.

There are two sequences in this movie that you sort of don’t really know where they’re going for a while.

Idris Elba is awesome in the film. I feel like this is finally an opportunity for him to be in a bigger budget film that just plays to all of his strength.

He’s not a side character. He’s kind of the main character in a way, and he’s really strong in the movie.

John Cena is utilized perfectly. Margot Robbie once again is excellent as Harley Quinn, and it’s great to see her in a movie where she is really given a lot of opportunities to shine.

But I think Sylvester Stallone as King Shark stole the whole movie for me. I love that character so much.

James Gunn is very good at introducing animal side characters that really steal the whole movie, and he’s amazing in the film, and I love that character, and I hope to see more of them.

The Suicide Squad gave me everything I wanted from these characters because it was clear that James Gunn tried to use more second-rate characters that maybe aren’t as known and that he could just do a lot of stuff with, like Polka-Dot Man or whatever his name is.

Those are just so many choices in the film that you can clearly tell that somebody who had some clout going in was able to make, which is what I love about this.

I wish that more Studios kind of trusted people in this way and allowed people to make choices that may be seem risky at first.

But if you just kind of trust the people you work with, you might get something great. And I think James Gunn pulled off a really fun movie, and more than likely, you guys are going to see it anyway. But I wanted to tell you that I had a great time with it. 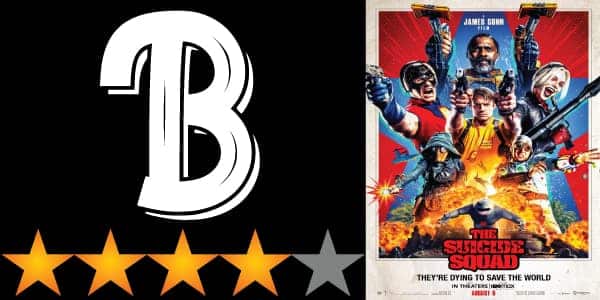 Guys thank you so much, as always, for reading the review of The Suicide Squad movie 2021. See you soon.

Here is the trailer of the new Action, Adventure, Comedy superhero film The Suicide Squad (2021). Check it out.

Supervillains Harley Quinn, Bloodsport, Peacemaker, and a collection of nutty cons at Belle Reve prison join the super-secret, super-shady Task Force X as they are dropped off at the remote, enemy-infused island of Corto Maltese.