The Smartest Kids in the World movie is a documentary film by Tracy Droz Tragos. It is an hour and 45 minutes.
This intriguing documentary aired at the Doc NYC Film Festival and will be available exclusively on Discovery Plus Channel on August 19th, 2021.

The Smartest Kids in the World Movie Review

The Smartest Kids in the World Movie is a special documentary film that is directed Tracy Droz Tragos.

The movie is based on Amanda Ripley’s New York Times Bestseller, THE SMARTEST KIDS IN THE WORLD is the story of four teenagers studying abroad in countries that dramatically outperform the United States in education.

We travel with them as they adjust from their local high schools in Wyoming, Orlando, Maine and the Bronx to high schools in Finland, South Korea, Switzerland, and the Netherlands.

The film does a really great job of giving voice to teenagers who know firsthand what it’s like to be a student in a foreign country from an American perspective.

I think it’s super interesting to hear about their discoveries and insights about how to reform the US education system so that we can do better.

A New York Times bestseller, The Smartest Kid in the World, was published in 15 countries and chosen by The Economist, The New York Times The Washington Post as one of the most notable books of the year when it came out.

The documentary was the movie version of that book and was directed by Tracy Droz Tragos.

I actually think the movie poster is really clever. We often assume that the countries around the world that are excelling in education must be using some secret superhero formula to score so well on exams.

I’ve often wondered what exactly it is that they’re doing that we’re not doing here in the United States. So I was completely fascinated to learn more through the eyes of these American teenagers.

I appreciated the fact that both the book and the film Explorer the quality of education from the eyes and experiences of teenagers rather than just experts and those who are doing research on the subject in an academic manner.

The data about education show one thing that teens who actually gone to school abroad can offer so many more insights.

Traveling and living abroad is extremely educational and eye-opening. Those international experiences can expand your way of thinking more than anything else, really, that I can think of.

I believe that cultural understanding and appreciation is so important to improving foreign relations.

I actually heard that Pepperdine University requires students to do a study abroad before they can graduate. I think that is awesome.

Americans who are able to travel abroad always come home with two things, greater appreciation for both their own country here in the United States and for other countries.

All right. So that explains why I was super enthusiastic about watching this documentary.

I thought it was really good that the film showed the struggles as well as the triumphs that the American students had while studying abroad.

Learning about the South Korean exams was super interesting. It is extremely intense and competitive like it’s represented in the film in South Korea.

It was fascinating to hear the Minister of Education talk and express his desire that the testing tradition in South Korea is more humane. And that is the truth, because like I said, it is intense and competitive and just crazy.

Now, there were some things I didn’t like about the movie or thought could have been handled better.

For example, we saw a lot of blank stares on the faces of these American students once they arrived in a foreign country. So it wasn’t really explained if they had had foreign language traveling before they arrived there. And if so, how did they prepare?

Many of the scenes show the American students speaking English with classmates and teachers. So I couldn’t tell how many of those schools adapted to the Americans versus the Americans adapting to the schools in terms of the language used during the lessons.

There’s one student who does speak French quite well, and you’re like, oh, awesome. And then you see a little clip of another student giving a speech in Korean towards the end of her stay. So that’s awesome.

But the other students, I don’t know that I really could tell if they learned the language before they arrived or were just kind of picking up a little bit as they were going along.

The timeline jumps from when the students first arrived in their new countries to when they come home. So I wanted to know more about the in-between.

We see a little bit, but I wanted to know what were the big secrets that they discovered about how those other countries are doing so well.

There are a few interview moments towards the end, but they were short and I wanted to explore every aspect of the educational system.

There’s a little bit about the social life and some studying, but not much in terms of content and life, work balance and that kind of stuff.

I think it could have been really nice to point out some of the things that the American schools do well and even better than the other schools in the world.

The film mostly talked about how terrible the American education system is, and I think we do a lot of things very well.

However, they weren’t learning the critical thinking skills that our universities here in America expect out of our high school students.

They didn’t know how necessary it to think and analyze and evaluate all of the information that they were studying.

And I think that’s pretty typical for Asia, so I would have loved to have seen more exploration on that as well.

When people spoke in foreign languages in the film, we weren’t always given subtitles to know what was being said.

Otherwise, it was really fun just to get a tiny flavor of the countries I would have loved even more just because I love international travel and study so much.

I think young children will be very bored, but teens might be interested, especially if they have been considering studying abroad. And watching this movie together could be a really great opportunity for parents and their teens to talk about possibly arranging for a study abroad program.

So I am going to give The Smartest Kids in the World movie a B. 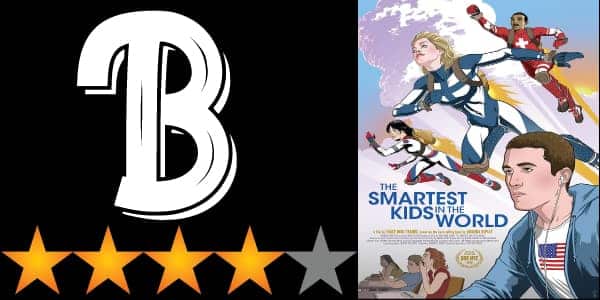 Guys thank you so much as always for reading the review of The Smartest Kids in the World movie. See you next time.