Check out the Review of the new American computer-animated road science fiction comedy film, The Mitchells vs. The Machines by Mike Rianda.

The Mitchells vs. The Machines Review

The Mitchells vs. The Machines Review

A quirky, dysfunctional family’s road trip is upended when they find themselves in the middle of the robot apocalypse and suddenly become humanity’s unlikeliest last hope.

So let’s just say that even though the Mitchells versus the machines has been on my radar, it was so low on my list of movies I was interested in because of the way this film was marketed.

I don’t think Sony knew what to do with this product, especially because at one time they were calling it connected, which is such a bland name for an animated film.

And then finally, they handed it over to Netflix for a pretty penny, of course. But I am so happy they decided to go this route because even though I would have loved to see this in theaters.

I don’t know if it would have had much of a life in the cinema because of its poor marketing campaign. And now the world can watch it from home. And I really hope that they do.

We start off with the movie Learning about the Life of Katie Mitchell, played by Abbi Jacobson from Broad City, who perfectly encapsulates this character.

She has always been an outcast. Yet her love for all things movies has led to an acceptance to film school in L.A., where she believes she will finally fit in and find her tribe.

Her family is also all weird in their own way, but they have failed to really come together and appreciate each other’s quirks.

This is most apparent in Katie’s strained relationship with her father, Rick, who’s outdoorsy. Workman-like nature has never really meshed with her technology-centered sensibilities before.

She leaves them forever to go to college, Rick decides it would be a good idea to have one last road trip together to take Katie to school, much to her dismay.

But along the way, a robot apocalypse threatens the world. And in a unique twist of fate, this ragtag family must save the day.

I immediately related to this film right off the bat because Katie is so similar to me with her love of film and creative mind not really being appreciated by her family.

The struggles and strains of this family’s relationship with each other are so well-written and come off so authentic that you really will be hard-pressed to not find something that you can connect your own life experiences with.

These family members are all brought to life beautifully by the voice cast. Danny McBride has never been so sentimental and lovable as he is here with Rick.

Whilst still injecting his own brand of humor into the role. Maya Rudolph is just perfect as mom Linda and she is really able to let loose and let her freak flag fly as the movie goes on.

The writer-director Mike Rianda plays Katie’s younger brother, Aaron. And although it took a little while for me to get used to his casting, Randy’s choice to play this character ends up really paying off in the comedy department.

We also have the inspired bit of casting in Coleman as the villainous pal. AC3. like a cell phone entity, Coleman is able to pull off being menacing, endearing, and wryly witty all at the same time.

The actress continues to prove she can do anything. But it is Abbi Jacobsonwho carries the film with her fantastic voice performance as our lead heroine. Capturing the essence of an awkward young woman on the precipice of adulthood brilliantly.

The animation is absolutely to die for here. They have found a really distinct style that is most certainly CG but has this feel of traditional 2D animation as well.

With all of these really cool doodles sprinkled throughout the movie, like in into the Spider versus Sony has tried something completely different with their animation style here.

Something we have never seen before. And once again, it pays off in spades. This is also one of the funniest animated movies I have seen in years.

I was either giggling or laughing out loud throughout the entire movie. And you know why? It’s because the humor in The Mitchells vs. The Machines movie is completely earned and built from the ground up.

As the movie progresses, it becomes funnier and funnier because we are slowly learning the ins and outs of these characters, who they are, and what their quirks are, and that makes them all the more hilarious.

I also must say that the action is so well choreographed and gripping with inspired moments like a Furby attack and a battle in the sky with a twenty-eight Top 40 radio hit that will certainly be getting new life because of that seen.

There is this zany manic energy to the film that really makes you feel like anything is possible and that allows for it to be completely unpredictable.

And then to top it all off, the movie even takes the time to slow down in just the right places to really bring the emotional core of this film home.

That we might all be different. We might not understand each other, but that is what makes us all so special and what can actually bring us together.

If we can appreciate and love each other for our differences, then that is when we can all find our true happiness.

Honestly, the only negative I can even think of is that five to 10 minutes of this movie could have been cut to make it even more lean and propulsive.

But that is such a minor quibble because I really did enjoy every moment The Mitchells vs. The Machines has everything you could ever want in an animated movie.

And you can see in every frame of this film the amount of heart and passion the filmmakers have for this story. And for these characters.

Though we are blessed with some amazing talent in animation these days, it’s very rare for a film to come together like this that feels so deeply, truly special.

So I am going to give The Mitchells vs. The Machines movie a B. 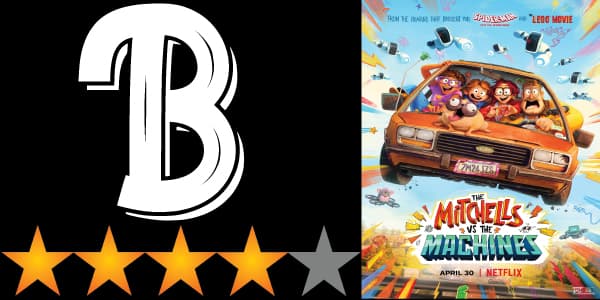 This is one of the biggest surprises of the year and also one of the best films of the year. The stunning animation, captivating storyline with relatable, endearing characters, the laugh-out-loud comedy, the gripping action set pieces, the brilliant voice work, and the emotional beats hit harder than you ever could have expected.

The Mitchells vs. The Machines film is now streaming on Netflix.

Guys thank you so much for reading the review of The Mitchells vs. The Machines. See you next time.

The Mitchells vs. The Machines Trailer

Check out the trailer of the New Comedy Animation Film, The Mitchells vs. The Machines.