The Misfits 2021 is an American action, adventure, and thriller film directed by Renny Harlin.

Do not be confused with the 1961 cowboy-themed film of the same name with Clark Gable and Marilyn Monroe. The movie is rated R. It’s an hour and thirty-four minutes and I’m going to give you my movie review grade at the end of the review.

So in a quick nutshell, if you combine the Robin Hood story with modern-day action, you get this film. While it’s an entertaining summer flick, it’s not very good. But if you’re looking for something that’s just goofy and nonsensical fun, there you go.

All right. So things that I really liked about this movie, first of all, Pierce Brosnan always provides British elegance to every movie that he’s in.

There’s a lot of really cheeky humor in the film. In fact, Pierce Brosnan as the character states doesn’t get cheeky with me.

And what I really liked about this movie is it’s very self-aware and it pokes fun at itself many times. So I appreciated that.

Sometimes movies that are really bad that think that they’re really good just make it even worse. But this movie, because it recognizes its own flaws, makes it a little bit more palatable,I guess you could say.

Fun fact, the desert scene was actually shot in a real sandstorm. So we get to travel to Abu Dhabi, among other places, during the movie.

The musical score is energetic and quirky and the movie itself is stylish and feels sophisticated. There’s a lot of humor, both spoken and visual.

And if you enjoy the movie, you’ll be happy to know that the ending gives us a hint that they’d like to make a sequel with these characters.

So there were some things that I didn’t like or thought could have been handled better. First of all, the first 20 minutes are all exposition, which is way too much time to set up the story.

It made me laugh when Pierce Brosnan’s character even mentions that fact by saying you’ve been explaining for an ungodly amount of time.

But then the exposition really lasts throughout the entire movie and large segments. So that’s a problem.

The plot has holes and is even confusing at times despite all of the explanations. You can tell China had a big influence on this film. And in fact, so many films now coming out of Hollywood are trying to take advantage of the huge Chinese market.

Now, I’ve done business in China for many years and I adore China. And when I’m there, I’m always thrilled to get to see movies that often are released in China before they come here. But anyway, the tone and the pacing of the film are just kind of all over the place.

Sometimes there’s lots of action and lots of goofball humor, and then other times it slows down and tries to get profound. And so just that the pacing is all over the place. That’s what I’m trying to say.

There’s a long scene where a ton of people throw up. I mean, it goes on and on and on. And I’m just like, well, there are some black and white shots when characters and locations are being introduced in the story at the beginning, which is fine.

But then they appear again in Acts two and three for some reason that didn’t really make that much sense. Because I thought that they were using that style to introduce characters. Then at the end, when we already know the characters, I was like, OK, so what’s the point of that? Other than maybe trying to be artsy-fartsy or something? I don’t know. I guess it went over my head.

There are a lot of posing shots to remind us how cool the Misfits 2021movie is, and it just cracked me up every time.

So let me give you some tips for parents, first of all, this is probably not a movie that you’re going to want your kids to see because there is a lot of profanity, including F-bombs, violence with blood, dishonesty, and crime are kind of glamorized, their portrayal of drug use and alcohol. And a storyline that will probably confuse them because there are lots of adults talking and that kind of stuff.

Some themes are crime, loyalty, family, friendship, perseverance, thinking outside the box for sure. And again, the crime is really glamorized. So it’s not a great role model type of movie for kids.

So ultimately the movie is very flawed, but it can provide some entertainment if you’re looking for something that, again, is just sort of wild and crazy and fun and silly. 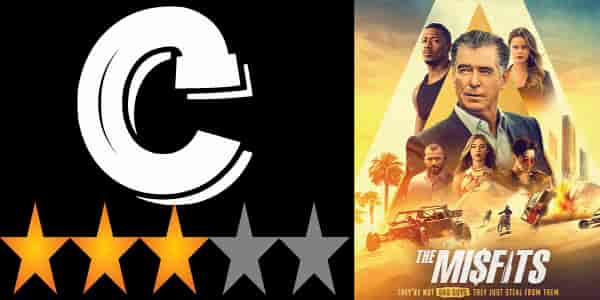 This film was released in South Korea on June 3, 2021, and is scheduled to be in the United States on June 11, 2021. So if you got the chance to watch it share with us your thoughts about the movie in the comments below.

Guys thank you so much as always for reading the review of The Misfits 2021 movie. See you next time.

Check out the trailer of the new action, adventure, and thriller movie The Misfits 2021.