The Macaluso Sisters ( Le sorelle Macaluso) is a 2020 Italian drama film. The movie is rated R, and it’s an hour and 34 minutes long.

This dramatic moving and very hunting film opens exclusively at New York’s Film Form on August 6th, 2021 and in Los Angeles on August 13th, 2021, and in Select theaters nationwide, at least here in the United States throughout August 2021.

The Macaluso Sisters ( Le sorelle Macaluso) is co-written and directed by Emma Dante, based on her own 2014 play of the same name.

The Macaluso Sisters are five orphaned siblings who live in and work from a shabby rooftop apartment in Palermo, a city in Sicily, Italy.

They make a living by renting out, which they paint festive colors for weddings and funerals kind of an interesting way to make a living.

A summer Beach outing is planned on a rare day off from work, and they have a great time near the close of the day, full of enchantment Revere and close encounters with secret lovers, a shocking catastrophe transpires, and that single event forever alters the family dynamic, challenging the delicate balance of sisterhood in this generation-spanning feature film.

So the things that I liked were plenty. First of all, the film premiered in competition at the 2020 Venice International Film Festival in Italy, where on the Passante awards given by the National Union of Italian Journalists for Best Film and Best Actress. Awarded to actually the entire ensemble cast playing the sisters.

There are 12 women who play the sisters at different ages, which is kind of clever and interesting and has since won the Association’s annual prizes for best film and best director. So kudos to the film at the film festival.

The introduction of the movie is intriguing because you hear sounds, but you can’t quite figure out exactly what’s happening and you really don’t learn fully what that’s all about until the very end of the movie, which I always like that when there are these missing pieces that get tied up in the end.

As I mentioned, there are 12 actresses who play the Five Sisters over a span of many years. So look for the little details of things that they do and say to help you determine which sister is which as they age.

There’s no explanation, a title card, or anything like that tells you how much time has passed or which sister we’re looking at. So you really have to pay attention to those clues.

I thought that the theme song was very sweet and melancholy. In fact, all of the sounds are very mesmerizing.

And as I mentioned, there are many scenes where no one’s talking. And so you’re hearing the ocean, the wind, birds, and pay attention to all of that, because it really sets a mood and sends a message.

I thought it was really interesting to watch the various scenes that take place in the family’s bathtub throughout the years.

The film is full of symbolism, making the movie really very rich to better understand and appreciate the movie, and including these notes that are very helpful from the director.

First of all, the main character of the film is the whole of the Five Sisters. That from the very beginning to the end of the film, and life acts as an organism apart with its own rules, bonds, and voice. Okay, so that alone really helps to understand this movie. If nothing else.

Each sister is like a vital organ, indispensable to this entity that combines each peculiarity and harmonizes them by melting them into a compact, vibrating nucleus.

The emotional fibers that bond these five women into a single character are so strong, even though they fall apart, that they never completely go away.

And in fact, not even death can erase the presence of one of the bodies belonging to this nucleus. And it doesn’t even reduce the vital strength of this whole.

All right, we’re getting pretty heavy here. So Here’s the first symbol of Maria. Well, that’s the second symbol, really.

Maria represents the brain of this organism, this body. She’s the very first daughter born. When the story begins, she’s 18 years old and she takes care of her sisters. So for this reason, she can be described as the brain of the organism.

She represents the rational part of the group and is the one who makes decisions. So she’s the voice that everybody listens to for the most part. A voice that calms down, for it gives protection, inspires it knows.

So the next sister is Pinuccia. She represents the skin of this whole body. She’s the second born, and she carries the weight of authority without really being authorized.

And she regulates conflict through conflict, love through love. Like it or not, she’s the one who takes care of the most complicated sister whose name is Lia. And I’ll get to her just a second.

She’s the skin of the family, a thin organ, yet very strong. It’s the first defense and shows the distress of the organism more than the other ones.

Pinuccia often communicates her pain without stepping back. She represents marital and nonmarital relations if you know what I mean. The Yankee Bank part of the movie and the sensual part of the Macaluso Sisters. She’s very dramatic and very sensual and romantic and

So Lia represents the heart of the body. She’s guided by instinct and passion on an age and geographical level. She’s placed at the Center of the organism because she’s in middle age-wise.

Often it’s her input that move. It just like the heart in the human body. The rhythm of her heartbeat articulates the mood of the whole, declares its tiredness or its vitality.

It’s calmness or euphoria. It’s passivity or its aggressiveness. She’s the sister who bonds the group in a stronger way. But at the same time, she distinguishes herself just like a human heart, which is an involuntary muscle.

Now Katia plays the stomach. So when we first meet her, she’s 12 years old and she’s chubby with a sandwich in her hand. And we see her again in her 70s with her own family that’s supporting her.

It’s as if she were the stomach of this nucleus because it looks like she’s been able to digest all of life’s obstacles and assimilate its nutrients.

She ends the cycle that opens the film, a virtuous cycle that leads her to carry on with her life beyond the exclusive nucleus of her sisters.

And then finally, Antonella. She represents the lungs. She’s the baby of the family. Her presence is the breath that gives air to the whole story and never fades away. It represents hope, resistance, the lungs habit of acting spontaneously.

It’s deja vu and order, broken by a loud cough, a gust of wind that immediately gathers itself up yet into a different shape, hardly perceptible.

And then the house itself represents the organ list character. It’s the last character that goes through the story through the years and the generations, all of the changes and the evolutions. It’s physically inanimate, yet very intense, and is a character itself. And you see it.

It’s the house in which the five sisters have always lived. It experiences their ages and their changes, their joy, and their pain.

The house perspective is the star on the sisters, able to perceive any change or metamorphosis, but severely demure and sincere in its persisting silence in the way it denies a judgment.

So I am going to give The Macaluso Sisters a B. 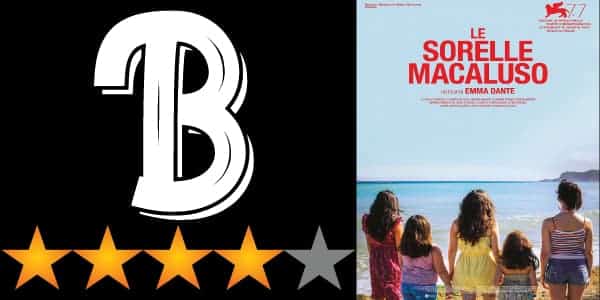 I really enjoyed this movie but it is not for everyone. So if you got the chance to watch this movie comment below with your opinion about it.

Guys thank you so much as always for reading the review of The Macaluso Sisters movie. See you next time.

Check out the trailer of the new drama movie The Macaluso Sisters.