The Last Mercenary 2021 is an action–comedy film by David Charhon. It will be released exclusively on Netflix on July 30, 2021. It’s PG13 and it’s an hour and 50 minutes.

The Last Mercenary 2021 movie is directed by David Charhon and written by Charhon and Ismael Sy Savane. The film stars Jean-Claude Van Damme in the lead role, along with a supporting cast that includes Alban Ivanov, Assa Sylla, and Samir Decazza.

Let’s start with the summary of the story of this movie.

Richard Brumère aka Lab Room, which means the mist in French apparently, he’s a former French Secret Service special agent turned mercenary. He’s back in the saddle as the immunity he was granted 25 years earlier for his son Archibald has been lifted accidentally.

A mob operation threatens Archibald’s life. So to save him, Richard will have to reach out to his old contacts, joined forces with a bunch of reckless youngsters from the projects, and an offbeat bureaucrat, but mostly find the courage to let Archibald know that he’s his father.

So let me point out some of the things that I really liked about it. First of all, I really enjoy actors who can poke fun at themselves while being awesome. And that’s exactly what Jean-Claude Van Damme does in this film.

The muscles from Brussels is back. The coolest shot of Jean-Claude is when he does split up high on the walls, which is classic.

And it reminded me of that GoDaddy commercial a long time ago when he did the same thing while holding maracas. It’s awesome and hilarious. At the same time.

He still got impressive kicking and punching action with a lot of comedic chops, chops all around.

He fights, he dances, he shopped, he still got the move. This is actually the third film that Jean-Claude Van Damme has worked on with a French director. It’s kind of nice to see him working in his own country and in his own language.

The production value is pretty high for this movie. Netflix seemed to have spent some money on the film. So fun fact, scenes were shot in Ukraine as well as in France.

So if you enjoy slapstick comedy, that’s exactly what you get in this film. If you think that that kind of humor is just too goofy, then you’re probably not going to enjoy this because there’s a lot of it in this film.

There are both visual gags and spoken gags. The movie definitely doesn’t take itself too seriously. It’s all meant to be in good fun, and it’s fun to see the ridiculous team that Jean Claude Van Dam gathers to help him with his mission.

There are some original music and some references to other movies, including Scarface. There’s a lot of diversity in the cast and a lot of the 80s action stars seem to be coming back one last time.

But of course, there’s no question that they’ll do another movie if and when the movie makes a bunch of money.

And I don’t know if this is really going to be Van Damme’s last movie. We’ll find out. We’ll see how popular this one is.

So there were some things I didn’t like about the movie.  It’s pretty goofy. The movie with ridiculous action sequences that will make you laugh out loud, but you have to remember that’s intentional.

Some people may be turned off by the fact that the movie is all in French with English subtitles and dubbing. It feels like a foreign flick because it is. And I know some Americans just don’t like that. But I really love that Netflix is trying to introduce us all to more films from around the world.

So I don’t know if he’s talking about the Netflix streaming aspect and that’s new to him. I’m thinking that’s probably what he meant.

Because the movie is PG 13. There is a lot of violence, often with blood. There is some mild profanity in French, a man rides on an electric scooter through the city and only his underwear.

So some positive themes that are illustrated well, our family also absentee parenting, sacrifice for others, teamwork flexibility, and being prepared.

So I am going to give The Last Mercenary 2021 Netflix movie a B. 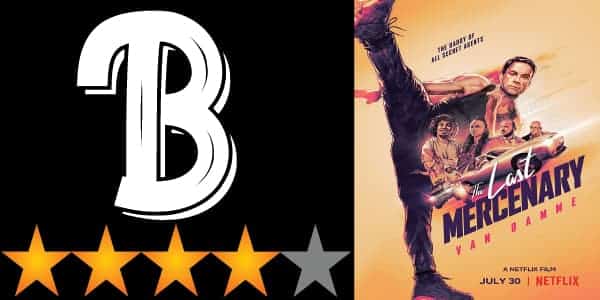 I actually got a kick out of it. At first, I wasn’t sure if it was going to be serious. And then after a few sequences, I was like, Okay, I get it. I’m on the same page. Let’s do this.

Guys thank you so much as always for reading the review of The Last Mercenary 2021 Netflix movie. See you next time.