Today, I’m going to be going over the new organ donor drama thriller The God Committee, with the plot alone involving a group of people coming together to choose a person who deserves to get a new heart. I was 100% on board. Does this film do its storyline Justice, or is it just another forgettable medical drama?

Let’s check that out.

An organ transplant committee has one hour to decide which of three patients deserves a life-saving heart. Seven years later, the committee members struggle with the consequences of that fateful decision.

So the official trailer for The God Committee dropped two weeks ago, and it immediately skyrocketed to the top of my most anticipated films of the year.

The ensemble cast was filled with underutilized but outstanding performers who deserve more meaty roles like the ones that appeared to be in this film.

It also looked like a very tense, methodical thriller with undertones of morality and social justice at hand. And while I do think that this is not an outright right look, I couldn’t help but feel like The God Committee never took advantage of its promising premise.

The film follows Dr. Andre Boxer and Dr. Jordan Taylor, two members of a committee that decide who in their hospital based on overall health and other attributes like their support system, job, social class, and insurance, get the opportunity to receive an organ that will save their lives.

Boxer and Taylor are also seeing each other in Secrets, which adds a complete of interest into the mix, although their ideals are much different.

One day a heart arrives at the hospital and the committee must band together to decide which one of 3 individuals receives the organ.

Fast forward seven years into the future as Boxer is dying and need a heart transplant to keep him alive to give him enough time to finish his groundbreaking research.

As the film begins, we are immediately thrust into this heart-pounding for lack of better words situation that you couldn’t wish upon your own works enemy.

All three of these people in line to get this heart to have reasons why they should receive it and also issues that could keep them from securing it.

The group of five appointed decision-makers, file into this small claustrophobic room to make their choice. This is where The God Committee works best as these doctors race against the clock to make this difficult and important decision.

I couldn’t help but think back to the classic Chamber piece 12 Angry Men, which breathtakingly took a small single space, filled it with an ensemble of outstanding performers, and allowed the viewer to be a fly on the wall as they came up with their life-altering verdict.

Of course, Kelsey Grammer and Julia Stiles are not Henry Fonda or Le Jacob, but the God Committee had a chance to take advantage of this situation and create some hope intention, much like in that classic film.

And while there are some great scenes here that are nerve-inducing as they deliberate, I never felt a sense of urgency.

These doctors have one hour to make this decision, yet throughout the movie, they keep taking lunch and coffee breaks to quibble amongst themselves.

How do you expect to hold the audience’s concentration and retain this tension if you feel like these characters don’t have enough respect to take full advantage of these 60 minutes to make a fully formed resolution?

The other issue I have here is that the film uses the plot device, a fast-forwarding and rewinding us back and forth between the years 2014 and 2021.

And while I appreciate the movie trying to take the events from the past and bring them full circle, these scenes in 2021 were never as engaging as the ones that took place in the decision room.

It felt like every time writer-director Austin Stark was finally about to reach the level of tension that he’s so obviously desired, he would force it to dissipate by making the time jump again.

I’m not familiar with the play that this film is based on, so I don’t know if this is how it was originally written or if Stark made this creative decision on his own. Either way, it just doesn’t work.

The cast is all serviceable here, even though I think are two leads. Julia Stiles and Kelsey Grammer are probably the weakest of the ensemble.

It is Colman Domingo as the lawyer turned Reverend Father Dunbar and Law and Order Patricia R. Floyd as Dr. Maryanne Wilkes, who are the real standouts here for me.

Both of them play conflicted and compelling characters stealing every scene that they are in. Though they are never given enough time to explore their complexities fully.

The God Committee at times can be a thoughtful and sobering meditation on our social inequities and moral compasses.

It can also be in certain scenes and anxiety-driven and nerve-racking Chamber piece, but the film is constantly getting in its own way. Providing a final product that never adds up to the sum of its parts.

So I am going to give The God Committee 2021 movie C-Minus. 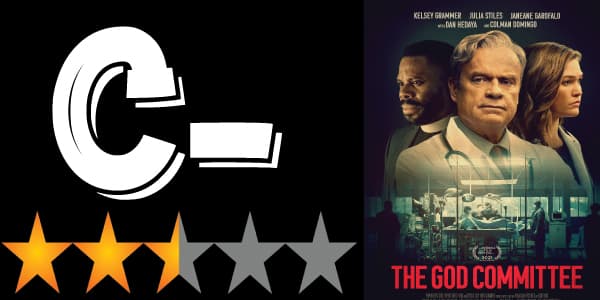 Though the film had all of the makings to be 12 angry men like dramatic thriller Austin Stark the God Committee is a frustratingly, unfocused piece of work that rarely takes advantage of its talented cast and gripping plot.

The God Committee will be in theaters and streaming on VOD Friday, July 2nd. So if you got the chance to watch it, comment below with your opinion about this film.

Guys thank you so much as always for reading the review of The God Committee 2021 movie. See you next time.

Check out the trailer of the new drama thriller film, The God Committee Movie.