The Forever Purge 2021  is an American action horror film that is the fifth and final film of The Purge franchise and serves as a direct sequel to 2016’s The Purge: Election Year.

All the rules are broken as a sect of lawless marauders decides that the annual Purge does not stop at daybreak and instead should never end.

The Perch franchise has always been a bit of an anomaly for me. The first film that started it all had a fantastic concept but never put it to good use, and that is widely considered to be one of the weakest of the installments, if not the worst.

Then for the sequel, James DeMonaco took people’s advice and opened up this world to see what happened on the outside during the Purge, and he hired Frank Grillo.

This provided us a much more satisfying V movie-style actions, thriller and anarchy, and then an election year.

James DeMonaco then took a back seat and just wrote the prequel film The First Purge, which ended up being a lackluster experiment in my opinion.

And then there’s also a television series too. But for some reason, I feel like that’s completely ignored even by longtime fans.

Now we have this supposed final installment in a franchise that has been known to be wildly inconsistent.

So how does it stack up to the others?

Unfortunately, The Forever Purge, at least for me, it’s probably right smack dab in the middle of this series. It’s nowhere near as good as Anarchy and election year, but I think it’s superior in at least quality to the original and The First Purge.

The film follows a Mexican couple who are taking refuge at a Ranch in the United States. They are living a normal life until the Purge goes into action. And when the 12 hours are up, something that has never happened before takes place.

The Purger don’t stop purging. The couple, the seemingly racist rancher who employs them and the rest of his family, including his pregnant wife, set out for safety.

The President of Mexico has opened up their borders for people to escape the Us and this ever after Purge. But can they get there in time?

One thing that you can always expect from a Purge movie is that there is going to be a lot of on-the-nose social commentary which has never really been a problem for me and is what has actually made these films stand out from the rest of the genre.

You can also expect lots of really creepy creative masks being worn by the perjures, brutal B movie action, and some cheesy cringe-worthy dialogue, and all of those things are alive and well in The Forever Purge.

What I wasn’t expecting after the trailer that dropped a month ago was for this film to end up being so run of the mill, and dare I say it generic. The trailer made this look to be an outrageous bonkers, Mad Max-like thrill ride, which could have been amazing or really terrible.

But I definitely did not expect this to be Justice, simply more of the same, which has ended up happening, and I think that’s even more of a disappointment.

The only difference, of course, is that now most of the action takes place during the daylight, which I think is really taken away from the atmosphere intention that the other installments had.

And you also can’t get away with some of the shots and special effects in the daytime that you could in the nighttime.

One thing that The Forever Purge does have going for it are the capable performers. I do think that Ana de la Reguera, who was last seen in Army of the Dead as Adela and Tenoch Huerta as her husband makes two compelling lead protagonists.

Their bad story about running from the cartel and her fighting off drug Lords in Mexico is quite fascinating, but I do wish that they had explored that in much more detail.

Which is a real bummer, because once again, this is supposed to be the finale, but I’m sure if The Forever Purge makes any kind of decent money at the box office, it won’t be long until the sixth is announced. And if that is the case, I hope they actually give us something different.

So I am going to give The Forever Purge 2021 movie a D-Plus. 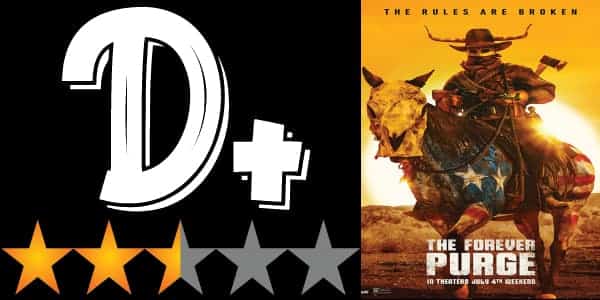 Despite some solid lead performances, the Purge franchise ends not with a bang, but a whimper with this film that fails to provide us with anything that we haven’t seen before in this series.

The Forever Purse will be playing only in theaters Friday, July 2nd, 2021.

Guys thank you so much as always for reading the review of The Forever Purge movie. See you next time. action, horror, Sci-Fi film

Check out the trailer of the new action, horror, Sci-Fi film “The Forever Purge”.