Check out the Review of the new American television miniseries, The Falcon and the Winter Soldier Season 1.

The Falcon and the Winter Soldier Season 1 Cast & Crew

The Falcon and the Winter Soldier Season 1 Review

The Falcon and the Winter Soldier is the latest Marvel show from Disney plus following one division and all six episodes are available now. So we’re going to talk spoilers about this show.

From the beginning of Episode One, it’s clear that Sam is conflicted about accepting the shield from Captain America at the end of the end game.

Even though the end of that film made it pretty clear that he was happy about it. They decided to take six episodes to give him an arc for deciding whether or not he wanted to actually be Captain America, which I guess makes sense.

If you’re Marvel, you’re going to milk every possible story aspect you can out of these characters. I mean, that’s definitely what I would do if I were them.

The style of the show is clearly inspired by what the Russo brothers did with Winter Soldier. It feels very much like a sequel to Winter Soldier or Civil War.

It’s definitely within that same vein. There’s a lot of shaky cams. It’s in the same aspect ratio and easily one of the best things right off the bat is the camaraderie and chemistry between Anthony Mackie and Sebastian Stan as Bucky Barnes.

These two work really well together. It feels at times like a 90s action movie when they’re riffing off of each other.

And I love their relationship. I love the arguments they have because Sam giving away the shield makes Bucky very upset because of his loyalty to Steve Rogers.

And he feels like Steve made this choice and Sam’s not respecting it. And Bucky is still dealing with his crimes as the Winter Soldier when he was being mentally controlled.

And Sam is dealing with the weight of a responsibility that he has yet to fully come to terms with. And he wonders if he even wants this responsibility.

And when Sam does give up the shield and thinks that it will just be displayed along with Steve Rogers uniform, they decide to give it to John Walker, played by Wyatt Russell, and he becomes the new Captain America, much to Sam and Bucky’s disappointment, because this guy is ruthless.

Not only does he not have the super serum yet, but he is also kind of a dick. He’s a horrific character, very easily hateful for the first few episodes.

And he does things that aren’t worthy of being Captain America. And so the show has a great setup, although I have to be honest, even with the setup, I found the first three episodes very watchable.

It was something that was super easy to have on. There were a few great action scenes and some funny moments. And as I said, Anthony Mackie and Sebastian Stan are wonderful in the show.

The development of bringing Zemo in was interesting, and you could tell that Marvel was trying to make him a little comical, especially with the club scene that I knew as soon as I saw it that would be a meme.

But I couldn’t help but think, why am I supposed to like him? All of a sudden? It was sort of like the reversal that Fast and Furious did with Jason Statham character, even though he killed Hohn. You’re just kind of supposed to laugh at him and like him all of a sudden. I just I’m like, that guy’s a dick. But it was episode four where things got interesting for me, especially when John Walker murder somebody at the end decapitating them with the shield. I thought that was really really interesting.

And Episode five is easily my favorite in the entire show. It opens with an amazing fight sequence where Sam and Bucky are fighting against John Walker, using all of their strength to get that shield off of his now super serum body.

But the action takes a back seat in that episode and deals with a lot of mature adult themes and whether or not Sam would even want to be a Captain America in a world that might look at him differently because he’s black.

And meeting Isaiah Bradley and learning his incredibly tragic history with being tested on by the government only heightens those concerns for Sam. This was easily my favorite episode of the show.

But one aspect of the show I haven’t discussed yet is the flag smashers. It’s this group of people who are hellbent on restoring the world to the way it was before the blip, before Thanos came along and wiped out half of humanity and sort of fucked everything up.

My issues with this storyline don’t have much to do with the first few episodes. It’s just the destination. The journey was fine, but once we get to the last episode, everything became very rushed and they tried to wrap things up pretty quickly.

And so the flag smashers as a group sort of became a way of excusing John Walker’s actions, allowing him to team up with Captain America, which I fucking love, by the way. We’ll get to that in a second.

And Bucky against them and they kind of just forgot about everything John Walker did. He got demoted in a way to U.S. agents. And it was just this strange, rushed, haphazard conclusion to something that had a very intriguing setup.

This is the same thing that happened with one division. One division also had a very intriguing setup. And then everything was rushed to come to a conclusion as quickly as possible with a bunch of fight sequences. And both heroes of both of these shows get a new name and a new costume.

So I couldn’t help but notice those comparisons and I think that it might have something to do with the fact that Marvel’s new to TV and they might not yet have the guts to end on a lot of cliffhangers to leave things hanging.

One division might not have more, but there’s a strong possibility, from what I understand, that Falcon in the Winter Soldier going forward could have another season and so the fact that they were so quick to conclude everything and sort of tie all the loose ends and wrap everything in a bow made the more mature themes that they discussed in the previous episodes feel not as impactful as they could have been.

All that being said, I still enjoyed watching the show considerably, mostly because of Anthony Mackie and Sebastian Stan.

They’re awesome in these roles. And I love seeing Sam as Captain America. That’s what I just kind of expected was going to happen after end game.

I didn’t know we’d get a six-episode arc where he decides to be Captain America again, but I still like seeing him train. That was a bad-ass rocky training montage and I love his costume. He looks fucking cool.

And even though I knew from the beginning of Episode one when he gave up the shield and John Walker took it, I knew that eventually, of course, Sam would be Captain America.

If he didn’t, it would be like the most disappointing thing ever. So I’m you know, it’s not like I didn’t know that, but it was still nevertheless really exciting to see.

And those parts of the show work for me. The character stuff is great. Marvel is always very good with character. And I think that’s why the majority of their movies’ work is character.

They understand that when it comes to episodic entertainment and even though this is actually a TV show in their movies or movies, the best part about Marvel is that it feels like a long-running TV show and that you love the characters and you will still watch even when some of them aren’t as good as the others.

And that’s what the best long-running entertainment can do when you have great characterization. This show still does, although I wish the writing and the plotting and what they made the characters do throughout this show felt more cohesive.

It feels at times like two different shows and not everything always worked for me, but I still mostly enjoyed watching it.

I’m going to give The Falcon and the Winter Soldier Season 1 a B-minus. 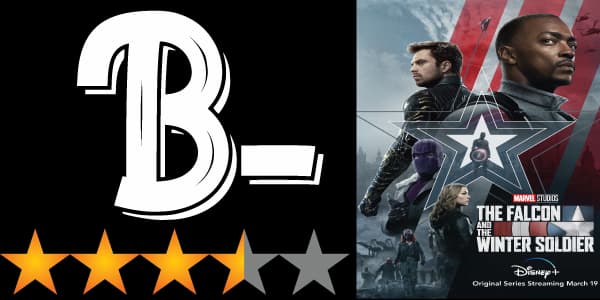 It’s not quite as good as one division. I think that that show had a more executed vision for lack of a better word, and this one had great intentions and some great plot developments with characters. And Episode five is one of the most, like, mature things Marvel’s ever done.

It just rushed to a quick conclusion similar to one division. So hopefully with Loki, they can kind of streamline this a little better.

I know this is very much so an experiment for Marvel. They’re figuring out what they want to do with TV and for the most part, they’re doing a pretty good job. But I think conclusions are where they’re lacking right now.

Guys, thank you so much for reading the review of The Falcon and the Winter Soldier Season 1. See you next time.

The Falcon and the Winter Soldier Season 1 Trailer

Check out the trailer of The Falcon and the Winter Soldier Season 1.

Top 10 Spider Movies of All Time