Check out the review of the new Australian mystery drama thriller film by Robert Connolly, The Dry 2021 movie.

The Dry 2021 film is an Australian mystery drama thriller film directed by Robert Connolly and written by Connolly and Harry Cripps, based upon the novel by Jane Harper.  And starring Eric Bana, Genevieve O’Reilly, Keir O’Donnell, and John Polson.

Aaron Falk returns to his drought-stricken hometown to attend a tragic funeral. But his return opens a decades-old wound – the unsolved death of a teenage girl.

The dry is the kind of nuanced, meticulous, and slow-burn murder mystery that we so rarely get nowadays.

In a time when bigger is always perceived as better. These special hidden gems that really take their time to tell their story, build their tension, and to create these intimate character studies, really get lost in the shuffle.

And that’s why I love critiquing films because you get to discover these hidden gems and share them with others.

What makes this movie so unique is we get two equally compelling mysteries for the price of one. Our lead character Aaron Falk played by Eric Bana is returning to his childhood home for a funeral.

Where a lot of the people that he left behind do not like the fact that he has returned. The funerals for Aaron’s old friend, his wife, and son.

But the thing is, is that his old friend is the prime suspect in these murders. But Aaron doesn’t think that everything adds up. So he stays to investigate.

All the while, he becomes haunted by memories of a decades-old tragedy that led him and his father to leave in the first place and why no one in town trusts him.

Like any good mystery, we start to peel back the layers of this crime one by one, and each deeper layer adds to the intensity and intrigue of the film.

We begin to get closer to all of these supporting characters in this small town, all of whom could be the murderer.

But there’s also this lingering suspicion that the people we trust the most also seem to have the most to hide. All the while, we are slowly getting these flashbacks, revealing what happened in the past as Aaron is trying to piece together his memories.

Honestly, it is just so refreshing to see a film use flashbacks in such a successful way. I feel like movies, especially recently, have used flashbacks as a crutch for lazy storytelling. This is certainly not the case here.

Also, the cinematography in this film is amazing. This desolate landscape of a town struck by this unforgiving drought is cut so beautifully here and adds this uncomfortable feeling of isolation and desperation in the viewer.

While I was watching the film, I realized I was drinking a ridiculous amount of water because my mouth was so dry. Talk about transporting your viewer into your film.

Eric Bana, who has disappeared from the spotlight and any starring roles in recent years except for his stint on the USA show, Dirty John comes back in the dry with a vengeance.

His performance here is one of his best to date. As we are peeling back the layers of this mystery. We are also doing the same thing to his character, learning who this man is, his demons and his grief, and why he is constantly driven towards the truth.

This is a superb performance and reminded me of how much I actually missed this actor. And the rest of the supporting cast is also quite good.

But that also leads to my only real qualm with the film, and that is there is such a large ensemble of characters here who are all involved in this web of deception, lies, and murder.

And most of these characters are quite engrossing, but none of them get any time to breathe or to feel fleshed out except for the lead character Eric.

There were a lot of moments in the movie where I was like, wait, who is that guy again? Why is that name important? Who the fuck is she?

I literally think that there are just too many damn characters in this movie for all of them to actually feel lived in. As the dry build and builds crescendos into a finale that I will not soon forget.

And the film also ends up dealing with a lot of heavy subject material that I was not expecting from the get-go. But I do believe it deals with it respectfully and gracefully.

And the last final moments of the Dry film provided everything you would want at the end of a mystery. A bit of closure, a touch of melancholy, a hint of satisfaction, and the haunting feeling that even though these mysteries are solved, their implications will continue to live on.

So I am going to give the new  Crime, Drama, Mystery film The Dry a B. 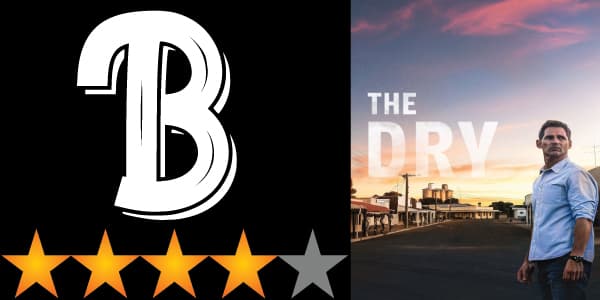 Although this film does require a certain amount of patience to get through that some viewers just might not have. The dry is a slow burn new murder mystery that is compelling, nuanced, and absolutely fascinating to put together.  Add in a haunting and emotional gut-punch of a finale and you have one hell of a masterful film.

The dry will be released in theaters on May 21st, 2021, but it was also be streaming starting April 9th at this year’s San Francisco Film Festival.

Guys thank you so much for reading the review of the new  Crime, Drama, Mystery film The Dry. See you next time.

Check out the trailer of the new  Crime, Drama, Mystery film The Dry.