Check out the review of the Dutch black comedy thriller film The Columnist (De Kuthoer) by directed by Ivo van Aart.

The Columnist (De Kuthoer) is flooded with anonymous, nasty messages and death threats on social media. One day she has had enough and she decides to take revenge.

The film definitely starts out in a good place. The deadpan dark comedy works very well and I found myself immediately drawn to Katja Herbers as  Femke.

Katja Herbers relishes this role perfectly, landing the comedy at the beginning and the much darker facade of her personality as the film progresses. You really can’t take your eyes off of her because she is this fascinating mix of gentle and thoughtful, but also devilishly twisted and relentless. Herbers nails the role even when the writing does her injustice.

Where do you think the columnist starts to falter? Is it after Fonkoze’s first kill? We’ve grown to have empathy for this woman who is literally attacked ruthlessly online with trolls calling for her to be murdered and that she’s a pedophile, among many other horrible things.

But once she commits her first act of violence, there is no remorse, no grappling with the gravity of what she has done. She just all of a sudden is a sociopathic, heartless killer. And that does not fall in line with the woman that we have gotten to know so far.

As the kills continue, I started realizing that the comedy had pretty much disappeared and this just straight up became a violent satire, which I was OK with. But the kills needed far more sprucing up and a little bit more creativity.

I also came to the realization that there were absolutely no women who were harassing her at all, or at least whom she decided were worth getting revenge on, which even though I completely get that most trolls do happen to be men, I would have liked to have seen that be balanced out.

I do think that the film nails the ending, though. Which has a huge impact, even if it is a bit on the nose for its own good.

But everything else in between all of this timely commentary on free speech and the pros and cons of social media feels muddled.

There’s a hypocrisy to Femke championing her daughter’s right to free speech at school and then going out and murdering people who are exercising their First Amendment rights.

The film is also attempting to say something about the masks we create for ourselves, for the public eye. In her relationship with a horror author who wouldn’t hurt a fly in real life. All the while she is going around murdering people whilst keeping her proper naive persona.

All of these ideas are worth exploring to build up the film’s debate, but they are never tackled head-on, so the film feels like it lacks a voice.

I might sound like I hated the film, which I did not, but there was so much potential here to have something to say while giving us in uproarious, dark comedy sprinkled with some amusing kills. But the columnist is either too afraid to actually share its opinion or it doesn’t even have one.

So I am going to give The Columnist (De Kuthoer) movie a D+. 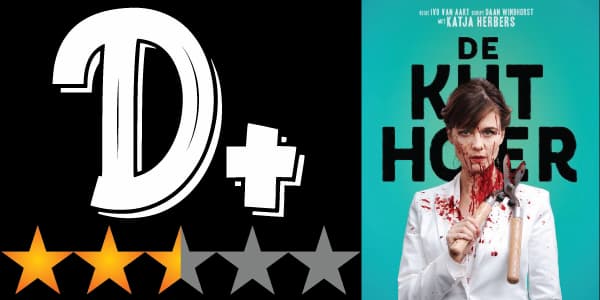 While the film can be an entertaining bit of gruesome wish fulfillment for anyone who has been bullied online with a knock-out performance from Katja Herbers, The Columnist (De Kuthoer) movie has a lot of ideas and things it wants to say but lacks a defining voice to share them.

By the way, The Columnist film will be available to stream wherever you watch your movies on May 7th, 2021.

Guys thank you so much for reading the review of The Columnist (De Kuthoer) movie. See you next time.

Check out the trailer of The Columnist (De Kuthoer) film to take an idea about it before watching it.