The Chair 2021 is a Netflix Comedy Drama US TV Series. It is 6 episodes and each episode is 30 minutes long.

At a major university, the first woman of color to become chair tries to meet the dizzying demands and high expectations of a failing English department.

Netflix is The Chair at first glance does not sound like the most interesting show on the planet, who really wants to bend, watch and spend time with the aging faculty of a prestigious college.

Though its premise might not Garner much excitement, The Chair is as timely a show as they come.

And although I feel like this first season has only scratched the surface of its potential and what it can accomplish, I think it is a firecracker debut nonetheless.

Sandra Oh, who, after years on Grey’s anatomy, finally got her time to show shine in the Emmy Award-winning Killing eve, which will debut its final season in 2022, was born to play this role in The Chair.

The veteran actress chooses the scenery in every moment that she is given in this show, and she proves she is one of the most watchful performers working today.

The character she plays Ji-Yoon Kim is a complicated and tragic one. Although she has so much to give and a determination to succeed, she is constantly being tur down by everyone else around her.

In any other performer’s hands, Ji-Yoon Kim would be a character that you only felt sorry for and probably not have been captivated by.

But Oh injects every ounce of herself into this role. And she is breathtaking. Though at times it can be exhausting for the viewer to be put in her shoes. As the despair of the series deepens, she never allows you to loosen your grip on rooting for her to triumph.

What The Chair has just started and what I am so excited for them to continue in future episodes is the observations of the disparity between generations.

I can’t think of another series that has tackled multigenerational conflict in such an astute way.

The senior teachers who have tenure are being forced to retire. Although they have years under their belt and teaching, do they still have more energy and drive left in them?

The students of the College are fighting for their voices to be heard, yet it seems only a few members of the faculty are willing to hear them.

The middle-aged white male Professor who has always been touted by his students is having you guessed it a midlife crisis, and he is on a journey of self-discovery to get through his grief and find out exactly what kind of teacher and human being he actually is.

It is so rare to see a show successfully represent so many people of different ages in a way that feels authentic and rings true like The Chair.

And the showrunners, including actress Amanda Peet, have found the perfect setting to take on these hot topics of race, sexism, ageism, and cancel culture, among many other things, in that of a collegiate school.

And when it comes to the supporting cast, they are all fantastic but never given enough time to shine or flesh out their characters. And that is my major issue with The chair, despite my ringing endorsement for it.

Once again, Netflix has a winner on their hands, and we are only given six half-hour episodes to invest ourselves in this world and these characters.

It feels as if the showrunners have just gotten started peeling back the layers of all of these issues within the story, and then they’ve been forced to conclude it.

The final episode of the season feels so rushed that I nearly had a condition once I realized that that was all we are going to get.

Netflix needs to realize that to invest audiences in a show and to leave a lasting impact, we need more time. Six episodes will never be enough.

And although The Chair does its darndest to say everything that it wants to, there is a feeling of that’s it that pervades as the final episode’s credits roll.

Luckily, despite this one issue I have with The chair, the only reason I have it is because the six episodes we’ve been given are so good.

The show has done a fantastic job balancing dark and dry humor, creating fascinating character studies of people of different races, genders, and ages, and finally tackling hot button issues without ever taking itself too seriously.

The Chair has a lot to say, so hopefully, Netflix will allow it to spread its wings and broaden its scope in its second season.

For entertainment value, The Chair can be a bit of a depressing watch. There are times when it feels like nothing is going right for anyone, and all hope seems lost.

But the showrunners are able to balance this very pointed dark humor with the endearingly blood characters and hot button issues so well that the episodes fly by and you’re just left wanting more.

This series is stacked top to bottom with incredible performances. Sandra Oh continues to show why she is one of the best actresses working today, along with wonderful turns by Holland Taylor, Jay Duplas, and Nana Mensah.

The direction could be a little bit bland, but this show is all about the writing, and it has some of the best writing on television all year. 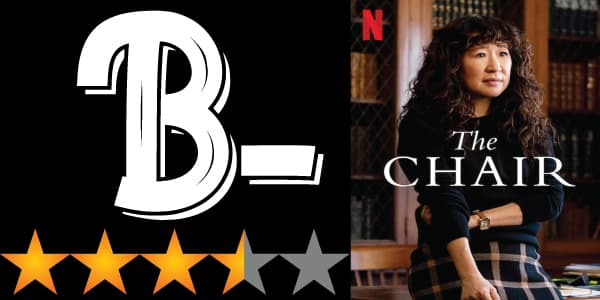 And that means despite The Chairs first season feeling very rushed near the end, and the fact it is really deserving far more time to flush out its story and characters. It is still a rough watch.

Honestly, even just for Sandra Oh’s incredible performance alone. But this series really has so much to offer, and probably even the potential to be one of the best of Netflix original programming. It’s not there yet, but season two could take it there.

Check out the new Comedy Drama  TV Series The Chair 2021.