The Birthday Cake movie 2021 is an American drama, mystery, thriller, and crime film by Jimmy Giannopoulos.

On the 10th anniversary of his father’s death, Giovanni reluctantly accepts the task of bringing a cake to the home of his uncle, a mob boss, for a celebration. Just two hours into the night, Gio’s life is forever changed.

Young Gio who’s played by David Mazouz brings a birthday cake baked by his loyal mother, played by Lorraine Bracco, to a memorial celebration for the tenth anniversary of his father’s mysterious death hosted by his uncle, played by Val Kilmer, a Brooklyn mafia boss.

His life begins to change as he pieces together what really happened to his father many years ago, coming face to face with a kind of violence that he’s been trying to avoid his whole life?

The dramatic thriller is directed by Jimmy Giannopoulos as his feature film directorial debut.

I adore Ewan McGregor and will pretty much watch anything that he’s in. He’s wonderful in this film, as expected. And rumor has it that he filmed his scenes and only three days.

I thought  Shiloh Fernandez was the perfect Gio. He is young and naively innocent. I’d never seen him in anything before, but now I’m a fan. I thought he was perfect.

He looked genuinely Italian for the role, but he’s actually half Portuguese and half Russian. I love it. Also in New York City is one of the characters in a movie. You really get a flavor for the city in this film.

The director stated that quote

New York City can be portrayed in a million different ways and has a fabric that is incomparable.

I completely agree. The director tried to create a film in real-time. So we get to experience things as Gio does, as he makes his way from his mother’s house to his uncle’s house while carrying a birthday cake.

I loved seeing Gio’s City and the world through his eyes as he walks through the streets and comes across FBI informants, friends, relatives, a bachelorette party, strip club patrons, store owners, and many more people.

Some scenes didn’t necessarily give you new information, but they offered a big taste of Gio’s colorful surroundings.

The taxi driver scene was hilarious and the standout in humor for the movie. Although the movie really is more of a dramatic thriller.

The film does an excellent job painting a picture of the glory days when the mob ruled the streets of the Big Apple. Yet the movie is set in modern-day Brooklyn.

If you’re a fan of The Sopranos, that popular TV show that won a ton of Emmys, you’re going to love this.

Lorraine Bracco and Vincent Pastore both starred in that popular TV series that won 21 Primetime Emmy Awards and received one hundred and eleven nominations when everything was said and done. That’s amazing.

There are things I didn’t like about this movie. Like I don’t really enjoy watching movies about people who live in the gutter. And while this movie is extremely well done, I kind of felt like I needed a shower after watching the movie because everybody was so bad and icky.

However, it’s done well, I’m just saying. It was also really heartbreaking to see Val Kilmer as he struggles in the aftermath of his real-life throat cancer.

So good for him for getting back out there in movies, even though it was really uncomfortable to watch him. When we think of The Godfather and his original speech impediment.

I guess you could say it kind of was fitting that this mom boss had another kind of a physical speech impediment. Anyway, you’ll see.

I loved Val Kilmer and Batman Forever and but he did such a good job. The timeline might be a little bit confusing for some viewers.

And by the time the end of the movie came around, I wanted more details. So the movie kind of ended suddenly, I thought.

This movie is not appropriate for kids and kids really would be bored anyway. There is a lot of bloody violence. There’s some profanity, including crude language and F-bombs, point-blank murder with blood splatters. You see a topless woman at a strip club.

And there are some subtitles that need to be read. So little kids wouldn’t be reading those. And again, you don’t want your kids watching this movie.

Some themes that are illustrated well and lessons learned are about family loyalty, community revenge, and even integrity. 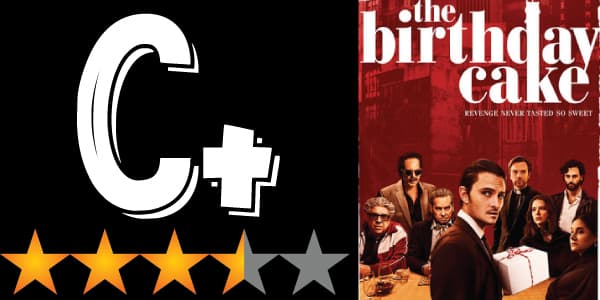 I think there will be many people who really enjoy this film and the mobster life that it portrays. The characters are very well defined and there are some valuable lessons learned in the movie as well.

The Birthday Cake Movie will be released in theaters and on-demand on June 18th, 2021. The movie is rated R and it’s an hour and thirty-three minutes.

Guys thank you so much as always for reading the review of the new movie The Birthday Cake Movie 2021. See you next time.

Check out the trailer of the new drama, mystery, thriller, and crime film of The Birthday Cake Movie 2021.

Top 10 Spider Movies of All Time