Today, we’re going to be going over Netflix’s DC Comics adaptation of Sweet Tooth, produced by Robert Downey Jr. and his wife.

As far as recent big-budget Netflix series go that have premiered in the last couple of months, we haven’t gotten anything really exciting or groundbreaking from the streaming giant.

Does Sweet Tooth end that dry spell? Let’s talk about it.

The Sweet Tooth show was created by Jim Mickle and Beth Schwartz based upon the DC Comics series by Jeff Lamya.

A boy who is half human and half deer who survives in a post-apocalyptic world with other hybrids.

Hmm!! Another post-apocalyptic series. It seems that every other television show out there at the moment seems to take place during the end of the world. And what happens after?

Although I am a big fan of this genre, I’m not going to lie and say that I’m not getting a little worn out on it. The creators and filmmakers of these projects really have to inject some heart and ingenuity into them for me to really grab, hold and stay interested nowadays.

And above all else, they really need to find a fresh and different take on the genre or it just gets lost in the shuffle. And I can say this wholeheartedly. That sweet tooth is definitely different.

The show follows our young protagonist, Gus, who is a half-human half deer hybrid, and his father as they hide away from the outside world that has been ravaged by a virus.

As the world was thrown into chaos, babies started being born as human-animal hybrids. And while some people found this to be Earth’s way of healing itself, others have blamed these hybrids as the cause for the virus and had sworn to eradicate them all.

Gus’s life is turned upside down when Tommy Jepperd played by Nonso Anozie comes into his life and sweeps him up in an adventure across the states to find his Long-Lost mother and hopefully find others just like him.

One thing that is so apparent about this first season of Sweet Tooth is that it is writing a very fine line of being cutesy and for lack of a better word edge and Sweet and a serious adult dystopian tale.

I’m not sure if the show completely pulls it off, especially in some scenes at a hybrid refuge. That almost made me feel like I was watching a children’s television show.

But for a series starring a young child with antlers, I believe that sweet tooth can be gripping for both children and adults.

There is some cursing here and there in some scenes of peril, but pretty much this is a show that the whole family can enjoy on many different levels.

One of the reasons it succeeds is because of its young star, Christian Convery, who holds the entire series on his shoulders and does it with ease.

Not only is he adorable and precocious, but he also handles the heavy emotional beats of the show so well. There was not a moment in this series that I felt like I was watching a cloying child actor overreact. So in my book, that means Convery is a pro.

Also, Nonso Anozie as his right-hand man and protector is finally able to show off his acting chops and what a warm and endearing presence he can be. After being completely wasted in the Artemis Fowl film in a role that is very similar to this.

I must say that I was a bit bothered that we got very little character development for Tommy Jepperd in the first half of the season, but the showrunners are able to mend that as they close it out.

Sweet Tooth is also one of Netflix’s most gorgeous-looking productions. It is so vibrant and the colors really pop off the screen.

The worldbuilding is also top-notch and on par with Netflix’s early 2021 series Tribes of Europa that I am hoping and praying gets a second season.

The world that they have created here definitely looks like a banged-up version of our own, but has its own unique quirks and rules that allow viewers to fully feel transported into its realm.

I also think that the story is quite engaging and the mysteries created here are bountiful, even if the resolutions and the revelations are a bit underwhelming.

I also couldn’t help but feel like there were a few episodes in the middle of the season that was almost filler. It is like one of the many adventures that didn’t have much of an impact on the overall story arc and that made the overall pace of this first outing suffer just a bit.

At the end of the day, though, I’m not sure exactly whose sweet tooth is for. I think there will be many kids and adults who do embrace it. But I also think that many will ignore it completely for how utterly strange it is.

I also see adults turning it off if they aren’t watching with their families because there are many moments that do feel like you’re watching Kids Entertainment.

And there will be many parents who turn it off if their kids are too young to be watching some of the more mature content in the series.

Hopefully, there will be enough viewers who are able to embrace that childlike wonder inside of themselves, because Sweet Tooth is a sweeping and gripping adventure and definitely deserves a second season.

This is decided based on two different scores entertainment value, basically how bendable or watchable the series is and production quality, which includes the writing, acting, directing, etc..

Sweet Tooth is an adventure that I was completely swept up in, although I do believe there was a couple of filler episodes that halted the pace and the finale wasn’t as impactful as I thought it could have been. So that receives an 81 % for entertainment value.

And for the quality of the production as a whole. This is a beautiful-looking show with some fantastic performances from the lead trio and the world-building completely transported me.

But I think that the writing at times faltered at creating a balance of tone to really tell its audience who it was for. So it receives an 85 %.

So I am going to give Sweet Tooth Season 1 TV Series a B. 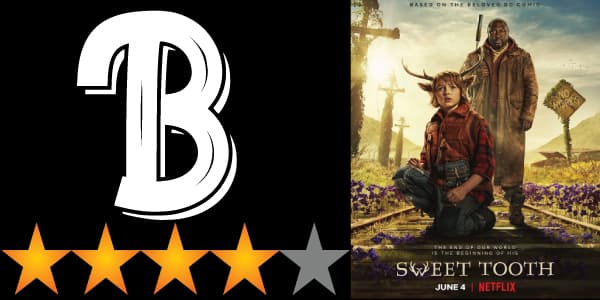 And that means, I believe, that you should watch Sweet Tooth, a weird postapocalyptic family show that sounds up your alley.

All eight episodes of the first season of Sweet Tooth will be streaming on Netflix Friday, June 4th.

Guys thank you so much for reading the review of the new Netflix TV Series, Sweet Tooth Season 1. See you next time.