Check out the review of the new  Australian horror mystery film, Sweet River. It is a movie that is a serial killer mystery with supernatural elements.

So did it provide the thrills and the shocks from the best of the genre? Let’s find out.

Hanna searches for her son’s body leads her to the sleepy town of Billing, where her investigations uncover more than she expected and threaten to expose the town’s secrets, secrets that both the living and the dead will fight to protect.

Let’s start off by saying that Sweet River is a really hard egg to crack. On one hand, it is a gorgeously directed, well-acted, and effectively eerie film that had me guessing all the way until the end.

But on the other hand, the guessing is due to the fact that you have absolutely no idea what in the hell is going on half the time.

This is a film with all of the right puzzle pieces, but somehow none of them fit together.

Let me go further into this. Hanna, our lead protagonist, played by Lisa Kay, has gone to this town in the middle of nowhere that is known for growing sugar cane and also notoriously for the drowning deaths of multiple children in a horrible bus accident.

But she has arrived to figure out the unsolved disappearance of her young son, who the authorities in the area have stopped searching for.

She ends up renting a cottage on a sugar cane farmer’s plot of land. And while beginning to uncover the secrets behind this town’s tragedy, she is haunted by the children who drowned in the river who have made their home among the cane.

Sweet River is definitely a slow burn, which I pretty much always enjoy. It really takes its time to divulge its secrets, peeling back the layers one by one.

But something went really wrong in either the writing of the film or the editing of it, because so much doesn’t add up here.

I even felt myself rewinding back to certain parts of the movie to see if I had missed something for a shocking revelation to make more sense. But I could never find that gratification.

Things will happen in Sweet River that comes out of nowhere and don’t make a lick of sense to what is actually going on in the movie.

I don’t want to give away any spoilers, so I will just use this as an example. Hanna, we learned pretty early on is a recovering alcoholic, but things start to take a downward spiral during her investigation. So of course we as an audience are inclined to see her alcoholism as a foreshadowing to her drinking again.

But literally out of nowhere she all of a sudden has a dealer and is doing oxy and becomes a druggie. There’s no scene with her battling her demons on if she wants to dabble into using substances.  We are just forced to accept that she’s a hardcore user now.

There are so many instances like this in Sweet River, major plot points not adding up or fitting together. Also, plot devices being thrown at us left and right with no explanation that it makes for a very frustrating experience.

It wouldn’t be so frustrating if it was just a garbage film that no care had been put into. But Sweet River is quite obviously a passion project with wonderful production values and has so much going for it that the gaping plot holes are all the more angering.

The cast here is quite good, especially Martin Sacks, Mr. Drake, the farmer whose land Hannah is living on. He is gruff and mysterious, but also morose and gentle, a man haunted by his past but also clinging to it as well.

Sacks pulls off an incredible balancing act, not ever allowing the audience to know if you can trust him or not, all the while being absolutely fascinated by him.

McMillan’s direction is also superb. He is able to achieve maximum tension throughout the entire film, even as it morphs into the horror genre.

Sweet River is drenched in dread and once again, the slow burn comes completely in handy as it gradually changes and grows into something more sinister than when it first began.

There were many moments that I let out a little help or jolted out of my seat, not because of any jump scares, but because the direction is so effective in creeping you the hell out.

Many people will compare this to children of the corn, which quite obviously has had some inspiration from. But I would say that this is more of a spiritual successor to that film than an outright copycat.

But at the end of the day, despite having so much going for it, Sweet River fails to put its puzzle pieces back together. And that is just really hard to look past.

So. I going to give the Sweet River film a C. 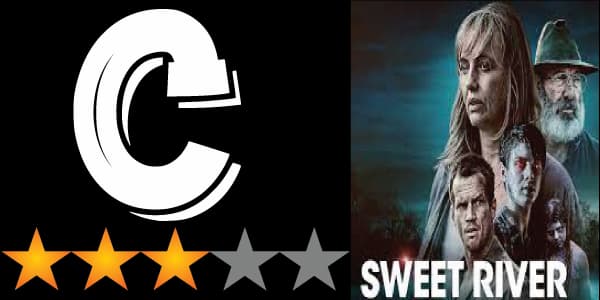 Although in the effectively chilling film with a riveting mystery at its core, Sweet River is an overall confounding experience because of its lack of cohesion and inconsistencies.

I still think it’s worth a watch, though, and would love to hear others’ thoughts about it in the comments down below, because honestly, this rating could teeter in either direction.

Guys thank you so much for reading the review of Sweet River Movie. See you next time.

Check out the trailer of the Australian horror mystery film Sweet River film.