Stuber 2019 Movie Is an R-rated action comedy about a tough guy cop who has to get an Uber driver to help him catch a heroin smuggler because he had Lasik surgery earlier in the day and can’t see.

So as a big fan of both Bautista and action movies. This one’s been on my radar ever since I first saw the trailer. Be sure to tell me what you thought about it down below in the comments section.

let’s get started talking about the good things in the movie.

The first thing that comes to mind is that the movie is really funny. Both Bautista and Kumail Nanjiani are really funny and bring kind of their own comedic personas into this film and have distinct ways that they are funny. But then as it’s a buddy comedy, they have really nice chemistry and interaction with one another in the way that their personas butt heads with each other.

Also, because one of the main plot lines in the film is that Dave Bautista can’t see there’s all kinds of slapstick humor involving him and they pretty much all landed for me.

I never got tired from seeing him bumbling around and bumping into things are not being able to drive, but trying to anyway.

It’s absolutely superficial physical comedy, but the situations, the setups are good enough and he sells it well enough that it just landed for me.

It’s also an R rated comedy, so there’s no shortage of raunchy humor inside of it. That’s probably my least favorite of the humor, but it definitely made me laugh at times. Even when it went crass.

It does a little bit of sending up all the action genre itself. Specifically, they set up some punch lines with the dialog between Batiste and Kumo early on in the film, and they have some nice payoff’s in the second half with what they do with that when it kind of goes into full action mode.

So I thought that metal humor worked pretty well now with this movie. It’s definitely comedy first, action second. But when it goes into action mode, the action is actually pretty good in the way that it’s handled.

They got AECO from the raid and had him face off against Batiste, who’s the big wrestler. So you kind of get some fun and having the guy that’s agile and moves quickly with the guy .

You know this big mess, it just throws people around. And the way that the action is shot inside of it, you can see what’s happening. Even at times it does kind of handheld camera work or can go zoomed in a little bit at times, but it’s done in a way that you can follow what’s happening. You just feel the chaos of it.

And also in some of the action sequences, this really cool shots, one in particular where Dave Batiste goes over to the ledge inside of a hotel and it’s done in a single shot. And so while it is a comedy, the action is quite good.

And finally, as I’ve referenced multiple times before, this is an R rated comedy in R rated action movie. So it definitely gets crass at times. There’s lots of vulgar jokes inside of it

And when someone gets shot, there’s a whole bunch of bluff. There’s some really graphic violence inside of it.

I am  is a fan of R-rated action movies and oriented movies in general. I appreciate that these days we get a lot of PG 13 action that feels a little bit sanitized. So having an R rated movie that’s made for adults, I appreciated that about this film.

Let’s move on to the bad things about the movie.

The big thing here is that this film sticks pretty much straight to the buddy cop formula.You have a ridiculous scenario that brings two opposites together. At first they drive each other crazy and then in the end they come together to catch the bad guys and you realize that they were exactly what they needed to overcome their personal problems.

This movie does not veer from the formula at all, and that’s why it didn’t feel like what I just said was a spoiler at all. Because if you’ve ever seen a buddy action comedy, you pretty much know exactly when everything is going to happen and what exactly is going to happen in this movie.

Other kind of problem here is that they really wasted AECO from the raid. They got one of the top martial arts action stars of modern times. Put him in this movie and he does a little bit of cool stuff inside of it. But there’s nothing really that he does. That’s that distinct stuff that only he can do.

If you’ve ever seen the rain or the rain, do you know that this guy is just a phenomenal talent in here? He’s just kind of a guy that’s a little bit agile and does a couple of stunts here and there, but it feels like anybody could have done that.

There’s so much more that they could have done with his talents inside of this movie while facing off multiple times against Dave Batiste, that if a little bit like a letdown, that you got ego and you didn’t get much more of what he could actually provide.

Also, there’s some pretty big inconsistencies in what his character is able to do. It seemed like he could just sustain any amount of damage and keep going when they needed him to escape. But then when they need him to get caught, suddenly he just kind of stops.

And so is a little bit frustrating the way that they kind of balanced out his character in the way it was kind of written.

Stuber maybe formulaic, but it’s a very enjoyable action comedy. If you enjoy the Buddy Cop films of the eighties in the 90s, you should definitely give this one a try. 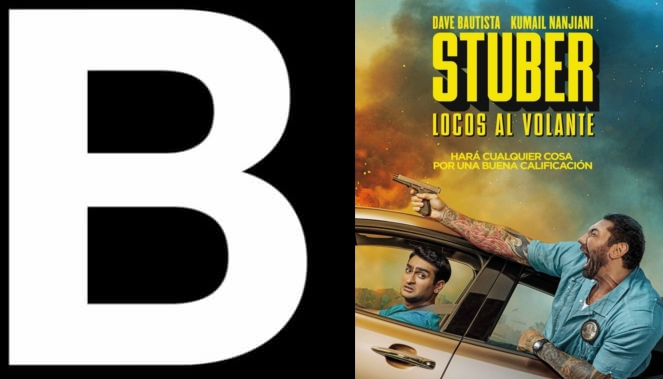 Guys, thank you so much for reading the Stuber 2019 movie review. See you next time.