The Mandalorian, also known as Star Wars: The Mandalorian, is an American space Western web television series that premiered on Disney+ on November 12, 2019. Set in the Star Wars universe, the series takes place five years after the events of Return of the Jedi and 25 years prior to the events of The Force Awakens and follows a Mandalorian bounty hunter beyond the reaches of the New Republic. 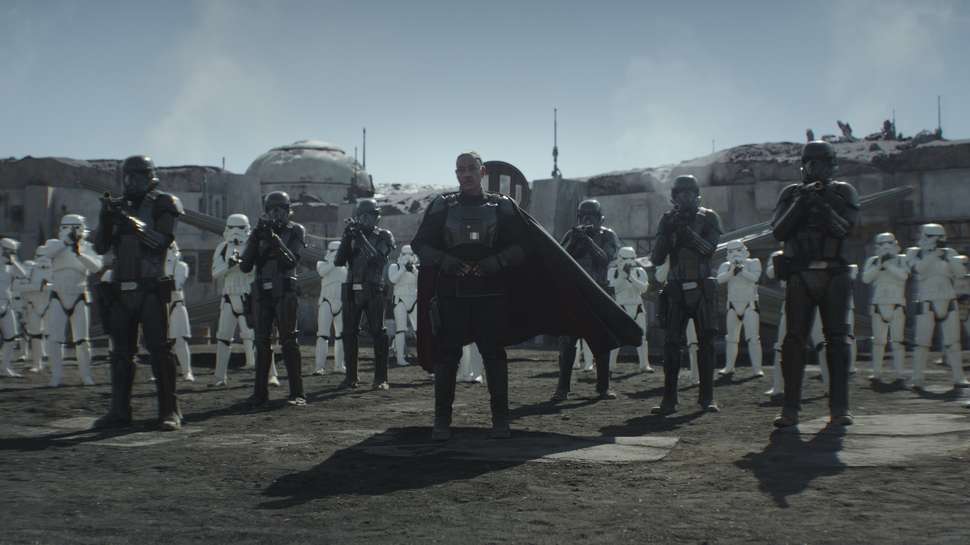 The Mandalorian was created by John Fabbro and had its season finale today. The series is streaming on Disney plus and I was very skeptical about it because over the past year or so I’ve become increasingly disenchanted with Star Wars mostly due to Disney’s lack of a plan.

Combine that with our live-action remakes of their famous animated films. I just felt like Disney was milking us constantly over and over again, and we just weren’t going to get anything of merit.

I was wrong Mandalorian season one is great. Pedro Pascal plays the Mandalorian, a wandering bounty hunter who goes from planet to planet tracking down bounties. He’s a man of few words desperately clinging to his creed. That of honoring the teachings and beliefs of the Mandalorians.

Before now the most famous of them was Boba Fett leading many fans to speculate that the lead character in the series was him since the expanded universe lore had him survive his encounter with the Sarlacc pit.

I’m going to warn you that this review is going to contain spoilers. I didn’t want to do episode by episode reviews. I just want to talk about the whole full series so hopefully, you’ve seen how things were going to get into spoiler territory.

One of my biggest fears going into this series was that it was just going to be a lot of recycled things we’ve seen in previous films. Tap to win over and over again job was sand crawlers.

And I was really worried that it was going to be both a faster somehow. It descendant of Boba fats or some sort of recreation of something we’ve seen before 1000 times. And I’m happy that although there is some and service, for the most part, this show tells its own original story.

He’s hired to track down an asset and bring it back to some Imperials. This asset ends up being with the internet has come to call baby Yoda. And the Mandalorian is instantly taken by this creature, who also protects him from time to time and so he feels naturally inclined to not give this thing to the imperials. And actually protected. Which goes against what he’s used to professionally, but not against his creed because baby iota protects them at 1 point, so now he feels indebted to him.

He’s excellent at communicating emotion without showing his face. Physical acting knowing how slowly or how fast turn helmets, how to deliver a line when to deliver the line and some of this comes down to editing and directing obviously.

You have to know how to direct this helmet and for the most part, everyone involved with the show did. They did a great job of portraying a hero when you never see his face, which I had a hard time wondering if that had ever happened before in movies.

I mean we’ve had villains and side characters, but I had a hard time recalling any shows or movies where the hero is wearing a mask the whole time. Even in a movie like dread you at least get his mouth.

I was shocked at how invested I was in this character without being able to see his eyes. The show also gave Star Wars fans an opportunity to see Dave Filoni behind the camera of the live-action Star Wars property.

He’s very well known for his work on animated Star Wars and so fans are pretty excited to see what he could do with live-action. Deborah Chow who I think directed two of the three best episodes of this season did an incredible job of episode 3 and episode 7. I can’t wait to see what she does on Kenobi.

Rick Famuyiwa directed to really good episodes chapter 2 and chapter 6. that’s a director of Dope, a movie that I really enjoyed and he did an excellent job on the show too.

To be completely honest, it was actually Dave Filoni I thought who made the worst episode. That being episode 5. This is the only episode in the entire season that I flat out did not like.

I think it features some of the worst actings I have ever seen in a big-budget production period. There is fake acting in this episode and I didn’t care about anything.

I am more than okay with a show like the Mandalorian having filler. I think it should have filler. It’s one of the things that’s so great about Star Wars. Because Star Wars originated in George Lucas is mind inspired by old adventure cereals.

That’s what Star Wars is. That’s why the Mandalorian work so well as Star Wars because you can just have these great little mini-adventures all throughout the season. I was happy that it wasn’t just a storyline constantly.

Because they didn’t feel confined by any storyline or any arcs. They could just be this really cool contain thing. There are certain episodes of this season that felt like that to me.

But chapter 5, in particular, you could really feel that John Fabbro was no longer writing. The dialogue was very weak the directing felt listless. There wasn’t much energy to it and this is disappointing.

Because Filoni did a pretty okay job with the pilot. Chapter 5 though is entirely in his hands and you can tell that he hasn’t really directed live-action before. The second week S episode was probably Bryce Dallas Howard’s episode which was the fourth one.

Although I enjoyed it, I certainly didn’t hate. It was basically a retelling of 7 samurai Mandalorian finds a village of people that he helps and there’s an 80 S.T. that I guess was A.I. I actually I’m not entirely sure what was happening there.

Speaking of 7 samurai the show definitely takes some inspiration from samurai films of the past namely lone wolf and cub, which was about a ronin who went on various adventures with a young child in tow. You’ve probably heard this comparison before.

As well as spaghetti westerns from Sergio Leone so naturally I loved many aspects of this show. Gina Carano was actually really good in the show as a former shock trooper. She does the best work she’s ever done.

I liked her and haywire but that performance was very physical and physical only. Especially in the last episode of the show. She actually is required to do some dramatic acting and I thought she pulled it off.

Taika Waititi TD directed the season finale which was riveting. I love seeing Jen Carlo Esposito as this villain just coming in Maaf Gideon getting some serious breaking bad vibes which gave me chills.

And the stuff they did with the I. G. model which was also voiced by Taika Waititi, was surprisingly heartfelt. Seeing him sacrifice himself by blowing up all those stormtroopers to protect baby Yada.I felt something.

With the Mandalorian did for me was not only revitalize a love for Star Wars, but it showed me that Disney is capable of making good Star Wars. But what they need is someone watching over at who has a clear Guiding Light of a path.

They’re already setting up the idea that he is now going to find out where baby Yuda comes from in season 2 which is great. So I hope from here on out Disney learns from their mistakes of not knowing exactly where the sequel trilogy was going to go and they just focus on creating Star Wars like this.

Serialized episodic content that knows where it’s going. Featuring awesome action sequences and by the way, a really good score by Ludwig Geren, he did creed Black Panther this is one of the first Star Wars scores, I’ve heard that’s not from John Williams that is original.

This doesn’t feel anything like what John Williams has done. Everyone else whoever steps foot in the Star Wars universe tends to make a score that sounds like John Williams music not here and it’s awesome.

Except for a couple of missteps this is a really good season and a great start for the show. I’m really satisfied with what I’m seeing and I can’t wait to see more I’m gonna give the Mandalorian season one an A-minus.

Guys, I hope you’re enjoying the show too. Thank you so much as always for reading my reviews. Look forward to more reviews very soon. See you next time.