The movie is about Lucky Prescott’s life is changed forever when she moves from her home in the city to a small frontier town and befriends a wild mustang named Spirit.

Now see that sounds good. And the foundation for this movie is actually kind of promising compared to the first film, which looked beautiful, but it didn’t have any core to it. There were no layers to that story. But when I read the synopsis, I thought, oh, OK, that sounds kind of good.

Let’s get into what works with the movie first before we get a little negative here.

Again, if you’re unfamiliar with the story, it is a spinoff of that 2002 classic and based on the Netflix animated television series Spirit Writing Free, I did not watch that TV series.

So fans of the TV series might be a little bit more accustomed to the storytelling in this one. But I was going in with an open mind.

And right off the bat I noticed two things that were completely different.

There was more involvement from our voice acting cast, which is led by Isabela Merced. And I think she does a good job alongside her costar, Marsai Martin, who was amazing and blackish. And just as an actress in general, both of them play really good friends, and I think that they do a good job.

They’re actually the best part of the entire film. They’re the only actors committed to their roles and their friendship was really sweet. And I like that their charm bled through the screen.

I almost wish that that trio had more time. And I say trio because it’s both of them. Plus another character named Abigail voiced by Mckenna Grace. I thought all three of them did a good job together.

There’s a really cute scene where they overcome their own fears by singing and just coming together. And it’s nice, you know, I just don’t think that there is enough of that in this movie.

But let’s move on to the next thing that at least worked a little bit for me in this film. The soundtrack in general is just much more bearable in the spinoff film.

The first movie had a really weird soundtrack as they used Brian Adams and he had power balance throughout. And yeah, I get it, he’s a good musician, but it just never fit for me.

But here at least, our leading ladies are singing at times where it feels like it just flows with what’s on screen. However, the music is not the problem here, guys. Unfortunately, it’s everything else.

So let’s get into what doesn’t work with Spirit Untamed 2021 movie, which is really a film that has the makings of a heartfelt story but without any soul.

The movie is directed by Elaine Bogan and Ennio Torresan and both of them. I feel like I never had a grasp on what works with this movie.

There are moments at the beginning where I thought, OK, I can see where it’s trying to go. But the film never fully commits and tries to add in so many identical moments and elements from the first film.

The script in general is among the most bland that I’ve seen unfold in animation movies in a very long time. None of the elements came together for the end product and I really was confused at the direction that the story kept going in.

And I know we just talked about the animation, but guys, the style here is completely different from the 2002 movie, which used to be hand-drawn animation.

And this spinoff used 3D animation, which is not a terrible departure. And it’s not awful, especially in 2021 right. We’re so used to seeing amazing animated movies that have so much detail. But this is the complete opposite of all that.

This is some of the most dull 3D animation that I’ve ever seen. And in 2021 this should definitely not be the case. The horses are extremely low detailed and this is a film surrounding a horse.

I mean, when the horse is literally in the title, the name of its spirit you would think that it would look really detailed. But instead, this looks like the first rough draft brought to the big screen.

Now, for context, DreamWorks did outsource the animation to a third party studio and provided a lower budget, which clearly shows. It really makes me wonder why this movie didn’t go straight to Netflix.

I mean, nothing about the film begs for that big-screen experience. And honestly, in a busy summer season, this is a movie that I can see either not making back its budget or making back exactly its budget.

And when it comes to the acting guys, while there are a few actors committed to this role that we talked about, everyone else simply isn’t.

And at the top of that list is a surprising choice. It’s Jake Gyllenhaal, an actor whom I love and he’s great. Just not in Spirit Untamed.

He’s emotionless. It definitely sounds like he’s reading his lines for the very first time. And this is really his worst performance in years. There is no emotion in anything he says.

He could be worried. It sounds like he wasn’t worried. He could be really, I don’t know, happy. It doesn’t sound like he’s very happy. He’s very monotone.

And throughout the film, it really just felt like they had him on set for one day and said, can you read all these lines? And like maybe four or five hours and then go back to whatever you were doing. And that’s not a good thing.

And even though I know this movie is definitely catering to a younger demographic. I feel like the best child’s movies really have a good, compelling story. But this story is just shallow.

The plot involving spirit in our leading lady Lucky is basically identical to the 2002 movie. I mean, there are elements here that are really just about the same.

And I don’t need a carbon copy. If anything, I was really hoping they’d expand on at least what worked a little bit in the first film. Unfortunately, they did not do that and they just threw it up just in 3D style and. Oh, come on, guys.

From the opening act, I just kind of understand where the movie was trying to go. It really felt lifeless. And guys, the character development was also awful. I really don’t think they did a great job at introducing these characters.

And even from the onset, we know lucky because I guess the film is really catering to her in terms of, you know, the development.

But I don’t think anyone surrounding her was given enough time of day for me to really care about these characters. And by the end, it felt more like a two and a half hour movie than an 88-minute experience.

This film really was a chore to get through, guys. And I hate to say that because I was going into this hoping that maybe the story would get a little bit better and they would add a little bit more layers to it.

But unfortunately, everything is very shallow. It’s very surface level. And nothing about the movie really compelled me. And it’s sad to say, but I’m not even sure this film can hold the attention of a child.

So overall, you guys, Spirit Untamed is really a sequel that doesn’t do too much to build on what the 2002 movie did well.

Actually, it takes a complete step back because in the 2002 movie, spirit was detailed. I mean, everything was detailed.

It was vibrant. In each scene, you can tell there was some life and some zest. Now the writing is another story, but at least everything looked good.

And the Spirit Untamed 2021 film, well on both fronts, they kind of fail. I mean, the writing is not very good in our characters are not compelling enough and nothing about what’s happening on screen interested me.

Instead, I was thinking about all of the ways that this movie could have been better, maybe get a voice cast that was committed, start throwing in some dialog that was at least, I don’t know, full of emotion in the life.

But instead, everything we got was really cookie cutter and this film was trying to race to the finish line at the end. And I’m kind of glad it did because it lost a lot of steam by the middle of the movie.

So if you’re a fan of the 2002 movie, I can honestly tell you that you might be a little disappointed with this spinoff.

Because for all the rave reviews I was seeing for the 2002 movie and all of the audiences that were loving that movie, I can’t see them getting into this. I know I definitely couldn’t, guys.

So if I had to rank this movie guys, which I don’t like to do, especially with the reviews, aren’t as positive. I would say that this film is definitely going to be very forgettable as the year goes on.

And especially with the releasing in early June where we’ve gotten some big release states that are announced and some movies that are going to come out, I think that this is going to get lost.

And unfortunately, Spirit Untamed 2021 movie is going to be one of those movies that goes straight to streaming services and maybe kids will pick it up on an off day. But I don’t see many audiences falling in love with this film. 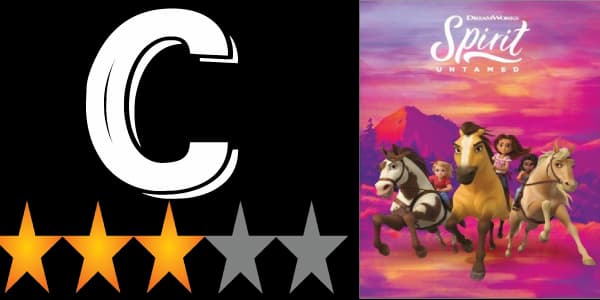 Spirit Untamed’s release date in Theaters is Jun 4, 2021.  So if you got the chance to watch the Spirit Untamed movie don’t forget to share your thoughts about the film in the comments below.

Guys thank you so much for reading the review of Spirit Untamed 2021. See you next time.