Spiral: From the Book of Saw or Spiral 2021 is an American  Crime, Horror, Mystery film that serves as the ninth installment in the Saw film series.  Let’s review it.

Spiral: From the Book of Saw is a 2021 American horror film. It is directed by Darren Lynn Bousman and written by Josh Stolberg and Peter Goldfinger. The film stars Chris Rock, Max Minghella, Marisol Nichols, and Samuel L. Jackson.

A criminal mastermind unleashes a twisted form of justice in Spiral, the terrifying new chapter from the book of Saw.

When Spiral was first announced, I was so thrown off but intrigued by the involvement of Chris Rock, who would have thunk that the brilliant, funny man would have a penchant for torture bad movies? Definitely not me.

But there was something exhilarating about a famous performer who was also a huge fan taking the reins on this series that has such a close place to my heart. And the addition of Samuel L. Jackson and Darren Lynn Bousman coming back to direct all seemed like wish fulfillment coming true before my eyes.

But although I admire Spiral for trying to inject life back into this fading franchise, I think it pretty much missed the mark in every way except for a few bright spots.

Chris Rock plays Detective Zeke Banks the black sheep and pariah of the Metro Police Force who is disliked so much by his peers for his writing out of his partner years ago for the wrongful killing of a witness.

He has plunged into leading the task force of an investigation revolving around the brutal death of one of his fellow colleagues involving what seems to be a jigsaw copycat, utilizing horrific traps to take vengeance on dirty cops.

As Zeke falls headfirst into this deadly game. He doesn’t know who he can trust and who will be targeted next.

So let’s start off with what I really liked about the film, and that is Chris Rock. I loved everything about his performance here as well as his character.

Instead of going full-on tough guy with the role, which I was really worried he was going to try to do, Rock adds in earnestness and almost goofiness to his character, which was really refreshing in a series that tends to take it so far too seriously.

I also enjoyed his character development and the many layers he was giving. Zeke has always lived in his father’s shadow, trying to carve out his own place in the world and in his job, but has never been given the chance to do so because he has never been taken seriously.

Rock has easily created one of the most captivating characters in all nine of the saw films, and I would love to see him return in future installments.

I also really respect Spiral for being timely and actually having some important social commentary that has pretty much been absent since the first installment.

In a time when all eyes are on our police departments because of injustice and corruption. Inserting these issues into the framework of the Sorceries really makes a lot of sense.

Regrettably, screenwriter Stollberg and Goldfinger end up not having much to say about these hot topics, so they pretty much waste the platform they’ve given themselves.

And that leads me to their script, which I think suffers in so many different departments. The dialog is extremely clunky and they are really lucky this time around that they actually have decent performers in this film who can somewhat elevate the words that have been written and the traps that they’ve come up with here, for the most part, feel completely uninspired.

Besides an ingenious trap that incorporates shards of glass being shot at the victim, that was pretty cool.

I also think that the story and revelations are predictable as all hell. And to me, that is unacceptable in a saw movie.

I want to be shocked to my very core and nothing here remotely comes close to that. The ending also just fell completely flat for me, although after further contemplation and watching my buddy Jack analyze the finale in one of his videos, I do think there is more here than meets the eye, but still not a whole lot.

Bousman also doesn’t add any visual flair or ingenuity to spiral, which is a huge disappointment because I was expecting the man to come back with a vengeance after his absence from the last four installments.

The manic editing is pretty much gone here, which will certainly make many people happy. But what’s left is a feeling of a lack of energy.

Also, I want to feel grimy and icky after watching a small film to the point that I need to take a shower afterward.

And despite there being some really savage Gore on display, that feeling of being drenched in depravity is sorely missing.

What I think the biggest crime that Spiral 2021 films commits is, is that in no way felt like a saw movie to me.

And I get it. They wanted to revamp the series with a fresh take and make it all its own, but in turn, they’ve made a film that lacks any sort of DNA of its predecessors besides the inclusion of Trappes, a couple of images like the theme and a moment with a saw and people talking about how this is a jigsaw copycat.

The filmmakers have tried to make a more esteemed production, but they’ve failed at that and in turn also lost a lot of what made the Saw movies leave a lasting impact.

The cast and crew involved said that they were trying to make a saw movie mixed with seven or Law and Order. What they’ve given us here is in no way up to par with David Fincher’s classic and more like a knockoff low-rent version of that seminal television series.

Though I must admit, after all of the misgivings I do have with the film, you better bet that I will be back for the inevitable next installment. Once again, hoping and praying that it reaches the heights of the beloved original. 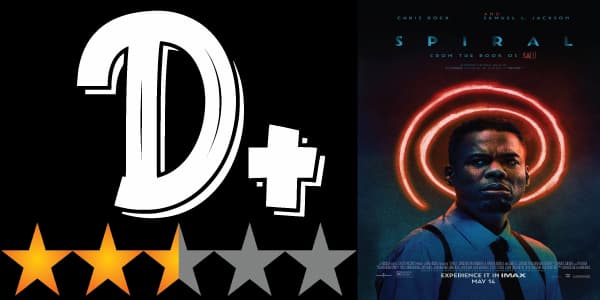 Despite the fervent effort of Chris Rock to reinvigorate the Saw franchise and all of the right puzzle pieces to create something special, Spiral is a bland revamp that falls flat, leaves a little impact, and ends up being a major disappointment

Guys thank you so much for reading the review of Spiral  2021 American  Crime, Horror, Mystery film. See you next time.