Check out the review of the American superhero film based on the Marvel Comics character Spider-Man: Far from Home 2019.

Spider-Man: Far from Home Movie is once again directed by Jon Watts. Stars  Tom Holland is spiderman and this is the first film and spider man history to not take place entirely in New York.

Peter and his friends go on a school trip overseas and encounter a whole bunch of crazy stuff including Jake Gyllenhaal as Mysterio. This is an interesting time for spiderman fans.

Because we get to see an actor actually take steps towards becoming a spider man. He did a lot of small-scale stuff in homecoming and in this movie he has to take a lot of steps towards filling the shoes that Tony stark has left behind.

And after the events of the end game, Spidey has a lot to do here and I had a blast watching him figure that out. I like this movie a tad bit more than I liked homecoming actually. And I didn’t love that film. Like I thought it was really a good time it wasn’t my favorite Spiderman movie or anything.

I still like the first two Remy phones more but it was obviously the best since those movies. This film felt more well-realized, smoother and the narrative flow better. This story was consistently interesting.

It rarely ever gave Peter a chance to relax. He was always moving because he’s trying to impress M. J. and he’s trying to be there for his buddies on this trip and just have a relaxing time.

But at the same time, Nick’s fury is over there like “Hey we got this major problem and we need your help”. And so he’s having to balance this a lot. Which is of course classics spider man never having enough time for your life priorities but also having to be this hero when you’re not really ready to be.

This movie captures that wonderfully and Tom Holland can play Spidey until his 50. As far as I’m concerned help all watch a 60-year-old spider man. Let’s see what we’ve got to do. I mean he had to have a lot of cool cities probably have to do.

He’s so great in this role and I would love to see him play Spidey for a really long time. I also like Zendaya as MJ a lot more in this film. I thought the scenes between her and Peter were really cute.

And they did a good job of extending that relationship and exploring and more. In many ways, this is still a high school romance movie, disguised as a superhero film. But this film does take a few more steps towards being an Avengers movie.

Especially, since Peter has to dig deep within himself and really step up and go against a lot of things in this movie. And I thought they did a better job this time around of balancing the high school comedy aspects with the larger-than-life superhero stuff.

Because they applied this sort of race against time element to the high school stuff. Peter really wants to confess how it feels to NJ and so every single chance that he gets something is always in the way.

So it makes those scenes not boring. It doesn’t make you like wish for him to just start spending some labs and fight stuff again. It sort of invests you in those scenes as well and so there’s always something happening.

And they play it off with comedy quite often and it’s very very funny a lot of the jokes land. Jake Gyllenhaal as Mysterio or something I was really looking forward to for one. I’m a huge Mysterio fan. I’ve wanted this character to be in a spider-man film for a really long time.

And Jake Joan hall is like. He’s just he’s Jake Joan hall and I love that guy so he’s also been circling a spider-man film for a really long time. I’m sure a lot of you know this but at one point he almost was spiderman.

When Tobey Maguire had a back injury when he was filming Seabiscuit. He almost couldn’t return for spider man 2 and Jake Gyllenhaal was going to replace them. So it’s cool to see him in this universe and I thought he was really good as Mysterio.

I didn’t love everything they did with that character though. We’ll talk more about that in another review. It’s just that certain aspects of the way they approached it. We could have just used a little more information. That’s all thank you.

Jon Watts did a great job with the action scenes this time around. They felt a little more intense than in homecoming. It seemed like he was more confident this time with this movie.

Because obviously before homecoming and never done anything that size and you can tell that he’s taken everything he learned on that film and just applied it to this. There are aspects of this, that I definitely think homecoming did better.

There’s just there are certain things that were better last time as far as negatives I can get into there’s a sequence leading towards the third act, where Peter gets bounced back and forth on a train to this location and it just felt so quick and rushed and they tried to mask the fact that it made like 0 sense with comedy.

Whenever this movie has a plot point that doesn’t really work. And that feels like they’re going out on a limb. They try to make it funny, so you forget about the fact that it doesn’t make any sense.

That happens a few times in this movie actually. And once you start to notice that, it’s hard to see it. It just keeps happening a lot, but the comedy does work. And it did it’s one of those things where you just see you’re enjoying the movie so much, that you kind of just roll with it and let it slide.

And just like with homecoming, I could have used a little more action, just slightly higher stakes. But I’m okay with this being like a more small skilled movie of course. Obviously, I don’t need every movie to be like their universe gonna explode.

And this movie does have a scene. That I mean I just got so excited.

I’m gonna give Spider-Man: Far from Home Movie a B-plus. 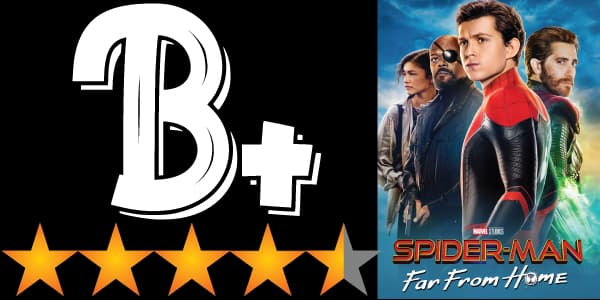 This was a good sequel. I had a good time with it and I can’t wait to see what else they do with Tom Holland and spiderman.

I’m really happy that they’re taking this character in directions that I love and there’s an aspect of it feels fresh too. Because it’s not in New York City the whole movie and so it’s like there’s new stuff to do. I had a good time watching this movie.I’m excited for you guys to see it.

Thank you so much for reading my Spider-Man: Far from Home Movie review. Look forward for new movie reviews. See you next time.

Check out the trailer of Spider-Man: Far from Home Movie.