Space Jam: A New Legacy 2021 is an adventure comedy animation movie created by Malcolm D. Lee. The movie is released on July 16, 2021.

It is a remake of the original Space Jam and will star LeBron James as Michael Jordan and Tessa Thompson as Monique.

In the new movie, all your favorite Looney Tunes characters are back – including Bugs Bunny and the rest of his friends. And this time they’re joined by NBA superstar LeBron James!

It’s impossible to watch Space Jam A New Legacy without comparing it to the original 1996 Space Jam Starring Michael Jordan.

The sequel which stars LeBron James as its basketball star, this time makes big strides in updating the premise for 2021, but its top priority is to pack as many of Warner Brothers characters on screen as possible in the same way Ralph wrecks the Internet did for Disney.

There’s still a surprising amount of heart in this story with the underlying message that we should all say true to ourselves and keep things fun as well.

The movie takes on the same main story ideas from the original film. An all-star player is trapped in a cartoon universe where he must play a high-stakes basketball game against a team composed of pro players.

This time, however, the stakes are more personal. After LeBron runs a foul of Warner Brothers AI program, it kidnapped him and his son Dom and traps them in the studio’s server verse. The only way out is zany basketball of course.

Learning to play for style and fun rather than sticking to the rigid fundamentals of the sport, is the lesson LeBron struggles to learn throughout the film.

When the script allows James to lean into being Looney or playing a compassionate father. He is the ultimate showman athlete, but it doesn’t do that as much as it should.

It’s harder to see his charisma pass a string of lines that are nothing more than stern motivational mantras.

Unfortunately, while the original Space Jam placed the weight of the story on the back of its human star, this more fleshed-out sequel also has an engaging supporting cast of characters that evens out LeBron’s more grounded performance.

Opposite of him is Don Cheadle as Al G. Rhythm. Now unshackled from his superhero armor and having a blast as an unhinged villain and the all-powerful King of the server verse.

The way he pits son against father with a smile on his face, manipulating their relationship all for his own gain is self-serving, yet shortsighted.

The emotional core of the story rests with Cedric Joe as Dom, who has defeated and hope written on N his face as he sorts through this complicated relationship with his father.

It’s a little hard to believe at times that LeBron wouldn’t encourage his multitalented son to be the best in anything he wanted to do, which makes him a little harder to relate to as a parent.

But the most impressive feat is how it incorporates video games as an equal form of entertainment and the visuals of the video game Space are impressive.

The worlds and characters move smoothly within these dimensions, with only a few of the Looney Tunes looking a bit off.

The background live-action characters as well that we see at the game are distracting and underwhelming.

I mean, look at these cause players. It’s a little unnerving. And yet, for all the spectacle, our old favorite Loony Tune characters who stole the show in the original are sidelined and wasted in this sequel.

Even sadness Buzzy casting as Lola Bunny gets lost when we have Dragons and the exciting Goon Squad filling every second in the server verse.

It’s disappointing that this long-awaited return to Space Jam fields is more like a Passing of the Torch than an attempt to revive and reinvigorate these classic characters for modern audiences.

Space Jam: A New Legacy gets a modern update to one of Nostalgia’s largest strongholds. Lebron James’s performance is self-deprecating and earnest, if a bit uneven, but he excels when it matters the most, especially against Don Cheadle’s chaotic villain and subject Joe’s vulnerable Dom.

The movie doesn’t shy away from being in on its own wear pedaling, using popular franchises effectively for big visual jokes, but is ultimately overindulgent to a point where our beloved Loony Tunes heroes are sidelined in what should have been able big comeback.

However, the central story about a father and son cuts through the excess, giving Space Jam a heart and a message that encourages staying true to oneself in pursuit of passion. 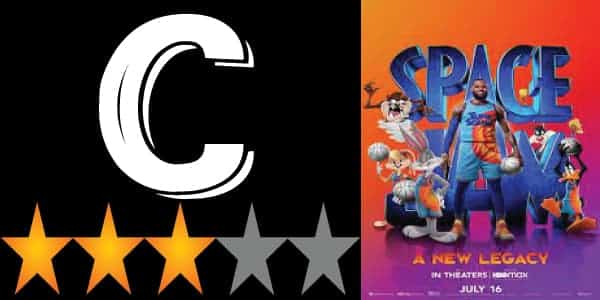 This movie was not as good as the original one in 1996, but still, it is somehow good. If you are a fan of Space Jam movies you can also check Space Jam wallpapers.

Guys thank you so much for reading the review of Space Jam: A New Legacy 2021. See you next time.

The new Space Jam trailer is finally here, and it stars basketball superstar LeBron James. Check it out.