Sound of Violence 2021 is an American Crime, Horror, Thriller film by Alex Noyer. It’s is a new twisted horror film that is a mix of saw and sound of metal.

A young deaf girl plays witness to the brutal murder of her family but finds that the visceral experience has awakened her synesthetic abilities.

It’s been a couple of months since I first saw the sound of violence at the South by Southwest Film Festival and although at the time I was really iffy on it.

It is one of the few movies from the fest that I have not been able to shake. I was so taken aback by the amount of brutal violence and devastating moments in this film that it has taken me this long to really appreciate everything that the movie has to offer. Although we still must admit it is a very flawed piece of work.

A young girl who has never been able to hear until her family is brutally murdered and the sounds of their suffering as they died brought her synesthetic abilities.

The film fast-forwards to her as a young prodigious adult pursuing a career in teaching and making music.

Alexis along with her best friend and secret crush Marie go about setting up experiments for her to create samples for her songs like The Sounds of Slapping and a BDM session.

Her hearing starts to disappear again. And in a state of panic, Alexis realizes that she needs to pursue more violent sounds like those of which she experienced at a young age, or she worries that her ability to hear will never return.

First and foremost, this is one of the coolest fucking ideas for a movie I have seen in a very long time. And although some of the time the movie is not executed perfectly, the idea is fully taken advantage of.

Nowhere’s creativity seems to be boundless here as he takes this unique premise and is able to blend ingenious kills frantic and euphoric shots and methodical sound design into a singular piece of filmmaking.

While Sound of Violence film could have easily just kept it simple and stuck with a bare-bones approach to horror, Noyer does not settle for that and is far more ambitious in his reach.

He has created a fascinating character study about a young woman grappling with unimaginable and unshakable trauma.

Savoy Brown is breathtaking in the role, balancing this gentle, well-mannered young woman’s facade with her sociopathic and relentless inner self.

I think this film is an amazing breakout for the actress as she is able to show so much range here and creates a pretty iconic character.

Though I am a bit worried I will see Alexis in every one of her future performances. What doesn’t work as well in the piece is when he tries to balance these conflicting tomes. We have these over-the-top horrifying kills, which I will get to in a second. And then the emotional core of the character study and Alexis’s relationship with Marie.

There are moments when Sound of Violence takes itself so seriously as it gets into the twisted psyche of our lead antihero. And then the next moment we have a ridiculous and unrealistic kill. And then out of nowhere, the movie becomes a Hard-Boiled detective procedural.

So as an audience member, you start to feel like you don’t know how to feel. There were times in this film that I started laughing from feeling uncomfortable or cringing because of the whiplash of tonal shifts.

It is a flaw that really hinders Sound of Violence and makes me wish that Alex Noyer had made this project after a bit more experience in the field.

But where the film truly excels is in its over-the-top sequences of torture and terror. Many of which you will never be able to unsee.

If Noyer had stuck with this only even though it may have been a little bit less of an ambitious project, it might have succeeded more.

Because what he was able to accomplish in the saw-like moments will truly make forehands rejoice. Because this is some messed-up shit, especially a kill that involves a heart.

I honestly never want to see that instrument again. It hasn’t been since James Wan and Lewyn Nell’s original film that I felt like the creativity of the kills were boundless and the way in which they are married here with the sound design is a feat of true bravura filmmaking.

Regrettably, the last few seconds of the movie did not work for me at all or makes sense in the framework of the film as a whole, and it really made me a desire for a different ending to the film.

I am really curious to see what others think. So please sound off in the comments down below to tell me what you think. Just make sure to put a spoiler heading at the top all the same. I promise you, you have not seen anything quite like this before. 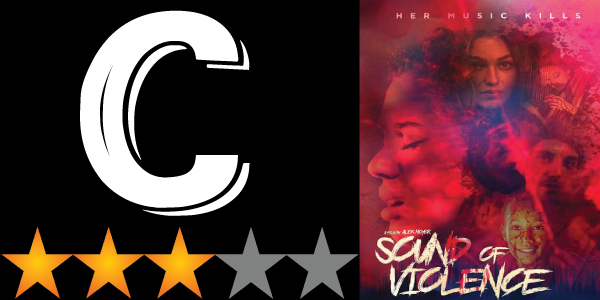 This film is a brutal, overwhelming experience that falters because of its over-ambition and mishandling of tonal shifts, as well as an ending that just didn’t work for me. But even so, its sheer vision and creativity make it a pretty unforgettable film that you will not be able to shake.

Guys thank you so much for reading the review of the new  Crime, Horror, Thriller film, Sound of Violence 2021.

Check out the trailer of the new  Crime, Horror, Thriller film, Sound of Violence 2021.