This action thriller is a G.I. Joe spin-off centered around the character of Snake Eyes. that we’ve seen before in the franchise.

Upon arrival in Japan, the RSSI Kaji teaches Snake Eyes the ways of the Ninja Warrior, but when secrets from his past are revealed, his honor and allegiance will be tested.

Critics had scored this film actually fairly low, but I enjoyed it. There were a lot of things I really liked about this movie.

The first time Henry Golding really got on my radar was when he started as the leading romantic man in the movie crazy rich Asians.

Then I saw him in another rom-com called Last Christmas back in 2019 and then kind of as a gentleman, a wealthy gentleman in a simple favor, all really entertaining movies, but I kind of thought, okay, that’s what he does.

He absolutely proves himself as a skilled, believable action hero in this movie. He’s actually from Malaysia and got his start as the host of a travel show on TV there.

The original Snakes character was actually Caucasian in the comic books, but I love Henry Golding in this role. This is clearly Henry Golden’s big breakout movie where he proves he is a star to be reckoned with. I’m so happy for him.

I thought there are a lot of really cool transitions. I mean, the whole movie is just cool, I think. I’ve actually been to the Imperial Palace that’s featured in this film.

It’s ridiculously beautiful outside and inside. What a great movie set for a movie, but especially because it’s actually a real location.

Japan itself is the perfect location to film fantasy elements. It’s just beautiful the whole country. I’ve only been there once, but I definitely would love to go back again because I didn’t have time to see everything. And I was so impressed with what I did see. Such a lovely country and the people there were so amazing.

But because of Japan, there’s some gorgeous cinematography, beautiful set pieces that are just magical. There are a few times where characters are just walking through this area, and I’m like, that’s gorgeous. It’s just stunning what you see in many of the scenes.

The first challenge that Snake Eyes had to accomplish to prove his honor, and his work was with these water bowls. And it was Super entertaining, with a very lovely end of scene, very fun Ninja training sequence. The title gets its name from a sinister role of Dice, as well as actual snakes.

There are some visual and spoken humor that the audience loved every time. And then there are these electric motorcycles that are showcased in the film that are just slick and cool and Super Japanese.

They were very cool, just the way that they sounded really good. Sound design. I thought about the movie. Keep watching during the end credits for several teasers that lead into the G.I. Joe franchise.

So with all of that praise, there were a few things that I didn’t like or thought could have been done better. For example, I don’t know anyone who has been talking about the G.I. Joe franchise lately. Nor asked for this origin story, but here we are.

Clearly, they’re trying to reboot it and get some excitement and some action hero movie spinoffs that’ll certainly sell more G.I. Joe toys.

There are two sexy, beautiful actresses, or Úrsula Corberó and Samara Weaving, and they’re illustrated in the movie posters that I’ve seen. And even in the trailer, if they’re really only in a few short scenes. They’re okay, but we didn’t really get to see their full talent. Joe cased.

The movie itself is pretty predictable, but it’s still a very fun ride. So if you watch the trailer and you think it looks really dumb, then don’t watch the movie because you’re probably not going to like it. It’s basically what you see in the trailer.

But if you think the trailer looks cool, then I think you will like the film, and there are going to be some really fun surprises that aren’t shown in the trailer.

Unfortunately, the final battle gets really messy. Some people even say a little confusing, but again, the resolution is pretty predictable.

There is a lot of violence with blood. Some people die violent, brutal death. Japanese is sometimes spoken with kind of these cool graphic, comic book style subtitles.

So I thought that that was kind of a fun element. Some of the themes that are illustrated well in the movie are respect and honor, revenge, the futility of revenge, family loyalty, the meaning of home, and trust.

So I am going to give Snake Eyes movie (Snake Eyes: G.I. Joe Origins) B-Minus. 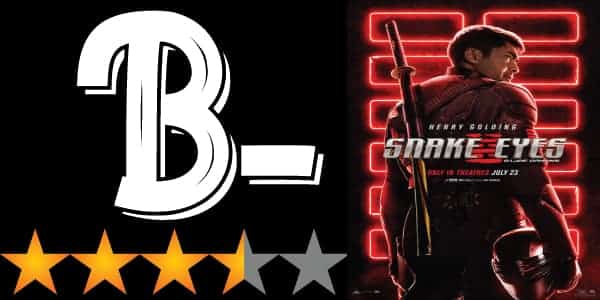 Guys thank you so much as always for reading the review of the new Snake Eyes movie. See you next time.

Check out the trailer of the new Action-Adventure and Fantasy film “Snake Eyes Movie”.