Siccin 6 is one of the scariest horror films. This Turkish horror movie is really creepy and it might cause you bad nightmares. This horror movie is on Netflix now, But should you add it to your list?

Siccin 6 horror movie is the sixth movie of the horror series of the same name,  written and directed by  Alper Mestçi. It stars Merve Ates, Adnan Koç, and Dilara Büyükbayraktar.

A girl is haunted by an evil spirit in her family home. Several bad things begin to happen around her house and to her family members. An old character rises back and tries to save the family from their doomed fate.

The young man named Orhan, played by Adnan Koç, lost his wife, whom he was very passionate about, at a young age and could not get over the trauma of it.

For this reason, he almost made a satanic deal and wanted his lost wife to come back from the ‘dead land’.  Although he gave up on the satanic deal and he repented, the evil spirit, who had let go, haunts a family, especially the eldest child of the family, Efsun. Now both Efsun and all members of her family are in danger.

Gin-themed horror movies usually try to create a frightening atmosphere by choosing stone houses in the countryside as venues and filling them with items that usually look stylish but uncanny.

However, the ‘jinn’ and ‘curse’ generally born in the secluded, dirty, and dark places on the coast.

The director actually breaks this rule a bit in this film and does not use the most outdated and bad places for the areas where the curse was born, as in his previous films.

Alper Mestçi has shot his new movie in Nevşehir, Aksaray, and Ürgüp. Preferring the open air in some scenes and the final sequence, trying to add a novelty in his own way.

So Mestçi has used new places this time to give us a really scary movie. Actually, it was not that scary for me because I could guess what is going to happen next.

But to be honest I like this kind of movies when characters are in hopeless situations with no easy way out. These are my best ones.

It keeps you thinking how they will get out of this. And it creates engagement and let you think with them for a solution for their problem.

The best horror movies are the ones that grab you into the movie and scary you like a hill.  Because that’s why you are watching them, to get scared.

One of the scariest scenes of this movie is the walking-talking babies. I couldn’t stop thinking about that scene. And the cinematography is the best in this Turkish horror film.

The actors did a really good job in this movie. They let you feel as if it was really.  Also, I have liked the visual effects in the movie except for the loud sounds effects that you feel like you are losing your ears.

I would like to point out that in addition to the good “acting performance” and wonderful “visual effects” and “plastic make-ups” in the first five films of this movie series, the “suffocating atmosphere” created by the accuracy of the location choices is also impressive.

Siccin 6 is a really good movie but I have liked  Siccin 3 and Siccin 4 more. This movie reminds me of The Conjuring movie and I thought it was going to be like The Unholy 2021, but I was wrong.

So I am going to give Siccin 6 horror film a B. 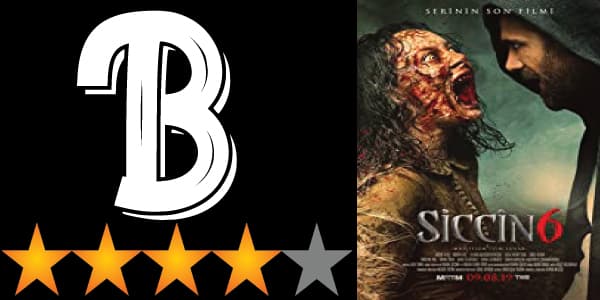 Siccin 6 is a really scary movie and it is so creepy. So you have to make sure when you watch to watch it during daylight hours. Especially those with a nervous disposition should avoid it.

You can watch Siccin 6 now on Netflix, so if you got the chance to watch it, comment below with your own thoughts about the movie.

Guys thank you so much as always for reading the review of Siccin 6 film. See you next time with another movie review.

Check out the trailer of the new horror movie Siccin 6.