Check out the Review of the new American horror film, Separation 2021 by William Brent Bell.

This film tells a story of a young girl who finds solace in her artist father and the ghost of her dead mother.

So where to start with separation 2021 film? I can tell you this much. It is probably William Brent Bell’s best film to date, but that is not saying much.

I think the plot of the film actually has a really great hook and is a creative spin on this kind of ghost story.

The writers have taken a devastating event in a child’s life, the separation or divorce of their parents, and wrapped it up in a horror tale with ghosts and ghouls. Though I must add, not very neatly.

Maggie and Jeff have been fighting nonstop, mostly about his inability to hold a job. He is a struggling artist that can’t let go of characters that he created long ago and at one time was creating a puppet show surrounding them.

while Jeff hides away scribbling drawings at home, Maggie has been working for her father and never gets time for their daughter, Jenny.

One day Maggie comes home and Jenny has taken a nasty fall under the watch of Jeff and their babysitter, Samantha. Maggie decides enough is enough, so she takes Jenny and files for divorce and full custody.

During the legal battle, Maggie is tragically killed and so Jenny moves back in with her father. Once this happens, Maggie’s dad, played by Brian Cox, comes into the picture to try and gain custody of the girl, all the while accusing Jeff of being involved in the murder.

Of course, this is a horror film. So Jeff’s creations start coming to life and haunting the family. And he begins to suspect that it is Maggie’s vengeful ghost that is causing the chaos.

What works most about this movie that I find is absent from most mainstream horror is that I actually cared about Jeff and Jenny.

Although I’m still not completely sold on Rupert’s friend as a performer, his character is carefully drawn and given time to really be fleshed out.

You totally understand what kind of man he is lost in the past and his imagination, but he truly loves his daughter and wants to be the best father he can be for her.

This custody battle and his new job are taking a toll on him. And even though his parenting skills are not the best, you root for him every step of the way to keep his daughter.

I also really appreciated that in Jeff’s new job, he has been tasked in creating this dark and insidious character for a comic.

And as he has pushed to keep looking within himself for inspiration and to make his artwork bleaker, the world around him reflects this.

But here’s where we have to start talking about the negatives. And there are plenty.

It’s almost as if the creators of the film had all of this really cool, creepy artwork. And then they came up with this story about divorce and tried to shoehorn these characters into it.

Because all of the moments with these frightening ghouls feel so forced. Even though I must admit the freaky imagery here is super effective and I definitely was creeped out by separation. The filmmakers just plop moments haphazardly throughout the movie with absolutely no buildup.

They don’t understand that the most frightening moments in cinema have to be earned. Just because you have some freaky-as-hell designs doesn’t mean that the scene with them is going to automatically be scary. You have to work for it and this movie does not.

I also think that separation 2021 movie is really predictable. And I guess the twist at the end, pretty much the moment I knew they were building up for a twist.

I do like how all of it worked out and how they tied all of it together, but holy crap did this movie’s production values fall apart during the finale.

All of a sudden they are using wack green-screen effects, horrible lighting, and some CGI that looks like it came from a late 90s movie.

I honestly was shocked at how shoddily put together this was and that they are going ahead and releasing it this way.

I wish they would have spent a little more money and time in post-production to finish it off. Right. Because what is written in the script isn’t half bad. The execution is what kills it. 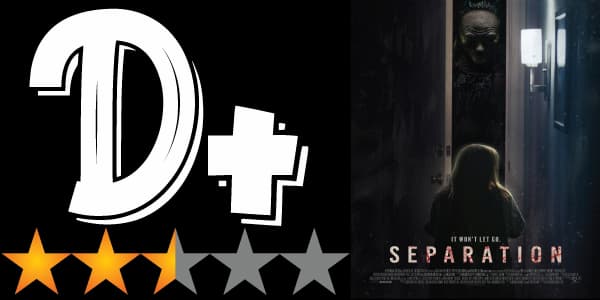 This is definitely not the worst horror film that you will see this year. And I actually think that the script has some really good character and story development.

It also has really frightening and spine-tingling imagery, but it is, unfortunately, let down with its lazy and haphazard execution.

Separation 2021 horror film will be released in theaters Friday, April 30th. So check it out and tell me what you think about it in the comments below.

Guys thank you so much for reading the review of the new horror film Separation 2021. See you next time.

Check out the trailer of the new horror film Separation 2021.

Summary  of The Film:

8-year-old Jenny (Violet McGraw) is constantly caught in the middle of the feuding between her lawyer mother Maggie (Mamie Gummer) and artist father Jeff (Rupert Friend). She leads a lonely but imaginative life, surrounded by puppets called “Grisly Kin”, which are based on the works of her father. When Maggie is tragically killed in a hit-and-run, Jeff and Jenny try to piece together a new life. But when Maggie’s father (Brian Cox) sues for custody, and babysitter Samantha (Madeline Brewer) tries to be the new woman of the house, life in their Brooklyn townhome takes a dark turn. The puppets and frightening characters come to life and Jenny is the only person who can see them. When the motives of the ghoulish creatures become clear, the lives of everyone are put very much in jeopardy.