Riders of Justice 2021  Danish film that does struggle to validate its shift from revenge drama to dark comedy.

Explore the Adventures of the Riders of Justice

Hello, everyone,  it has been such a long time since I have seen something so unique, so very much its own thing, that you feel fully transported into the writer-directors mind. And when you were in Anders Thomas Jensen’s mind, all bets are off. There are no rules and you must submit yourself to that. So let’s talk about the new Danish film Riders of Justice.

Markus, a deployed military man, has to go home to his teenage daughter Mathilde when his wife dies in a tragic accident. It seems to be plain bad luck, but it turns out that it might have been a carefully orchestrated assassination, one which his wife ended up being a random casualty of.

Going into this film, all I was truly prepared for was another fantastic Mads Mikkelsen performance. And of course, as always he delivers.

But Riders of Justice film is such an insane experience that I really felt like my emotions and feelings were on a roller coaster ride. Now that at times can be a really good thing, but unfortunately a bad thing as well.

The tonal shifts in Riders of Justice movie are so jarring that I do have a feeling that some people are just going to flat out hate this movie because of that.

The movie almost starts out like a Christmas fable. And then about 15 minutes into the film, there’s something that happens that is so shocking that it almost reminded me of that scene from hereditary.

My jaw completely hit the floor and I’m pretty sure that my brain had a meltdown for a second. The film then shifts into a dramatic tone about a family dealing with grief and then into a bleak revenge tale.

And now, if that wasn’t enough for you, we get introduced to a team of bumbling idiots who add this mix of black comedy and screwball Dumb and Dumber humor and finally throw in some brutal action to top it all off.

The movie juggles all of these things, all the while wrapped up in the package of a fable conveying morals of regret, finding peace and comfort in the things that you do have in life, and then paying it forward.

None of this should have ever worked, but shockingly most of it does. Jensen’s screenplay is able to find the heart buried deep within this mishmash of genres and ideas. And that heart is what Ade’s us in crossing the finish line.

All of the performers here are outstanding, and that is a feat in and out of itself because there are many. If you have seen the most recent Michelle Pfeiffer movie French Exit, these two reminded me a lot of each other because both are dealing with a very troubled cast of characters that all have a multitude of issues who are nothing alike but come together to form this oddball sort of family that brings about this form of healing.

The two standouts here are definitely Mads Mikkelsen and Nikolaj Lie Kaas and understandably so, because both of these actors have worked with Anders on numerous other films and they seem to have a deep understanding of this writer-director and how to tackle his material. But really, this whole cast is just excellent.

For me. What keeps Riders of Justice film from being an all-out masterpiece, going back to the tonal shifts is the humor.

Everything works so well. These moments of emotional impact hit so hard that when this inappropriate and crass humor pops up out of nowhere, it almost takes away from the film being as affecting as it should be.

That’s not to mean that the comedy falls flat at all because I burst out laughing multiple times throughout this movie.

But it almost takes us to a place where the messages and themes of the film are being made light of by its creator when they should have been embraced and championed by him.

So I am going to give Riders of Justice 2021 Danish film a C-plus. 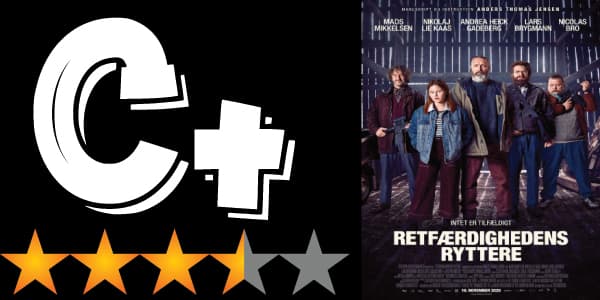 All the Riders of Justice does struggle to validate its shift from revenge drama to dark comedy. It nonetheless is a one of a kind hard-hitting and heartfelt little gem that has a plethora of unique gifts to provide its audience.

Thank you so much everyone for reading the review of Riders of Justice 2021 film. I will see you soon.

Act of revenge devised by grumpy widower (Mads Mikkelsen) gets out of hand – with therapeutic consequences. Bittersweet, absurdist tragicomedy. Check out the Riders of Justice 2021 film trailer.