Erica, who ends up as the entertainment at her ex-fiancé’s wedding after reluctantly taking a gig at a luxurious island resort while in the wake of a music career meltdown.

This is a romantic comedy about aspiring pop star Erica, who’s played by Christina Milian, who ends up as the entertainment at her ex-fiancé’s wedding after reluctantly taking a gig at a luxurious Mauricio’s island resort while in the wake of a music career meltdown.

So she tries to keep their past relationship a secret from his new fiance soon to be wife. But she rediscovers feelings for her ex, who is played by Saturday Night Live comedian Jay Pharoah, despite his brother Caleb’s attempts to keep them from falling back in love, and his brother is played by Sinqua Walls.

So in this warm and fun romantic story that explores the bonds of love and family, the question soon becomes, Will Erica, sing at her ex-fiance’s wedding or her own.

There are a lot of things I really liked about this movie. I think I was in the mood for a rom-com when I watched it.

So first off, Christina Milian is fantastic in this role. I got the biggest kick out of her. She has some pretty decent acting chops and, of course, an incredible voice. She’s beautiful and funny and instantly likable as this character. I’m a fan.

There’s a great soundtrack to this film, thanks to Christina Milian, who sings quite a bit in the movie. And so I thought that was really great.

As I mentioned, Saturday Night Live comedian Jay Pharoah has made it as a leading man in a rom-com. So good on him.

We know he can make us laugh, but in this movie, we also learned that he could make us cry and feel all the feelings. So good on him for that, too.

About Sinqua Walls. I think women are gonna be swooning all over the country when they see him in his many shirtless scenes.

I didn’t remember seeing him in anything before, so I actually looked up his bio online, and it turns out I actually have seen him before.

He’s been in a ton of TV shows that I’ve never watched, except I have seen him play Sir Lancelot in the popular TV show called Once Upon a Time aired on ABC and I’ve seen all of the seasons of that TV show, so I definitely remember him in that role.

And in fact, that is one of the very few performances ever that Sir Lancelot has been played by a black American on TV. So good on him, too.

I like the fact that none of the characters have it all figured out. And when I say it, I mean life and romance. And so in that regard, it made the character seem like real people.

Sometimes in movies like this, they’re filled with cliche characters that are over-exaggerated to the point that they’re almost like cartoons.

And there’s a little tiny bit of that with just a few little characters in this movie. But overall, I felt like the people were real people that you would actually meet on the Street and talk to. And so I really like that aspect of it.

So Mauritius is now on my bucket list radar. I don’t know anyone personally who’s ever been there, but this movie definitely has me sold on going there.

The Paradise Island looks absolutely gorgeous, and the movie definitely has a tropical vacation vibe. It’s actually located in the Indian Ocean and recently captured the world’s attention by showing pictures and videos of this thing that looks like an underwater waterfall.

You might have seen that on the Internet or on YouTube or something like that. It’s an illusion because it’s actually sand and silt that are constantly in motion.

And so it makes it look like there’s a waterfall falling into the ocean from the ocean. It’s actually super cool. Look it up.

There’s a peak on the island that’s actually been designated as a UNESCO World Heritage Site. And okay, I’ll stop talking about it and book my ticket there already.

The title of this movie is perfect. Also, resort to Love Double on Tundra and the whole deal. If you like Hallmark Romcoms, you’re definitely going to enjoy this.

Other than a lot of outfits that show off a lot of cleavage, there’s really nothing objectionable about the movie. It’s just sweet, romantic, and a comedy. So there you have it.

All right. Now, all that being said, There were just a few things that I didn’t like or thought could have been handled better.

First of all, there are a few times when the lip-sync doesn’t quite match up when Christina Milian is singing.

But I forgive this error because she has such a beautiful voice, and I was just mesmerized by her singing. But it is mostly noticeable in the very last few scenes, which kind of surprised me about whatever.

As soon as you see that handsome scene qua walls on the screen, you pretty much know exactly what’s gonna happen. So there’s no big surprise.

There’s no big twist. It’s pretty straightforward. And admittedly, the story and the dialogue are Super cheesy.

Who cares. It was just still fun to pretend I was on a tropical island vacation for an hour and 42 minutes.

So that was it. That’s all I could think of that I didn’t like. I mean, it’s predictable and cliche, but I still enjoyed it.

This is an adult-talking romance movie. And as I mentioned, there’s so much cleavage, there’s no pre-profanity. So I always appreciate that.

And I also appreciated the fact that we didn’t have to watch a bunch of bikini-clad people goes bed-hopping, which is often the case. And what happens in movies like this. So really it’s very sweet and clean, I think.

Several characters don’t know what they’re going to do with their lives. And so that aspect of the movie also felt very real.

So I am going to give Resort to Love movie a B-Minus. 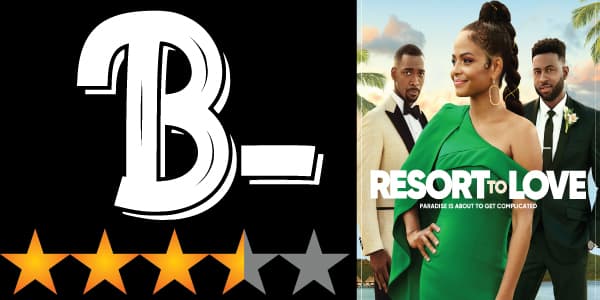 Guys thank you so much as always for reading the review of Resort to Love movie.

Check out the trailer of the new romance, comedy film “Resort to Love movie 2021”.