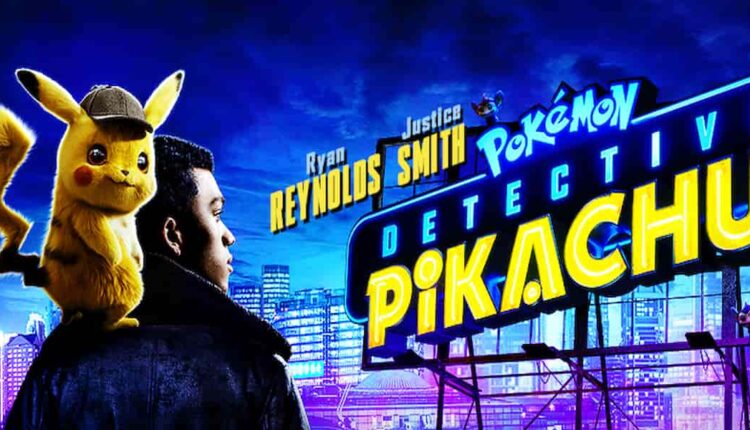 Pokémon Detective Pikachu is a delight for fans to see how immersive this world actually feels.

Pokémon Detective Pikachu 2019 film stars Ryan Reynolds as the voice of Pikachu and Justice Smith as the son of a detective that’s recently gone missing in Rhim City.

And Tim, played by Smith, goes to Rhyme City to search for his missing father with the help of a Pikachu that for some reason is able to understand everything Tim says and he can understand, Pikachu is saying.

So they embark on a mystery to discover what happened to Tim’s father and figure out why Pikachu and him can understand each other.

The fact that we are now in twenty nineteen at a point where there’s a live-action Pokemon movie and we’ve had Ghost in the Shell and Elita Battle Angel and all this craziness.

Now Pokémon to me has always been more of an anime because I was never as interested in the games as some people.

I know that technically this is actually a video game movie, even though Pokemon is just as famous as an anime as well as a card game.

It’s a gigantic media conglomerate thing. Pokemon is. It’s been huge ever since I was a little kid on the school bus and people were fighting over Pokemon cards like they were one hundred dollar bills.

I like this franchise. I have a soft spot for it, but I’ve never been a diehard fan, you know what I mean?

Like, last year I did go to see the power of us in theaters just for fun. I didn’t even review it. I just watched it purely for fun, like I was excited to see this movie. And I was really hoping that it wouldn’t be awful.

Thank God it’s not awful. This is an entertaining film and that’s really all I wanted out of it, because of the source material. It ain’t Shakespeare.

For me, Pokémon was never about a story filled with depth and nuanced emotion.

It’s just Pokémon like their cool little things, and you can collect them and it’s fun. And their major themes of Pokemon were hope and believing in yourself.

And little kids can watch it and be entertained by it and also learn valuable lessons across every episode. It was never meant to be this incredible story. And so I was just hoping the film would be entertaining and it was.

The best part easily of this movie is Ryan Reynolds. As Pikachu, he provides all of the best humor as Pikachu.

The character is also the most entertaining in the film. Whenever you see it fights the things that Pikachu does in the movie. Really, really cool stuff. I mean, it’s kind of what I wanted to see.

And Rhim City felt lived in it felt like a place. I love the idea of Pokemon and humans interacting in this place and working together.

You saw Squirtle putting out fires and just you could see like the practical application of every Pokemon in the city. So they did their best to try to make it make some sense as well.

The movie also tugs at the heartstrings fairly successfully in a few places where I didn’t expect to be wrapped up in the story.

The action sequences, whenever Pokemon are battling or anything else is going on that involves Pokemon doing cool shit, a lot of fun.

Rob Letterman directed this. He also made the first Goosebumps movie, so he’s now had two properties from the 90s. He’s been able to adapt to the big screen and he’s done a fairly consistent job with both of them. I can’t really complain.

I played a lot of the three DS games. I didn’t play the whole thing. There are certain parts of this film that are similar to the game, some choices that are made in the movie in regards to the order in which things happen. That’s also similar to the game. And I like that they were at least attempting to sort of wink to the fans of the game.

You can tell that the people behind the movie actually did kind of give a shit about the fan base and didn’t just want to cash in on the fan base like some previous adaptations of things. You can really tell that they actually gave a shit and they tried to make a movie that the fans could enjoy.

Still, this is by no means a flawless movie. If you really want to get nit-picky about the Pokemon film, which I’m going to. It’s really stupid, the human characters suck all of them.

I did not care about a single one of them. In fact, there were times when I looked at the main character played by Justice Smith, and I went, get over it, dude. Just get over yourself, man. You are a wet blanket. You are annoying and boring. You need to stop being this way.

And it’s not entirely Justice Smith, the actor. It’s the way the character is written, because Pokémon to me was always this very hopeful experience where you can just relax and watch it and have a good time.

But the first 20 minutes of this movie are legitimately sad and actually more beyond that. Really, it’s kind of depressing.

Because it’s not just about the fact that this kid doesn’t know where his dad is or thinks maybe his dad could be dead. He kind of doesn’t care. And so I get that that’s part of his arc. You’re supposed to show a character in one place and have it end in another place. Totally get that.

It’s just that a large majority of this movie, our lead character, doesn’t give a shit, which kind of makes us not give a shit, you know what I mean.

He starts caring a little more when he runs into an intern for a news company played by Catherine Newton. And she’s interested in this story of this missing detective. And he obviously thinks, oh, she’s kind of cute. And so now all of a sudden he wants to be on this mission. And Pikachu is over there like aH!.

There’s a lot of humor there, which easily saves the whole movie. Whenever it goes back to the human characters, though, I’m like, geez, these guys are underwritten and I just don’t care.

The Pokemon are the stars of this movie by far. And to be honest, that’s kind of what Pokemon’s about You don’t necessarily watch the show because you really love Ash Ketchum.

There weren’t enough Pokemon battles. I would have loved more of that. There wasn’t a lot of catching Pokemon either. There was really just one scene, actually.

Besides that, it’s a very different film from what you might expect if you are a fan of Pokemon, it’s more so an investigation movie. But when they do find information for their case, it’s sort of just thrown on them by these expositional holograms that tell stories. And it just felt so easy like it didn’t really feel like they were uncovering anything.

So in summary, the human characters are flat and boring, but the movie was entertaining and consistently funny because of Ryan Reynolds as Pikachu.

He saved the entire film and gratefully, there’s a lot of him and they seem to understand the core of what Pokemon is about and they’re able to communicate that as best as they can in this movie.

It’s about as good as a live-action Pokemon film could be, although if they do make more, I would like them to focus more on people hunting for Pokemon, battling with Pokemon tournaments, things like that.

I’m going to give Pokémon Detective Pikachu a B-minus.

Well, guys, if you see Pokemon, Detective Pikachu this weekend, let me know what you thought of it. Don’t expect much out of it. It’s about as good as it could be. It’s funny. And they did a pretty good job with recreating Pokemon for the big screen.

Guys, thank you so much, as always, for watching. Look forward to more reviews very soon.