Plan B is a new teen Comedy film coming out next week on Hulu by Natalie Morales. It is much in the same vein as films like Book Smart 2019 movie and Unpregnant 2020 film.

And now we get two leading ladies who set off on a wild adventure and endure wacky and raunchy events that lead to them learning life lessons. As a huge fan of both of those movies I mentioned, I had high expectations for Plan B.

The film follows a straight-laced high school student and her slacker best friend who, after a regrettable first sexual encounter, have 24 hours to hunt down a Plan B pill in America’s heartland.

If you have seen either Book Smart and Unpregnant, you have pretty much already seen who loses Plan B too.

It is an unfortunate fact about this film that it shares nearly the same DNA as both of those hilarious comedies because I was hoping for something fresh and new, even though the plots were very similar.

Luckily, our two leads are absolutely fantastic and the film can be gut-busting funny, or else this would have been a bit of a disaster.

We follow Sunny, a South Asian young woman whose mother expects her to be a perfectly good girl in every way and she has reached that time in her life when she is ready to rumble.

So her best friend, Lupe, who has already reached her rebellious stage and is looked at with concern by her religious Hispanic family, convinces her to throw a house party while their son decides to lose her virginity and wakes up the next morning dead set on getting the Plan B pill, but is denied by the pharmacist.

So her and Lupe steal her mother’s van and set off on a road trip to the nearest Planned Parenthood. And, of course, hilarity ensues.

I was almost immediately sold by Kuhoo Verma and Victoria Moroles as our two leads. Their comedic timing, a servant with screen presence, and the chemistry between the two of them were all on point.

Basically, you could say that these two performers were firing on all cylinders and that really helped elevate this material.

Also, there are some supporting terms here that are so wonderful and outrageous. The big stand out for me being Edi Patterson as a convenience store clerk named Doris, who doesn’t take shit from anyone.

The film plays out like most of these teen comedies as we keep running into a slew of progressively more ridiculous and zany characters. And for the most part, these run-ins all tend to end up garnering laughs rather than falling flat.

But please keep in mind, I said, for the most part, there are a couple of moments like one with a piercing in a precarious place that feels so out of the left field and really our lowest hanging fruit type humor.

But I kind of always go into these raunchy teen comedies expecting a few moments of shock humor. So I wasn’t surprised they tried to go there.

Natalie Morales directed the film and like  Olivia Wilde with Book Smart, she is mostly known as an actress. It shows like Parks and Recreation and Dead to Me, who is now throwing herself in the director’s chair.

She also has another film that she helmed that premiered at South by Southwest this year called Language Lessons.

And what I’ve heard through the grapevine is that people were really impressed with what she did with that bare-bones film.

Unfortunately, I didn’t see any inspired directing and Plan B from Morales, but I am still looking forward to seeing what she does in her other film.

Olivia Wilde brought a polished, exuberant, and inventive eye to her debut feature book Smarts. Whereas Natalie Morales just feels like she’s playing it really safe with her style here.

And I really wish that she had taken advantage of those things about this film because then it would have been something really different and special.

She also said this about Plan B. It’s a typical teen quest movie and that I would agree with wholeheartedly. It’s typical. There’s nothing new or fresh here, but there is some weird fun and belly laughs to be had.

And there is also a sweetness to the film by the end that left me with a big smile on my face, especially with a lesson that people in your life, including your parents, might really surprise you if you give them a chance and open up to them.

At the end of the day Plan B isn’t going to change the game, and it’s definitely not A must see, but it is a fun little comedy that will make you laugh and is probably best suited to be put on during a sleepover or a movie night with friends.

So I will be giving Plan B film a C-Minus. 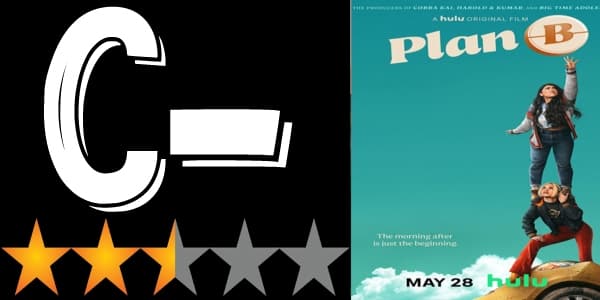 This new teen comedy feels so familiar and formulaic that you might have a hard time getting past the fact that you’ve seen it all before.

But it’s two leading ladies and the amount of humor that Lance makes it an enjoyable album, completely forgettable experience.

Plan B will be streaming on Hulu next Friday, May 28th.

Guys thank you so much for reading the review of Plan B 2021 Movie. See you next time.

Check out the trailer of the new comedy film, Plan B 2021.