Pig Movie 2021 is a drama, thriller film that is going to be available in theaters on Friday, July 16th.

A truffle hunter who lives alone in the Oregonian wilderness must return to his past in Portland in search of his beloved foraging pig after she is kidnapped.

Nicolas Cage has made a name for himself, especially over the past decade, for taking on roles in low-budget B movies that all range wildly in quality.

Most of the time, these films are just plain awful, but sporadically. He appears in a hidden gem that allows him to let loose and unleash his inner crazy Cage.

When I saw the mysterious trailer for Pig movie, I thought this would definitely be one of those films, especially with him uttering the line, I’m looking for a truffle pig.

I thought we were going to be getting another Gonzo film with an Overthetop crazy Cage performance in the vein of Willy’s Wonderland and Mandy at one that was a little bit more grounded in reality.

And honestly, that couldn’t be farther from the reality of what Pig actually provides, which is an introspective, meditative drama on grief, and some people are going to be highly disappointed and turned off by that. Me on the other hand, I just about loved it.

The film follows a mountain hermit named Rob who lives a humble life in the Oregonian wilderness in a small cabin with just his pig by his side.

To make a small income, he has trained his pig to Hunt for truffles, and he sells the rare delicacy to a local vendor named A Mirror.

One night, the man is attacked in his cabin and his beloved pig, his only companion in the world, is taken from him.

He contacts a mere who begrudgingly joins him to track down the truffle pig in Portland Cd’s Fine Dining Underground.

I’m going to do my best and keep this review as vague as possible because going into this film fresh is the best way to do it.

The trailer did a fantastic job of not giving too much away, which is rare nowadays, so I will also try to do the same.

Pig movie is going to have a hell of a time catching on because I have a feeling that many fans of Nicolas Cage’s most recent work are going to completely disregard this film as pretentious garbage.

This is not the Cage we have been accustomed to seeing as of late, although he does give us glimpses of some of his most famous works here and there.

This is a much more fragile and restrained performance from the Academy Award-winning actor, and I also think it’s one of his best in years, maybe of all time.

He has taken this character of Rob, who is bloodied and scarred throughout nearly the entire film, and given him a heart, a heart that is struck with grief that has barred him from creating bonds with others.

But where in the past, Cage would have made Rob completely unhinged and out of control. Instead, he makes his character-wise and observant, yet still intense and unpredictable.

His self-control in this performance allows him to actually provide us with a fascinating character study. I hope that this film gets the love that it deserves so we can get more Nicolas Cage roles like this. Along with his crazy Cage ones Of course.

the filmmaking in Pig is absolutely gorgeous from first-time feature director Michael Sarnoski. This is a lyrical piece of art. It’s a mix of sound, score, and cinematography completely transports you into this world.

And his screenplay reminds me almost of a fable. I’ll be it a much more grounded one, and as such, the film does feel like it would have been perfect as a short film. Though I still admire the movie for what we forgive it.

I just can’t help but feel like Pig needed a few more jolts of energy near the end. The film certainly starts out in its first part with many moments that feel propulsive, but by its third part, it has lost most of its team.

I also feel like Michael Sarnoski could have done a better job at tying a few more story threads together to create a much more emotionally satisfying tapestry.

I kept waiting for that gut punch to occur, and it almost happened multiple times, but then the film recedes back. It really should have just gone for it.

All the same, Pig is a film that will stick with you long after it’s over. I even went back the next day and watched it all over again to let it soak and even more.

At its core, it is far simpler than it first seems, but this is a completely original film that feels so very unexpected. And when that happens in cinema, we should embrace it with open arms. 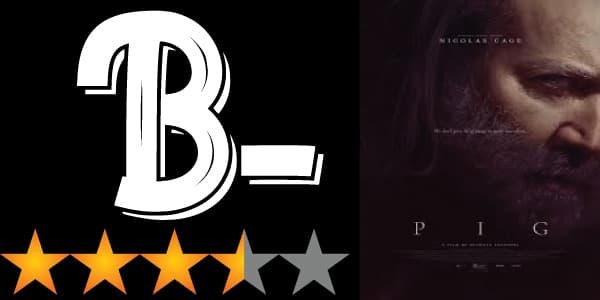 This movie is certainly not perfect, and it will disappoint many who are looking for another insane Nick Cage thriller. But the ones who open themselves up to this lyrical fable will realize that it is a three-course meal for the heart, the soul, and the mind.

Guys thank you so much as always for reading the review of Nicolas Cage Film “Pig”.