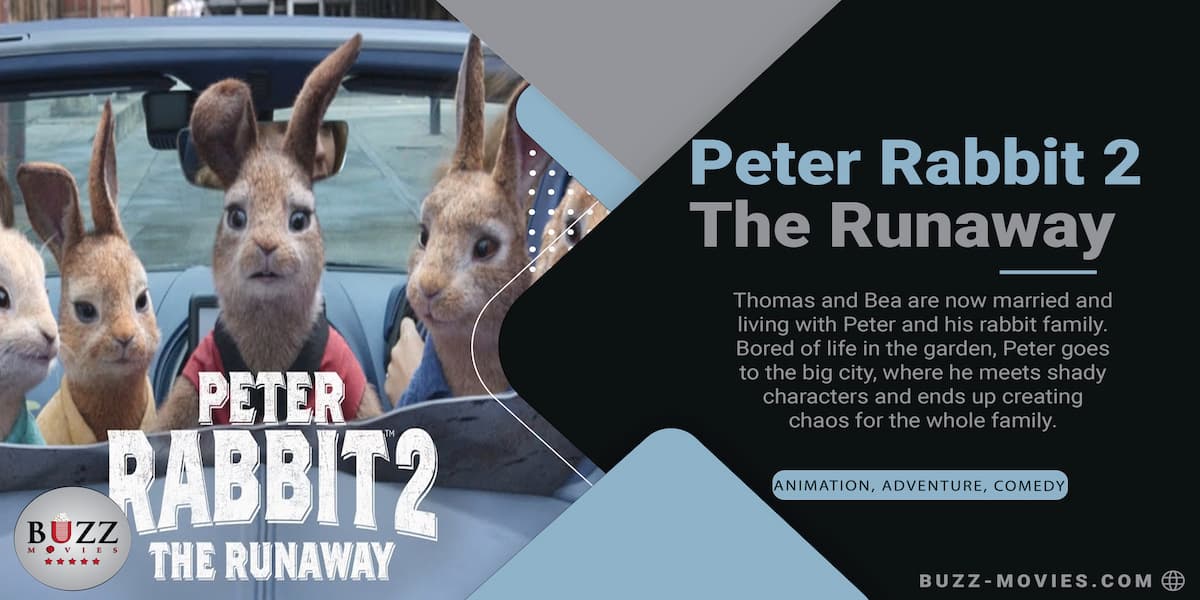 Peter Rabbit 2: The Runaway 2021   is an Animation, Adventure, Comedy film by Will Gluck. Check out its review.

Despite his efforts, Peter can’t seem to shake his reputation for mischief among the other rabbits. Once the adventures out of the garden, Peter finds himself in a world where mischief is appreciated. But soon his family come to bring him home.

I’m someone who went into the first Peter Rabbit movie expecting to absolutely hate it and walked out pleasantly surprised that it was just a fun family film that I actually personally found quite a bit of enjoyment in.

So going into this movie, the trailer is just like the first one was not very impressive. But I remember how the first one left me off and I actually thought it was just okay.

I thought it was an okay film, wasn’t insulting, wasn’t really all that bad, wasn’t boring by any means. It was just an enjoyable family film with quite a bit of heart, quite funny, just didn’t have much to it.

So I went in very optimistic for this movie. And it turns out that the same weekend that we get Godzilla versus Kong, we get a really bad family film. This is not good.

I’m someone who really wanted to enjoy this movie as I grew up with the Peter Rabbit books like I grew up reading those books and everything, and I found the first one to be an enjoyable time. That was quite surprising.

But sadly, this movie doesn’t have much to really talk about. James Corden as Peter Rabbit once again. Actually does a really good job with the voice work and so does the entire cast was what they’re provided.

They do a fine enough job with their voice acting. Margot Robbie, Daisy Ridley, as  Cottontail and Flopsy. Actually didn’t do too bad of a job.

Are that Daisy Ridley as Cottontail was actually kind of funny quite frequently whenever it was like the character on a sugar rush and everything is the bunny.  That actually led to some pretty funny sequences throughout the film.

And I can tell that these actors are really trying to work through a bunch of nothing.

Like Donald Gleason and Rose Byrne I actually thought that dynamic, the relationship building, and forming throughout the first film was one of the sweetest and most endearing things of that film.

But that entire relationship kind of just gets dropped. Yes, they’re still together. They get married very, very early on in the film, but there wasn’t much to their relationship besides,.

Hey, Rose Byrne’s character has now written a book about the rabbits. That’s about it. And now he’s like trying to look out for her from this publishing company and rather than trying to botch her idea and vision.

But it really goes nowhere. It doesn’t add to anything in the story. The pure focus on this movie is Peter Rabbit, his mischief, and how people, you know, perceive him.

Wil not perceive him, just view him as a whole. And the movie doesn’t really do a good job of capturing it because, like, it’s only like one or two things that go wrong. And then it goes off on this other tangent and everything and it tries to have this entire story in the background.

Well, it’s more or less in the forefront, but I stuff with Rose Byrne and Donald Gleason, which was the heart of the first film, and also with Peter Rabbit.

Those two characters are kind of in the background in comparison to Peter Rabbit and what he’s doing in this movie, which just isn’t very interesting or endearing, even though there is a message to be found there.

The problem with this movie is that all the messages, all the plot points in anything are just completely rushed through and everything just feels so abrupt.

There’s an opening sequence, which I won’t spoil. Why? But it is incredibly abrupt at the wedding. And I’m like, what? And I knew very early on that this movie was going to be very unevenly paced, that this is a very boring movie with not much charm to it whatsoever.

The thing is if you’re going to have a message like what they try to do in this movie, at least have an effective follow-through. But you can’t do that when you are so abrupt and don’t develop up to it.

But in saying that it’s a lot of the same stuff as last time, the jokes are very much the same. The gags, a slapstick, and everything. Very much so the same. And therefore there isn’t any originality or flair to this movie.

Therefore, the jokes also land very, very flat. I only laughed a couple times in this movie and they were really basically just chuckles. The only times where I laughed out loud was the Cottontails stuff when she was on a sugar high.

Kudos the daisy really for some really weird fucking voice sound effects. Don’t know how you would have acted through that in the recording booth. I kind of have to question that.

The VFX and the rabbits are actually really good. Like all the animals, the animals look really, really cool. But there are some stunts and everything that I’ve done this movie with a VFX is atrocious.

There’s a moment where Donald Gleason’s character is rolling down a hill and midway through he turns into a full CGI model of him and then starts going Boing, boing, boing, boing, like a fucking Looney Tunes cartoon.

And I just went like this, this feels like a cartoon. Going to do something like this with the character Peter Rabbit 2. Just do a feature-length movie. That’s a cartoon to do that.

But it fails at doing that because it’s so cartoony, but in live-action, trying to be so serious but goofy at the same time, and there are two times that they don’t know how to balance and mesh.

Overall, there really isn’t much to talk about this movie. It’s a very bland, boring movie that has now the charm of the original. Kids will watch this movie and be like, yeah, that was fun.

And this isn’t the worst movie by any means. I’m hating on a lot more than it deserves because there is something to be found for kids at least. And I can’t say I hated myself while watching it.

But it’s not as bad as I made it out to be by any means. I know I kind of bashed on this movie. But there are some good elements in there. The voice actors really do try their hardest. There is a good message to be found in this movie.

So I am going to give  Peter Rabbit 2: The Runaway a C. 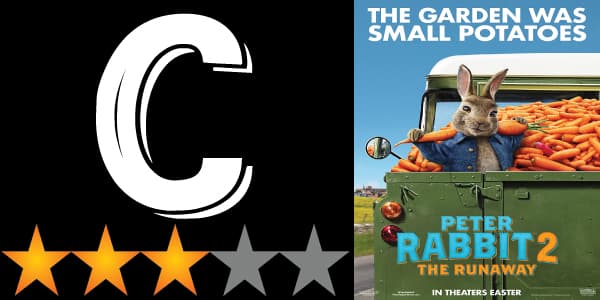 Peter Rabbit 2: The Runaway will be in theaters on Jun 10, 2021. I want to see what you guys have to say about this sequel. Down the comments section below. Did you love it? Did you hate it? Or are you somewhere right in the middle of it coming down below? Let me know.

Guys, Thank you so much for reading my review of Peter Rabbit 2: The Runaway, See you next time.

Check out the trailer of the new Animation, Adventure, Comedy movie Peter Rabbit 2: The Runaway 2021.