Parasite movie was directed by bong Joon Ho. and tells the story of a down on their luck family. That takes a special interest in a very wealthy family. Everyone in this 200family is unemployed and slowly but surely they find a way to all get jobs working for this wealthy family in very private positions, a driver, housekeeper, a tutor. And the whole time this other family has no idea that all these people are related and scamming them. But when something rather unexpected happens. It changes both of these families’ lives forever.

Movies god dammit movies are back this is such a good year for film already with a lighthouse and now parasite I feel very restored. My faith in film has returned. This is a wonderful movie and despite so many great films in his career already. Like memories of murder, the host, mother, Snowpiercer, oak Jack. This might actually be his best.

I thought this movie was virtually flawless. I loved every minute of the film. It’s extremely funny. In essence it’s a social satire because we’re watching two very different families and how they perceive things.

The characters we follow who are sort of scamming these rich people, literally live lower than the others. They live farther down in the city when there’s a rainstorm the wealthy people think it’s beautiful, but for these guys they’re thinking holy shit our whole neighborhood’s going to flood.

And where this film shines is that so much of this is told through visuals. We get this great sequence where this family is trudging through a flood trying to get back to their home. And we just have these incredible images playing out on the screen with beautiful breathtaking cinematography of the city and seeing how people from a certain area are looking at this rainstorm versus people who have to take buckets and get water out of their rooms through the window because their entire house filling with sewage.

Like in the opening sequence, the family notices that their neighborhood is being fumigated for rodents and bugs and stuff. And they leave the windows open because if all of this mess gets into their house they’ll get free fumigation. This movie is also extremely funny. It’s easily one of the funniest movies I’ve seen so far this year.

And the humor is very smart and extremely clever. And its intelligent because it respects its characters. They don’t view the wealthy characters as complete idiots. They’re not also total villains either. They don’t necessarily do anything in the film that makes you hate them. Although eventually, you begin to understand that members of this less fortunate family are starting to hate them.

And in a lot of films especially coming out of Hollywood. Less fortunate families are usually portrayed as in Brussels. And this film though there extremely smart because they have to be. They don’t have the resources of the wealthy family. They don’t have all of that and so they have to use their wits to scrounge and get money. They’re basically scavengers. And to be a scavenger you have to be really smart.

So the film wisely takes its characters and plays against type for what you would expect from them too great results. Now I’m not gonna run it for you if you haven’t seen it, but there comes a point the movie where the story shifts a little bit. It starts to get less funny and a lot more serious.

And this point in the movie is what really hooked me. It’s all very realistic and portrayed in a way that you believe. The things that are going on in this house are scary, but they’re scary because it seems plausible. You can watch the movie and you can’t really deny the possibility of something like that happening, which is why it’s a lot more frightening.

There’s also a lot of brilliant visual connective tissue throughout the film, that you can notice more in second and third viewings or maybe on the first if you’re paying close attention that tell a story. He uses very specific images and such a subtle way to make you understand everyone’s plight.

And like so many of my favorite films, this movie understands that certain things just need to be ambiguous. you don’t need to be told everything and sometimes you just have to look at someone’s face and the expression they make to understand exactly how something makes them feel. And in that moment you know why they do the things they do. You don’t necessarily justify their actions but what they’re doing makes sense to you because you’ve gone on this journey with them.

The parasite movie is a beautiful movie, wonderfully acted, impeccably shot. The musical score is also a genius. This is easily one of the best films of the year. It’s the type of movie that comes along that really pumps me up about movies. And it makes me want to write. It makes me want to direct.

When I see movies like this, I understand that this person who made this movie loves the art form so much that he just can’t do anything else and you can feel it coming off of every frame. It’s one of my favorite movies of the year.

So I’m gonna give Parasite move an A-plus. 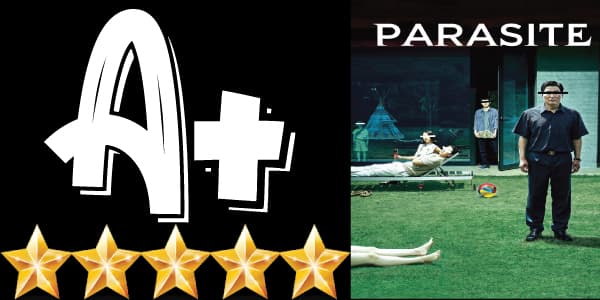 This year’s been good to me so far. I am very happy with the movies I’ve been seeing lately. I hope you guys do see this film. It is really worth your time. It’s excellent and I’m excited to see it again and analyze it more deeply. I love this movie I hope you guys do too.

Thank you so much as always for reading my review. Look forward to more reviews very soon. See next time with another movie review.