Skip to content
Once Upon a Time in Hollywood 2019 is a comedy-drama film that doesn’t feel like a movie that was made in twenty nineteen.

Once Upon a Time in Hollywood 2019 Movie Cast & Crew

Once Upon a Time in Hollywood 2019 movie Review

Once upon a Time in Hollywood was written and directed by Quentin Tarantino and stars Leonardo DiCaprio and Brad Pitt.

And this tells the story of Rick Dalton, an actor in the 60s, most known for television westerns and his stunt double cliff booth played by Pitt and their various misadventures as they try to remain relevant in the fading Hollywood golden age of 1969.

If you can tell that a filmmaker is in love with movies just by watching their movies, those are usually my favorite filmmakers.

It’s one of the reasons Tarantino has always been one of mine. I love how he approaches movies. I love his thoughts on movies. I’ve been inspired by him as a filmmaker ever since I was young and I first saw Pulp Fiction on TV, heavily edited, but still very effective.

I didn’t really know what to expect from this film based off the trailers because they seemed like a collection of moments that seemed entertaining. But I wasn’t exactly sure what the film was about.

And as most fans of his films know, sometimes his films don’t really seem like they’re about any one thing. Sometimes they are just a collection of moments, extremely well-written, very well-acted, and a great time to watch. This is exactly how I feel about this movie. It’s in a way akin to The Big Lebowski. Hold Your Horses.

I can’t say that it’s something, as you know, culturally important as The Big Lebowski. Is that film being probably my favorite comedy.

But I will liken it to that film in the sense that this feels very much like a laid-back, chill movie where people kind of hang out and talk.

Jackie Brown had a lot of scenes like that where people were just kind of sitting around. It wasn’t necessarily about anything. A friend of mine after the screening tonight said that was kind of like Seinfeld.

And I can understand why they thought that because in a way, the film doesn’t always feel like it has a narrative. And that’s one of the things I love about Tarantino.

His movies don’t follow the rules. They don’t follow classic cinema structure. You can look at his screenplays and think, how does he get away with this? And that’s what’s beautiful about what he does.

This is different from everything out there today, as is every Tarantino film that was ever put into a theater at that time.

A friend of mine after the movie said something interesting to me and I thought about it on the way home. And he’s completely right. A lot of people nowadays are sort of arguing against the Hollywood star.

Do we really need this super famous person to sell a movie? Not so much anymore. That’s obviously a fading thing.

We’re not seeing as many of these gigantic Hollywood stars anymore. And movies are based around concepts or a genre that everyone loves or how profitable it can be.

But in the case of this movie in particular, it is a fantastic argument for the Hollywood star because Leonardo DiCaprio and Brad Pitt make this movie so elevated.

There are scenes where these two characters just sit down and watch an episode of a TV show that they worked on.

And the entire shot is just the TV. And we’re watching the TV show that they’re in and they’re waiting to appear and you hear their commentary in the background.

This would not work as well without those two actors doing it. And my friends and I who often do that when we watch movies, we’re just very entertained by seeing these two megastars do the same thing that we do when we sit down and watch something that we’re excited about.

The film is filled with scenes where characters are just kind of hanging out, talking.

If the lack of a constantly compelling narrative is an issue for you, you might find this film boring. And there are aspects of the film that did sag a bit.

The second act does have a lot going on that doesn’t really feel like it’s of much interest. There’s a sequence in which time jumps and an absurd amount of voiceover is required to explain where things are going.

Tarantino has done this many times before and sometimes we give him a pass on that because we just say, well, that’s just something Tarantino does.

Well, yeah, he does. But it’s also kind of lazy. And there are aspects of the second act that feel like, OK, where’s this going? Let’s get back to where we were.

I love the first and third acts. They are phenomenal. I love watching these characters. I love just about every choice he made with placing them in weird scenes.

But throughout the second act, there’s a severe lack of tension. The film didn’t have enough buildup.

There’s even a scene that felt like it was leading to something in this old house in the middle of the desert. But it just kind of went like that.

I would say is my biggest flaw with this movie is that there is a lack of tension. You go to a Tarantino movie expecting some things. There’s the amazing opening in Inglourious Basterds, the milk scene, one of the greatest scenes ever.

This movie is not as interesting in that as I’ve already said, this is a very laid-back film, especially for Tarantino.

Out of all of his filmography, I would say this is the most reliant on comedy. It’s a very, very funny movie. There are some extremely weird and awkward scenes, embarrassing stuff, hilarious stuff.

There’s an entire five-minute sequence involving a fight scene that is almost entirely built around one joke that happens afterward.

And without that five-minute scene, the joke that happens afterward would have no weight to it. But it does because he is that committed to one joke. And it’s kind of amazing.

So if you go to this movie expecting to be constantly riveted by a tense narrative, you are not going to like it because this is a comedy and it’s a damn good one.

One of the reasons the comedy works so well is because Leonardo DiCaprio’s character as this fading star who’s beginning to feel as if he’s irrelevant.

He feels kind of like a dying breed. He’s this action guy who shows up on TV, shoots a guy and punches somebody, and then walks away. And he’s starting to notice that film and TV beginning to move past that and doesn’t know where he is.

And because he plays it so seriously, the comedy works so well because you sort of want to laugh at how endearing he is.

But he plays it so pitch-perfect that it makes it even funnier. If this character had been in on the joke, it would not have worked.

He has to be completely level throughout the whole movie and he is, which gives Brad Pitt so many moments to just be so goddamn hilarious.

I loved him in this movie. He was my favorite part of the film by far. He has so many incredible scenes. He gets most of the best lines. And I loved his work in this movie.

One disappointment I would also add to the movie is that Margot Robbie, Sharon Tate had very little to do. This could be because of a few things.

Since this is a real historical person who was horrifically murdered, it’s possible that Tarantino didn’t want to take this character and kind of manipulate that.

At the same time, she’s in the movie a lot, and she doesn’t really bring that much to the film beyond, oh, Margot, Robbie. I like Margot Robbie and there she is on screen. And there’s not that much to her character. She’s not very integral to the movie.

And you can sort of look at the movie and wonder if she really even has to be in the film for the rest of the plot to work.

For the third act. Obviously, he wanted to take what happened and do some things with it, which of course I won’t get into because I loved it. I fucking loved it, by the way. I just roared. There is an incredible scene that is one of Tarantino’s best towards the end. If you roll with it and you like the direction it goes, you’re going to love it.

But there’s not really a point to her character beyond getting to play around with the Manson thing. Beyond that, she doesn’t have much of a place in the movie as a character.

I feel like it’s almost pointless to say, but obviously, this movie is shot impeccably. The production design, the sets the streets of L.A. that have been converted to look like the 1960s is absolutely stunning.

It seems like it has the potential to be one of those midnight movies that fans start to pick up and appreciate more over the years go along.

Because I feel like a lot of people will see this movie initially and think that was kind of boring, actually, because it really is just a bit of a hangout movie, which I welcomed.

This movie is a 1960s film. Tarantino is clearly, as we’ve learned from all of his other movies, very inspired by that decade of cinema, and this movie does not feel like a product of today.

And that’s what I love about it. You don’t get movies like this anymore and I will always support that.

I’m going to give Once Upon a Time in Hollywood 2019 movie an A-minus. 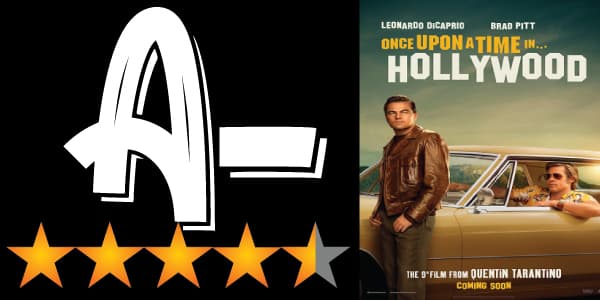 If you love film, you’ll probably find something about this to really enjoy. Thank you so much, guys, as always, for reading my reviews. Look forward to more reviews very soon. See you soon.

Once Upon a Time in Hollywood 2019 movie Trailer

Check out Once Upon a Time in Hollywood 2019 movie Trailer