Old 2021  is an American mystery, thriller, and Horror film by M. Night Shyamalan. The film is an hour and 48 minutes and it was released in theaters on Jul 23rd, 2021.

A thriller about a family on a tropical holiday who discover that the secluded beach where they are relaxing for a few hours is somehow causing them to age rapidly reducing their entire lives into a single day.

I want to start this review off by saying that I am a huge fan of M. Night Shyamalan, despite the fact that he nearly ruined one of my favorite television shows of all time with the last Airbender still too soon to talk about it.

I still think the director is a very talented man who has a litany of brilliant ideas.  He also knows his way around a film and how to shoot and frame one beautifully

So it is much to my dismay to have to say that his new film Old, showcases all of M. Night Shyamalan’s most major flaws. And while it is not an outright disaster, it is an enormous disappointment.

The movie itself is pretty self-explanatory, so I’m not going to dive into a bunch of details about it. Basically, we have an ensemble cast who go to a private Island and they all start aging really quickly.

I’m very curious to check out the graphic novel Sandcastle that M. Night has faced this film off, just to see how much more nuanced is than his screenplay.

One thing that I think almost all Cinephiles can agree on is that the writer director has a difficult time with dialogue. And to make matters worse, he is also not an actor’s director.

Meaning he mostly lacks the capabilities of being able to elevate actors’ performances with his direction. So add those two flows together and it’s a double-edged sword.

And with all his screenplay is the definition of thinking that it’s smarter than it actually is. His dialogue is so clunky and unnatural. And worst of all, most of his actors feel completely lost in this muddled mess.

I think the biggest thing here is that it has not given this large ensemble cast of characters any development. The movie spends about 10 minutes throwing these characters at us, giving us the most basic bare bone setup. And then in the blink of an eye were at this Island and crazy shit starts happening.

He then proceeds to start attempting to give us all of that development that should have been done ahead of time on this Island amidst all of this chaos, and it doesn’t work.

So all of the emotional beats the director is going for, all of the tension, all of the investment we should have had with these characters, it’s all completely lost.

On this Island, as you all know, time is moving very quickly, and we are not given a second to breathe or digest what is actually going on because the film progresses in such an unnatural absurd way.

Some people are going to say that this is because that’s exactly how it would feel in the moment, and everything is a blur in total chaos.

And I understand that. But M. Night is far enough along in his career that he should know how to construct a three thriller in a more effective way.

All of this to say that I did not hate my time with Old. I was engaged for most of the runtime, and there were moments that I was on the edge of my seat.

And while many people are going to be expecting a huge M. Night twist, he does play it a little bit more obvious and safe this time around. But I still think it worked. And there were some subtleties of said twist that I did not see coming.

The Old movie is so gorgeously and ingeniously shot. There were so many times throughout this movie that I was in awe with the filmmaking at hand.

And of course, that is going to be divisive as well, because some people are going to come out hating that aspect. But I love the fact that M. Night plays tricks on the audience in such a cheeky and creative way with his camera work.

It reminded me why we still go see his films. But at the end of the day, with Old, his flaws outweigh his achievements, and he provides us with something so convoluted, inconsequential, and silly that it nears his work on the happening.

It’s time for him to take a back seat and let someone else steer the ship on his next go-around. Because of this disappointment in his work, it’s getting old. 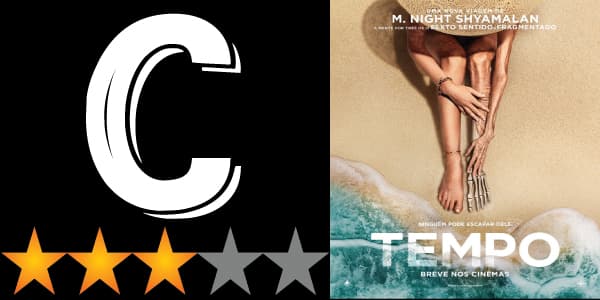 Despite some creative plotting and direction, M. Night Shyamalan Unfortunately delivers another cheesy and awkwardly constructed film that thinks it’s far more intelligent than it actually is.

Guys thank you so much for reading the review of Old movie 2021. See you soon.