Nobody 2021 is a drama action film, while not a new premise, seeing Bob Odenkirk beat the tar out of people is very entertaining.

Nobody comes to us from the director of Hardcore Henry and stars Bob Odenkirk as a guy that nobody looks twice at. He’s got a seemingly average life, a loving family, a wife, two kids he cares about, and an older father in a care facility played by Christopher Lloyd.

But there’s something else under the surface. You can tell there’s something he’s hiding, perhaps a past that we don’t know about. And eventually, because of a series of mishaps, it turns out this guy is a nobody at all.

In fact, he’s got a particular set of skills and he’s going to turn them loose on a bunch of unsuspecting bad guys. By no means is this a new or original fresh piece of filmmaking. In many ways, this is a film we’ve seen a lot.

The writer of this film, Derek Kolstad, also wrote the previous three John Wick movies. And in many ways, this feels like a copy and paste variant of a John Wick first draft.

We have a middle-aged guy this time he has a family, instead of being a total loner. He has a violent past and an organization that we know little about, but eventually discovers some things.

And because of a series of unintentional interactions, he gets caught up in a violent world once again and has to use all of his skills to protect those he cares about or just himself.

In many ways, this is a John Wick clone. He even has gold in his basement.

But what does make the film fresh is the unique casting choice of one Bob Odenkirk as this ass-kicker. A role that I would never in a million years believe he would play and he crushes it.

He is so phenomenal in this movie. It’s not only a very entertaining performance, a very comical performance. He gets a lot of laughs.

He’s a total badass in the movie and does most of the stunt work and really nice wide shots, just like the John Wick franchise. And so you can see this guy killing people in horrific ways constantly.

He impresses so much in the film. I loved him in the movie. He is easily the reason to see it. He is the main draw and I would like to see him do more things like this.

This is something we’ve seen a lot lately. You get an actor who’s mostly known for one thing, throw him in a weird violent action movie or a horror film like Kevin James playing a neo-Nazi and Becky. Not the type of casting most of us ever would have predicted. Same with Bob Odenkirk playing a brutal killer.

But what I also really liked about his role in the film is that he’s not exactly like a John Wick type and that he’s perfect. He walks into a room and waves his hands and everybody just dies. He actually gets his ass kicked a lot in the film.

For all the havoc he wreaks in this film, he gets thrown through a lot of glass windows as well, gets a lot of bones broken. So he has some vulnerability to him. There’s humanity there that you can latch on to.

I love the John Wick movies, but Keanu Reeves really makes a lot of that work because even when he’s being kind of perfect in a fight scene, he seems kind of like he’s struggling a little bit, like he’s getting very frustrated by it, even though he’s so good at what he does.

Here in a film like nobody, Bob Odenkirk’s character seems like it’s hard for him because he is older, because he’s not quite as polished as some super agent.

He was more of a fixer type of character where he would go in and make sure that somebody pays the money they owed.

So even though he’s really good at killing people, it’s not exactly easy for him, which makes the character really fun, although towards the end he does kind of become a little bit perfect. And we get that obligatory shootout sequence where everything just happens and a beautifully choreographed cacophony of blood and gore, which I must admit was very entertaining.

I also quite like seeing Christopher Lloyd do some really brutal things in the movie that I don’t want to get into because it’s more exciting for you to just see it.

But all in all, the things that made this movie work were the casting choices. And the direction is very good. The action is filmed very well. It’s not as kinetic as the first-person POV perspective of hardcore Henry.

But there’s a lot of styles and the sequences are really exciting.

The villain and the movie is incredibly weak. However, he is a karaoke singing guy who will kill you if you say the wrong thing and then he’ll go sing karaoke.

It kind of reminded me of only God forgives. He was a nothing character, even in the culmination of his presence near the end, which again, I’m trying to say this carefully. It didn’t seem like much of anything happened.

The villainous presence in the movie, again, seems like an accident, like a series of mishaps led to this thing that has to happen.

It’s a very similar thing that happens in John Wick. They killed the wrong guy’s dog and they’re kind of fucked up Now.

In this movie. It’s a little bit different. It starts out kind of as a bracelet but eventually becomes something else. And it feels like the movie occurred because of happenstance.

A lot of coincidences had to happen for the film to play out, and it doesn’t feel as polished from a narrative perspective. There really is no depth to be found in the movie at all.

Very few characters I cared about. Mostly it’s just an entertaining film that occasionally is kind of funny and Bob Odenkirk is really entertaining to watch as an ass kicker.

But besides that, the movie doesn’t really have much longevity. I found myself forgetting it pretty quickly. 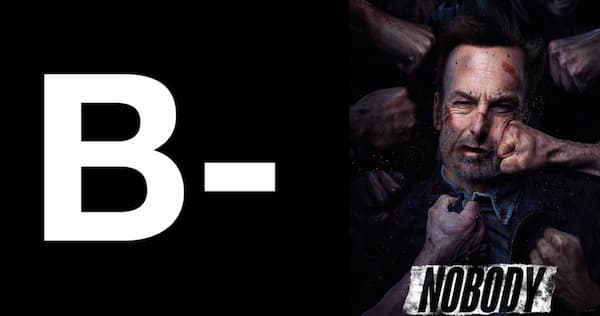 Still, I do think you should see it, because Bob Odenkirk put a lot of work into this movie and obviously the stunt people did as well.

It’s an extremely well-handled production from an action standpoint. Everyone did great work and it should be supported.

Guys, thank you so much, as always, for watching. See you next time.