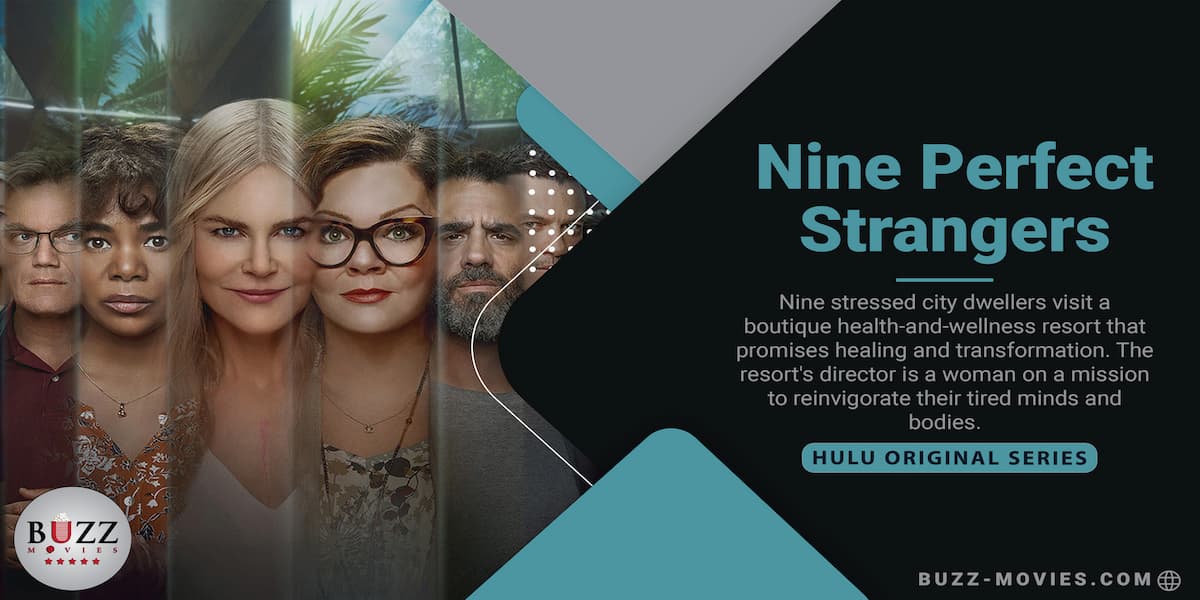 Nine Perfect Strangers is a Drama, Mystery, Thriller Hulu Original Series based upon the bestselling book of the same name by Liane Moriarty.

Nine stressed city dwellers visit a boutique health-and-wellness resort that promises healing and transformation. The resort’s director is a woman on a mission to reinvigorate their tired minds and bodies.

As far as limited series go, even though it did get a second season, Big Little Lies is probably one of my favorites of the last decade.

David E. Kelley created something really special with that show that captured the lives of modern women in a realistic way who are all stuck in a horrible predicament.

It was a mix of soap opera, character study, and mystery thriller, with one of the best cast imaginable and assured direction by Jean-Marc Vallée.

So Kelley is looking to strike lightning twice with Nine Perfect Strangers based upon another Liane Moriarty novel.

And while I do think that this show is going to be a hit for Hulu after watching the first six episodes, this is just nowhere near on the same level as Big Little Life.

The setup here is really intriguing. We have a group of Nine strangers coming together who are all damaged and broken, looking for healing at a wellness spa.

The establishment is owned and run by a mysterious Russian woman who is being targeted by an anonymous source who wants to take her down.

These strangers lives are all put through the Ringer as we slowly learn more about them and why they have been handpicked by this woman to be a part of this healing experience.

Kelley had the chance to replicate his success from Big Little Life here in every way. He has collected one hell of one sample cast, with Nicole Kidman leading the way once again.

And the story itself lends its way to another thrilling mystery that is backed by profound character development.

And I’m just going to say this right now, I am not familiar with the source material, but what happened here?

Well, to start off, very few of these characters are actually all that interesting. Many of them land into such a cliche stereotype from the very get-go, and you can feel the actors trying to claw their way through this script to provide us with something more meaningful.

As a huge fan of Melissa McCarthy, it pains me to say that this is another misfire performance from the talented actress.

It also doesn’t help that her husband once again shows up here and at times it felt like they were pushing to make it the Melissa McCarthy Ben Balcony show rather than the ensemble piece that it should have been.

And then we have Nicole Kidman, who Whales ethereal and whose backstory is quite fascinating, is unfortunately held down by a very misguided Russian accent that leaves in and out without abandon.

Luckily, many of the other cast members fare a little bit better here with their roles. The huge standouts for me are Michael Shannon, Asher Keddie, and Grace Van Patten as the sole family in this bunch of Strangers.

Michael Shannon, one of the best character actors working today, is fascinating to watch as Napoleon, who, along with his gorgeous wife and daughter, are dealing with their grief over a lost family member.

These three provide such thoughtful performances and also get some of the most gripping parts of the series.

It’s a shame that it all gets a bit muddled throughout the noise of some of these other characters’ stories though.

My other issue with Nine Perfect Strangers is that after six episodes, I still don’t know why I should be watching.

The mystery of the Wellness Spa and its owner is revealed pretty early on, and then it just kind of continues to devolve into a mess of psychedelic nonsense.

I wish this series would have taken its time to reveal its secrets, because now, with only two episodes left to go, I’m left wondering why I should continue to care.

But will I continue you watching these final episodes? Of course, though I have many issues with Nine Perfect Strangers, there is enough meat on the bones of this story to make me at least mildly interested to see how this wild experience and the characters involved all end up.

The cast is doing the best that they can to make this series worth watching, and director Jonathan Levine, who helmed The Wackness and 50/50, adds his own unique charm to the proceedings.

There’s just something missing here that makes this show about healing and overcoming brief seem a bit empty inside.

And I know many critics will be comparing the two shows, but HBO’s The White Lotus tackled a lot of the same subject matter in a far more gripping, satirical, and nuanced way.

So I am going to give Nine Perfect Strangers a C. 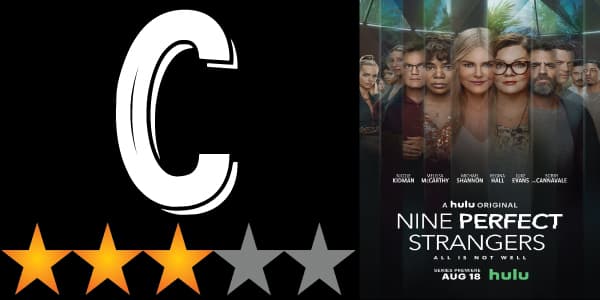 This is a very ambitious series with an impressive test who are all willing to give it their all, even if they’re not all successful.

And although the premise starts out intriguing, it slowly falls off the rails to become an experience that does not add up to the sum of its parts.

So I will be saying that you should watch this series if you have nothing else to watch. Once again, Nine Perfect Strangers has a lot to offer, but it is a very flawed and disappointing show so far.

I’m still hoping that they are able to pull it all back together and salvage what they started in the last two episodes Though.

Guys thank you so much as always for reading the review of Nine Perfect Strangers a new Hulu Original Series. See you next time.

Check out the trailer of the new Hulu Original Series (2021), Nine Perfect Strangers.