A lavish high society wedding unexpectedly turns into a class struggle that leads to a violent coup.

As New Order begins, we immediately know we are in for something really artsy and bleak as we get glimpses of modern art and a naked woman standing juxtaposed with nude, bloodied bodies trampled on the ground. And if anything, it’s certainly grabbed my attention. And New Order never lost that.

As the film progressed, it became more and more brutal, sickening, and cataclysmic. The film had my undivided attention.

Even when what was happening was so on the nose. There were moments my eyes wanted to roll in the back of my head, but I wouldn’t let them because I had to see what happened next.

After that brief montage of images, the film opens at a wedding in a mansion that is obviously home to an elite and well-off family.

The daughter Marian is getting married to Alan. But when an old member of their House staff shows up unexpectedly asking for money to pay for his wife’s surgery, the line of class begins to be drawn.

Marian’s mother gives him a fraction of what he needs, so he will just get lost. But the young woman who obviously has a bigger heart than the rest of her family tries to collect enough for him until she realizes no one at her own wedding will help her out.

So she decides to go pick up his wife, take her to the hospital and pay for the procedure with her credit card. While she is gone, a cool rises invaders take over the home and chaos ensues bringing on a new order.

The first act of this film is superb, in my opinion, as it takes place solely at this luxurious home during this grandiose wedding party.

And it’s almost constructed as a stage play would be. We’re getting to know all of these characters, the rich and the poor, the elites in the house staff, the upstairs and the downstairs.

All the while are bride to be goes around trying to collect enough money for this man who had worked for the family for ages to save his wife.

This worked the best for me because the confined space of the home allowed for the storytelling, character development and messaging to feel controlled.

And I knew invaders were going to come to the house from the plot synopsis and the trailer. But writer director Franco could have easily had the whole film take place at this one location during the coup.

And everything he was trying to convey would have felt more methodical and refined rather than messy and rudimentary.

The moment the film steps foot outside of the mansion’s walls and into the real world, it’s as if Franco loses his grasp on his storytelling and decides to go AWOL.

That’s not to say that the film loses its visual flair or its high production values, because this movie is absolutely beautiful,

Even when what is depicted on screen is horrific and the performances are fantastic across the board. But it’s the storytelling that was really lost for me.

As the country goes into a police state, Marian doesn’t know who to trust and everything devolves into mayhem.  As a viewer, you have no idea what is going to happen next, which is why it is so hard to look away.

Franco shows us time and time again that he is willing to go there to make his point, whether it be with gruesome, senseless violence and rape, killing off characters left and right, or just making you feel disoriented just as you would be in a situation like this.

And many people will be turned off by all of this, though I have seen far worse. Whether he is cross the line is really up to you to decide if the message warrants the savagery.

Franco also knows how to make your blood boil. As I haven’t been this upset by character’s actions and wanting to punch a hole in the wall since Judas and the Black Messiah.

The military and government swoop in to try and save the day. But really, they just use this as a means to pillage and take advantage of the situation to even further uproot societal structures.

I do appreciate that Franco does not really take any political sides. If anything, he takes the side of cynicism and apathy for the human race.

Both the rich and the poor are the victims and the perpetrators of this film. They are both to blame for the downfall of society, which means we are all responsible whether we like it or not.

Although the messaging comes off loud and clear and the ending wraps it up satisfyingly. But a new orders distinctly bleak and far too precise way. I couldn’t help but you going back to the fact that I felt like Franco had taken the wrong path with his film.

The characters were lost in the dizzying brutality, the story squandered among the ruin of the city. And all that I felt was left was Franco’s message on where our society is at and how it could become if we don’t alter our actions and take a good inward look at ourselves.

And that’s all fine and dandy, but Bong Joon-ho’s Parasite already did that in a much more nuanced and easier to stomach way. 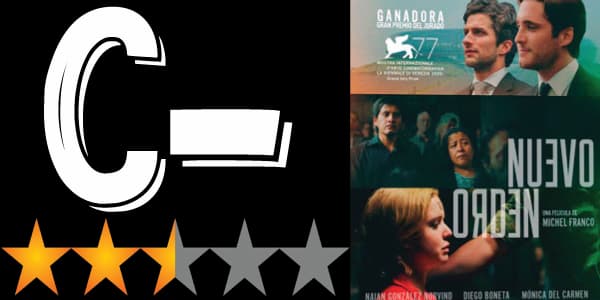 This is a visually stunning, superbly acted film that will ignite some very exciting, important conversations. It will also be divisive because of its exploitative nature and on the nose storytelling and messaging.

For me, I’m right in the middle because I think Franco had what it takes to create a masterpiece, but went the way of creating something that feels hollow when all is said and done. Also, I like my films to have a light at the end of the tunnel, even if it is a dim one.

New Order will be released in select theaters Friday, May 21st.

Guys thank you so much for reading the rview of New Order 2021 film. See you next time.

Check out the trailer of the new Mexican-French Drama, Thriller film,New Order 2021.