We may have entered 2022, but let us not forget to reflect on the previous twelve months. In this article, we’re going to take a look at the top 10 Netflix Korean Dramas from 2021 that lived up to their hype, entertained us, and made it difficult for us to go on and let go of the characters and drama itself.

Two brave men are on the hunt for a serial killer. A Detective who was demoted is one of these fearless men starting to settle into a quiet life. A new superior Detective enters his life. Entering the story is an elite Detective who holds a secret.

A string of murders occurs, prompting these men to pair up to apprehend the culprit. Beyond Evil is a well crafted crime mystery drama.

The mind games it plays with the audience are satisfying. It’s a terrific touch that even our lead characters innocence is called into question, increasing everyone’s interest and enthusiasm in the drama.

Beyond Evil won three out of its seven nominations for the 57th Bakes and Arts Awards among the awards it took home is the best Drama. There are lots of different reality shows out there. However, an unusual reality show will unfold on your screens in this drama.

A courtroom will be the subject of a reality show in which a head trial judge ruthlessly punishes the guilty, earning him the title Devil Judge.

Our male protagonist’s identity and intentions are shrouded in mystery. Now the question is, is he truly a hero the public could trust?

The Devil Judge takes viewers into a dystopian version of present day Korea in the middle of the drama’s unpleasant scenes and events, these all come together to make The Devil Judge a well written and portrayed drama.

Viewers will be drawn in by the connections between the past and the future and the unraveling of mysteries. Follow the journey of a man who joins the military’s defector arrest team. His job is to capture deserters. He’ll also have to deal with the issues of why other soldiers feel that they had no choice but to go absent without official leave.

D.P. is based on a popular webtoon. This military drama top Netflix’s top ten in South Korea. And if that wasn’t enough to persuade you that this is a fantastic series, take a look at this. Dp is returning for a second season and has been chosen as one of The New York Times Best International Shows of 2021. Having both beauty and intelligence does not guarantee success in life. A dentist who appears to be living the perfect life has her plans completely shattered. She moves to a seaside village one day and meets Chief Hong.

Who is this Chief Hong? Even though our male protagonist is unemployed, he is a Jack of all trades. He provides help to people living in the area. Will he also help our female protagonist or will she be the sole exception?

Hometown Cha-Cha-Cha is a therapeutic and feel-good drama. It stars Shin Min‑a, one of the highest-paid Korean actresses today, and Kim Seon‑ho, a rising actor. Here comes one of the best historical Kdramas of 2021, The Red Sleeve. Take a trip back in time to the 17 hundreds. Join us as we follow a perfection-loving Prince.

As he seeks to reform the law once he ascends to the throne. The young Prince encounters a young woman one day and she manages to captivate his heart.

Our male protagonist wishes to make her his official concubine. On the other hand, our female lead is free-spirited and those that being a Royal consort will limit her freedom. So will she accept his offer?

The Red Sleeve is a Kdrama gem you shouldn’t miss. It’s a well-written drama that shows how to tug at your heartstrings and might even make you cry, so be sure to keep that box of tissues nice and close.

This is the first acting role of Lee Jun‑ho since he was discharged from his military service. Did you know that due to the popularity of The Red Sleep, the drama was extended by one episode?

It also wrapped up with high ratings and it won all eight of its 2021 NBC Drama Award nominations, including Drama of the Year. Make way for Vincenzo Casano, a Mafia consular you do not want to mess with. Vincenzo adopted at a young age and brought to Italy, returns to South Korea as the Mafias go to war. Back in his homeland, he encounters a confident lawyer willing to go to any length to win a case.

Anyway, Vincenzo is eyeing a particular building. It makes us all wonder why. Vincenzo is one of the most popular and well-received Korean dramas of 2021.

For drama fans, it was quite difficult to say goodbye to the Gomga Plaza family and our one and only Song Joong‑ki. Its hefty production cost was well worth it because the actors all delivered brilliant performances.

Whether they were the leads, villains, or supporting characters, everyone’s role uniquely stood out. The swooning for hourly couple does not stop as the two trended after Song Joong‑ki, look back at the red carpet to look at his costar.

Jeon Yeo‑been, when her name was called at the 2021 Busan International Film Festival and to put the cherry on top, the two were spotted reuniting backstage. A deadly virus begins to spread across the city. Happiness shows people from many social classes in a quarantined apartment building. Residents are now fighting for their lives to avoid the disease and social conflicts.

Let’s get to know a few of them.

One is self-righteous while also possessing good judgment. We’ll also get to see how a Detective deals with the challenges of keeping the residents all secure.

Happiness also introduces us to a pharmaceutical company executive. Happiness marks the first acting project of Park Hyung Sik, since his discharge from the military. Don’t be deceived by the title of this drama.

Happiness will take you on an emotional roller coaster ride. Our lead couples lovely and enduring interactions in real life are a hit with the viewers.

From their drama interviews to their Instagram comments, actors Park Hyung‑Sik and Han Hyo‑joo display a sweet friendship. Navillera tells the story of two men, one in his 20s and the other in his 70s, now retired, wishes to pursue his lifelong dream of becoming a ballet dancer.

Along the way, he meets a young man who is struggling in his life and whose passion for ballet is fading away. Thanks to Song Kang and Park In‑Hwan outstanding performances.

This ballet drama captured a place in our hearts. When the news of Ballerina Song Kang surfaced, everyone went crazy and our rising actor did not let us down.

Song Kang was praised for his dedication to practicing ballet and demonstrating significantly improved acting abilities.

The actor spent six months learning ballet. He may not be a professional, but he showed us graceful moves and his performance made him look like a natural.

Song Kang’s father was a gymnast, so maybe elegance and flexibility run in the family. Our comfort drama came back for another season in 2021. Hospital Playlists continued telling stories of our five doctor friends and their ordinary but extraordinary lives.

These doctors have been buddies for a long time, having attended the same medical school and now working in the same hospital.

Follow their day-to-day activities both inside and outside the hospital. The way this drama hits home and the lovable characters drew the majority of people in.

The character’s chemistry is fascinating to watch. Did you know that their relationship doesn’t end with the hospital playlist?

The dramas actors still have strong chemistry be it in interviews and variety shows. Everyone enjoys seeing them all together in one frame, whether they’re on or off the drama set.

The series is also among the highest-rated Korean dramas shown on cable television. An autistic man works for his father’s company. Move to Heaven their job includes arranging belongings at the deceased had left behind in this world.

They go as a pair but the young man’s father passes away one day. Now that he is alone, his uncle who was once a martial artist and he was from prison suddenly appears in his life. Together they’ll continue running Move to Heaven.

As each episode of Move to Heaven rolls onto your screens, it will certainly move you to tears as it shifts from one story to the next.

The beauty of this life drama is that it covers a variety of stories deep meanings that will touch our souls. It’s a good thing Move to Heaven made it to our screens, because it was previously reported that this drama was one of the many productions that were stopped due to cover 19 in late 8/20/2020. This one is well worth your time. 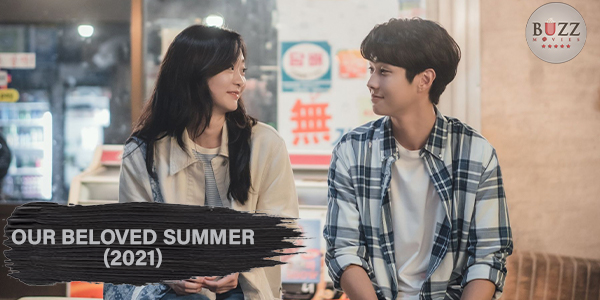 Our Beloved Summer tells the story of two ex-lovers who reunite in front of the camera years after filming a viral documentary in high school. Our male protagonist is a free-spirited individual, meanwhile, our female protagonist who previously aspired to be a top student now lives her life fiercely.

Our Beloved Summer stars Choi Woo‑Shik and Kim Da‑mi, these two actors previously worked together in The Witch: Part 1. The Subversion and even before the drama aired it made headlines and trended because one of the songs on the soundtrack is sung by BTS V, who is good friends with Choi Woo‑Shik.

In 2021 KoreanDrama land provided us with a variety of time with Korean dramas. We’re hopeful that 2022 will bring us new key dramas to add to our list of favorites.

My score for this list is seven out of ten. How about you make sure to leave your score in the comments section at the end?

Anyway, what is your favorite Korean drama from the year 2021 let us know in the comments section down below. See you next time.